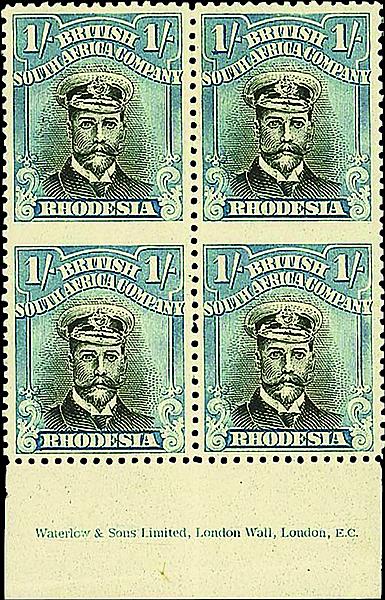 Considered a unique multiple, this Rhodesia block of four of the 1-shilling black and dull blue with missing horizontal perforations sold for $91,500 in the June 17 Spink auction of the collection of Baron Vestey.

In London, Spink held a number of sales over the summer featuring stamps of Great Britain and its onetime empire, including some unusual rarities.

Many items came from the collection started by the first Baron Vestey, a pioneer meatpacker, in the 1930s. On June 17, Spink sold his collection of the popular Arms and Admirals definitive series from the former colony of Rhodesia.

Set up by the British South Africa Company, the remote colony’s postal service was, at first, limited. High-denomination stamps were produced, but undoubtedly saw use almost exclusively for fiscal rather than postal purposes.

An unused bottom-margin strip of four of the £20 Coat of Arms stamp (Scott 75A), not uncommon with revenue cancellations but very scarce otherwise, sold for the equivalent of $49,750, including the 20 percent buyer’s premium Spink adds to all lots.

The many die, color and perforation varieties of the King George V series of 1913-23, nicknamed the “Admirals” for the monarch’s naval uniform, give collectors who enjoy specialization a lot to work with.

The higher values of the Admirals series were prepared from three different engraved dies of the king’s head, known as I, II and III and distinguished by details of the king’s left ear (the ear at right, from the collector’s point of view) and cap.

Making matters more complicated, most values were perforated both gauge 14 and gauge 15, and issued in a range of color shades. Advanced specialists also distinguish different printings by paper and gum type.

A mint, never-hinged corner margin block of a scarce 2-penny variety, printed in black and brownish gray from die III and perforated 15 sold for $57,700. The stamp is No. 279c in the Stanley Gibbons catalog published in Britain, and newly listed in the 2014 Scott Classic Specialized Catalogue of Stamps and Covers 1840-1940 as Scott 122d. The block is considered unique.

A bottom-margin block of four of the 1-shilling black and dull blue Admiral, with horizontal perforations between the stamps missing (Stanley Gibbons 300b; a variety of Scott 130), was described as a unique multiple of this error and a “remarkable showpiece” on account of the Waterlow & Sons imprint on the margin. It sold for $91,500.