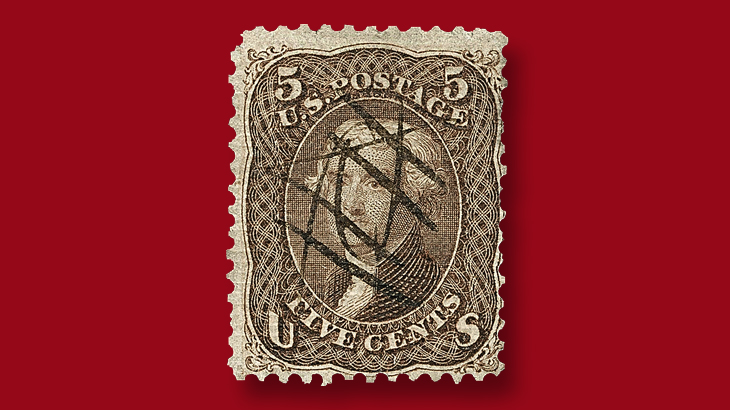 One of four known examples of the 1867 5¢ brown Thomas Jefferson stamp with an allover “A” grill (Scott 80) is offered in Robert A. Siegel Auction Galleries’ Dec. 12 sale of the Richard Drews collection of United States 1861-68 stamps.

Robert A. Siegel Auction Galleries will present the Richard Drews collection of United States 1861-68 issues in a public auction to be conducted Dec. 12 in New York City.

“Richard Drews has collected and studied the 1861-68 Issue for more than 40 years. His exhibit collection of this issue has garnered numerous awards, including the American Philatelic Society’s coveted Champion of Champions in 1997, and Large Gold medals in international competition …” Siegel president Scott R. Trepel wrote in the foreword to the sale.

The sale includes essays and proofs and off-cover stamps with multiples and rare varieties, shades, papers, printing varieties and grills.

Of the many standout items is a used example of the 1867 5¢ brown Thomas Jefferson stamp with an allover “A” grill (Scott 80), one of four known. The auction house calls this stamp “one of the keys” to a complete collection of U.S. stamps.

The stamp is listed in the Scott Specialized Catalogue of United States Stamps and Covers with a value of $260,000 in italics, indicating an item that can be difficult to value accurately.

The sale also offers an original-gum example of the 3¢ George Washington stamp printed with the pigeon blood pink shade (Scott 64a). Siegel said the last time it sold a similar stamp was in 1993, adding that the Philatelic Foundation has certified fewer than six examples. This shade variety has a Scott catalog value of $50,000, also listed in italics.

A used 24¢ lilac George Washington stamp (Scott 78) with a Waterbury, Conn., Bridgeport Fireman fancy cancel is also up for sale. The auction house noted that the use of this cancel on this stamp is likely unique. The stamp has an estimate of $5,000 to $7,000.

The lots in the upcoming Siegel sale can be viewed at the website, with online and other bidding options available. Additional information about the sale also is available from Robert A. Siegel Auction Galleries, 6 W. 48th St., New York, NY 10022.