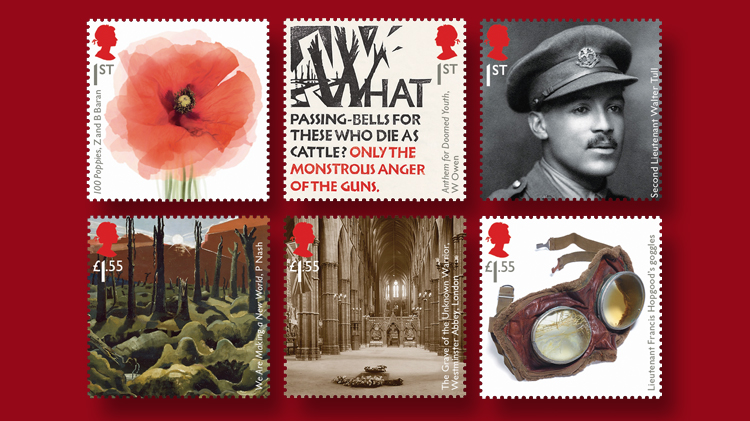 As in the previous sets, the first three stamps in the new set are nondenominated, paying the first-class rate (currently 67 pence).

These stamps feature 100 Poppies by Zafer and Barbara Baran, a quotation from the poem Anthem for Doomed Youth by Wilfred Owen, and a photograph of 2nd Lt. Walter Tull.

Royal Mail explained how the Barans photographed 100 poppy flowers and layered the images together: “Each of the poppies was freshly cut and carefully lit before being photographed, to capture the flower’s delicate luminosity. In the final artwork, the light gently filters through the overlapping petals, giving this composite image a ghostly, fleeting appearance and suggesting movement.”

In the poem Anthem for Doomed Youth, British Army officer and poet Wilfred Owen laments the terrors of war. At just 25 years old, Owen was killed in action in 1918, a week before the armistice treaty.

The stamp includes the opening line of his famous poem: “What passing-bells for these who die as cattle?" in black and “Only the monstrous anger of the guns” in red. The text is hand-carved in woodblock print by illustrator Andrew Davidson.

Tull’s great nieces and nephews commented on the stamp honoring their great uncle: “Walter’s life and achievements have been acknowledged and celebrated in a variety of ways for over 20 years. Many of these activities and projects concern challenging and overcoming inequality and discrimination.

“While this year of centenary may provide a particular spotlight on Walter’s story and life, we hope that Walter’s example will continue to encourage and promote projects that support inclusion and equality.”

Orphaned after the deaths of his English mother and Barbadian father, Tull went on to become an English professional soccer player (footballer) and British Army officer.

During World War I, Tull served in the Middlesex Regiment, including in the two Footballers’ Battalions. He became the first mixed-race Army officer to command troops in a regular unit. He was killed in action March 25, 1918.

The remaining three stamps are denominated £1.55 to pay the rate for letters to Europe weighing more than 100 grams.

The designs of the £1.55 stamps depict the painting We Are Making a New World by Paul Nash; a photograph of the Grave of the Unknown Warrior in London’s Westminster Abbey; and a photograph of Royal Air Force pilot Lt. Francis Hopgood’s goggles.

Nash was a British surrealist painter and war artist. Royal Mail said of the painting on the stamp: “He was appalled by the sight of the Ypres Salient. In We Are Making A New World — titled with bitter irony — Nash depicts a bleak and hopeless sunrise over a copse of shattered trees. The ground is pitted with waterlogged shell holes. Nash was deeply moved by the destruction of trees, seeing in their degradation a metaphor for human suffering.”

The poignant photo featured on the second £1.55 stamp shows a memorial of an unknown solider who was buried at Westminster Abbey on Armistace Day, Nov. 11, 1920. On that day, massive crowds gathered to pay respects to all lives lost during the war.

The photograph of Hopgood’s RAF goggles was taken by John Ross and is featured on the stamp with permission from the Museum of Army Flying in Hampshire, England.

On April 10, 1918, Hopgood was shot down, captured and held as a prisoner of war. Fitted with custom prescription lenses in Triplex safety glass, the goggles pictured on the stamp survived the crash.

The firm Hat-trick Design designed the stamps, and International Security Printers printed them in sheets of 50 (sold in panes of 25 at most postal outlets). The stamps are square, 35 millimeters by 35mm, and are perforated gauge 14.5 by 14.5.

In addition to the six stamps, the new set includes two booklets: a retail booklet and a prestige booklet titled “The Great War 1918,” with related text and illustrations. The information covers the German spring offensives, Allied counter-offensives, the collapse of the German army and Armistice Day.

Another prestige booklet pane has a se-tenant block of the four of the first-class poetry stamps from the previous First World War issues.

The final pane contains four definitive-sized stamps showing poppies on barbed wire from 2012 (Scott 3118A). This design originally appeared in the 2006 Lest We Forget souvenir sheet. The pane also includes four first-class Machin-head Queen Elizabeth II definitives in red, and a label in the center.

Also available from Royal Mail is a sheet of all 30 stamps that have been issued over the five-year WWI series. The sheet was produced in a limited edition of 7,500, according to Royal Mail.

The other products for this WWI set include first-day covers, six postcards reproducing the designs of the stamps, and a presentation pack with mint examples of the stamps and information about the war in 1918.