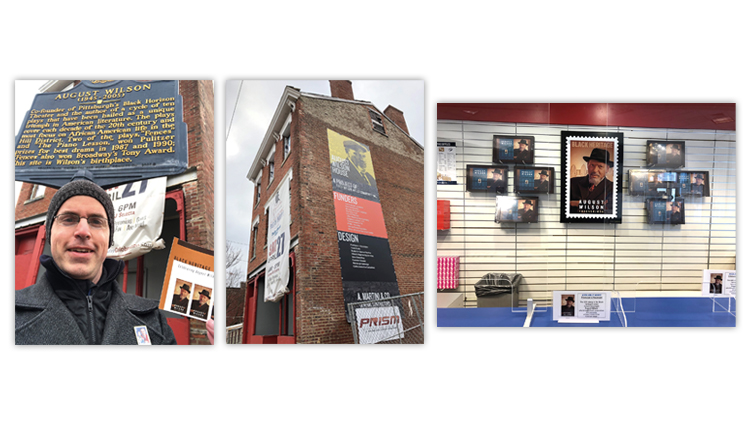 Shown is Linn’s editor-in-chief Jay Bigalke holding the new August Wilson commemorative stamp with Wilson’s birthplace in the background (left), the house (center) and the display at the Pittsburgh main post office with the stamp poster in the center.

I enjoy traveling and attending first-day ceremonies, something I have written about in this column before. When the August Wilson stamp in the Black Heritage series was announced, I found myself interested in making the eight-hour round-trip trek to Pittsburgh to purchase the stamp on its Jan. 28 first-day of issue.

And that’s what I did.

Collector Chuck Vukotich, who lives in the Pittsburgh area, shared his story with Linn’s, and that article is in the Feb. 22 issue. It seems like our paths almost crossed that day.

I received a warm greeting at the Pittsburgh main post office, where I purchased the new stamp. The post office also had a couple of large posters of the stamp and some framed art available for purchase.

The clerk even recounted to me the time he met Wilson about 10 years ago. Hearing a personal account was a nice surprise since there was no in-person first-day ceremony.

After putting stamps on postcards to mail to friends, I was able to cancel them with the first-day postmark and send them on their way.

I then made one more stop at August Wilson’s birthplace in Pittsburgh’s Hill District. Pictured nearby are three photographs I took: a selfie of me holding part of a stamp pane, the building of his birthplace and the Wilson stamp poster at the Pittsburgh main post office.

More information on the house can be found online.

Overall it was definitely worth the trip, and it was fun to pay tribute to Wilson in a small way through this new stamp issue.