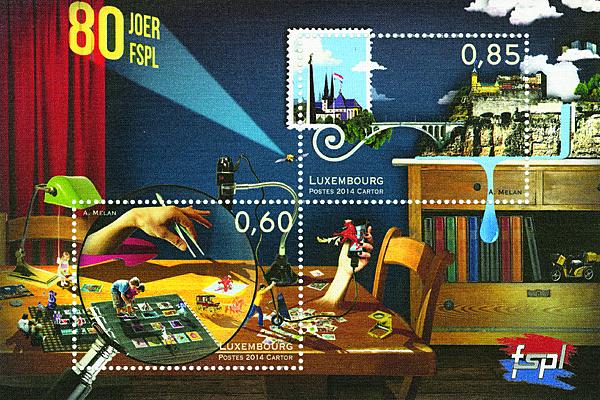 Figure 2. A souvenir sheet made of silk honors the 80th anniversary of Luxembourg’s philatelic federation. The design includes miniature-size stamp collectors looking at stamps and images of some of the country’s architectural landmarks. 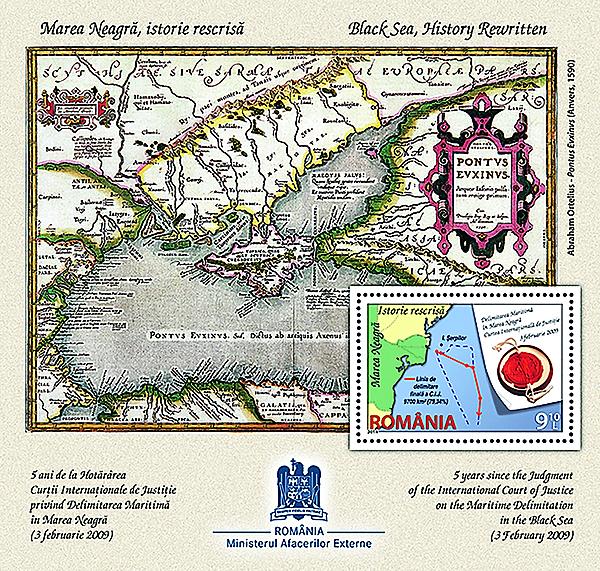 A recent stamp from Romania commemorates the fifth anniversary of the resolution of a maritime territorial dispute with Ukraine.

The issue is called “Black Sea, History Rewritten,” and these words are inscribed in Romanian and English in the upper border of the souvenir sheet shown in Figure 1. The 9.10-leu stamp also was produced in panes of 10 with se-tenant labels.

Romania released both the souvenir sheet and the pane of 10 Feb. 3.

The stamp design includes a small dot showing the location of Snake or Serpent Island in the Black Sea, which was at the center of the dispute.

The Romanian word for snake “Serpilor” is inscribed above the dot.

The black dotted line around the island symbolizes the territory in dispute, and the red line represents that 79.34 percent of this territory was awarded to Romania by the International Court of Justice Feb. 3, 2009.

A press release from the United Nations on that date summed up the case: “The United Nation’s top court has ruled that Ukrainian ownership of Serpent Island — a rocky outcrop in the Black Sea — does not entitle the country to exclusive rights to an undersea area, thought to be rich in hydrocarbons, it had disputed for decades with Romania.

“The ruling by the International Court of Justice (ICJ) marked the sea border halfway between the territorial waters of the two countries, handing Romania some 80 per cent of the disputed area in a unanimous verdict to which both parties appear to agree, a UN spokesperson said today.

“The continental shelf of that area is believed to contain considerable deposits of gas and crude oil,” the spokesperson added.

“The case concerning Maritime Delimitation in the Black Sea was opened in 2004 when Romania filed a complaint against Ukraine after half a dozen rounds of bilateral efforts failed to set the limits of the continental shelf and the exclusive economic zones (EEZ).”

The new-issue announcement from Romania called the outcome of the case the model of a settlement of dispute by peaceful means, adding that there has been no problem in the subsequent implementation.

In addition to Snake Island, the stamp pictures a map of the region with Romania in green, and a red wax seal affixed to a document with the Feb. 3, 2009, date.

A 1590 map of the Black Sea region by cartographer Abraham Ortelius is shown in the border of the souvenir sheet.

Luxembourg celebrates the 80th anniversary of its national philatelic federation on a souvenir sheet made of silk.

Figure 2 shows the sheet. According to information from Luxembourg’s philatelic bureau, the sheet is made of 100 percent natural silk, and the top layer of the paper contains 30 grams of silk per square meter.

The bureau said, “The results achieved offer a truly extraordinary, original, and silky effect that can be appreciated by everybody.”

Anne Melan, who designed the sheet, described it as a “photomontage, made up of many vivid details.”

Among these details are two miniature-size young collectors stepping into a stamp album, a magnifying glass and a giant hand with stamp tongs on the €0.60 stamp. A horse-drawn coach also is shown.

Pictured in the selvage area to the right of this stamp is another miniature collector dumping stamps out of a wheelbarrow and a hand holding a device to project a stamp image onto the wall.

This stamp image is shown on the €0.85 stamp, along with some of Luxembourg’s architectural landmarks, including Adolphe Bridge. When it was built early in the 20th century, it was the largest stone arch bridge in the world.

The souvenir sheet was issued March 11. The French security printer Cartor printed it by offset on silk.

The Federation des Societes Philateliques du Grand-Duche de Luxembourg was founded Feb. 22, 1934, and became a member of the International Federation of Philately the same year.

Today, the Luxembourg federation has 1,700 members in 35 associations.