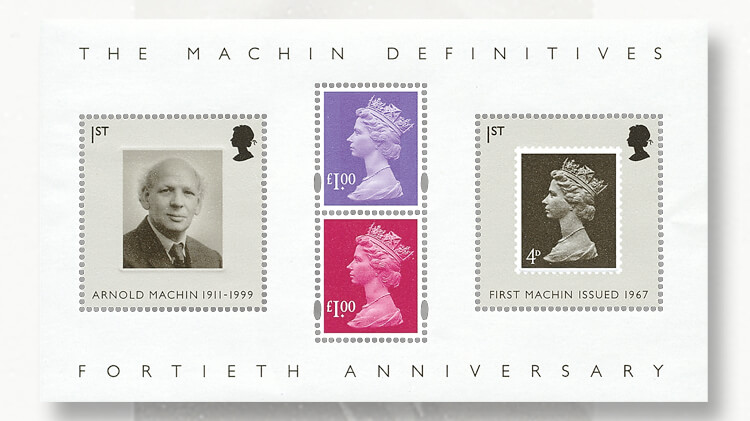 This miniature sheet of four stamps pictures sculptor Arnold Machin on a first-class stamp. The sheet was issued by Great Britain’s Royal Mail in 2007 to commemorate the 40th anniversary of the Machin stamps.

Larry Rosenblum has begun a series of articles on Great Britain’s Machin definitive stamps. The Great Britain column published April 21 on Linns.com and Rosenblum’s next two columns celebrate the 50th anniversary of the Machin series.

Machin (pronounced MAY-chin) was born Sept. 30, 1911, in Stoke-on-Trent, Staffordshire, England, to a family of potters.

He was an apprentice potter and attended various art schools, including the Royal College of Art, where he later taught.

He became a member of the Royal Academy of Art in 1947.

In 1964, the queen approved Machin’s portrait of the monarch for new coins in anticipation of the United Kingdom’s adoption of decimal currency in 1971.

Britain’s decimal coins from 1968 to 1984 show Machin’s royal portrait on the obverse. Other British coins also feature his work.

Linn’s Introduction to the Stamps of Great Britain by David Alderfer and Rosenblum provides an excellent introduction to the Machin definitive stamps. The authors explain: “Arnold Machin, sculptor at the Royal College of Art, modeled a plaster cast of the profile of the queen.” The cast is shown in the book.

In its obituary for Arnold Machin, the New York Times stated, “The longevity of the Machins, Sir Arnold once speculated, was due to the fact that the profile portrait was derived not from a photograph of the Queen but from a photograph of a delicately lit sculpture, whose subtle highlights and shadows produce a timeless cameo effect.

“Achieving that subtlety was not easy. As Sir Arnold recalled, when studio lighting failed to produce the desired effect, the sculpture was taken outside on a foggy day and photographed in a parking lot.”

Though the design is simple, the Machin definitives are a complicated, fascinating series for stamp collectors. The Machins have undergone numerous changes through the years, and offer many challenges for the collector who is not faint of heart.

Rosenblum has proven himself up to the challenge, and we are pleased to present his tribute to this stamp series that is still going strong after a half century.