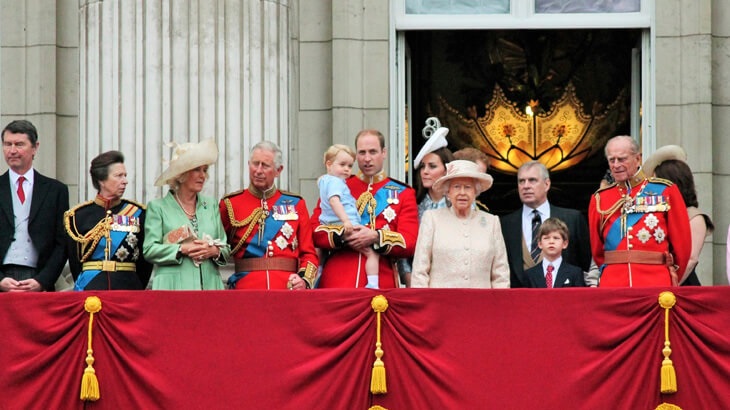 To celebrate the Queen of England's 90th birthday, the Royal Mail has united four generations of Windsor family, including young Prince George, for a commemorative stamp set. (Getty Image)

The Royal Family continues to expand its presence on stamps, as Prince George joins his father, grandfather and great grandmother, Her Majesty the Queen, on Royal Mail’s next royal set.

To honor the 90th birthday of Queen Elizabeth II, ABC is reporting that a souvenir sheet featuring four generations of the Windsor family is the centerpiece for the new stamps, which went on sale on Thursday.

“Six of 10 planned stamps will depict Her Majesty’s life and work. The set includes the queen with her father, attending the state opening of Parliament, with her then-young children Princess Anne and Prince Charles, visiting New Zealand in 1977 during her Golden Jubilee, with her husband, Prince Philip, in 1957, and with Nelson Mandela in 1996.”

Earlier in the week, the queen made a special visit to Royal Mail to commemorate its 500th anniversary.

Henry Gitner and Rick Miller have noticed a volatile marketplace: various sets of stamps from Qatar.

Read about why the market for Qatari stamps has been in flux.

The 13th installment in the upcoming National Parks stamp set will depict Mount Rainier National Park, just outside of Seattle.

This stamp has an image merged from 200 separate photographs – it is truly unique.

1. Siegel auctions May 4-6 to offer independent mails, postal history of United States, the Confederacy
2. Stamps document going for the gold in Australia in the 1850s: Stamps Down Under
3. U.N. International Dance Day stamps show dances from around the world