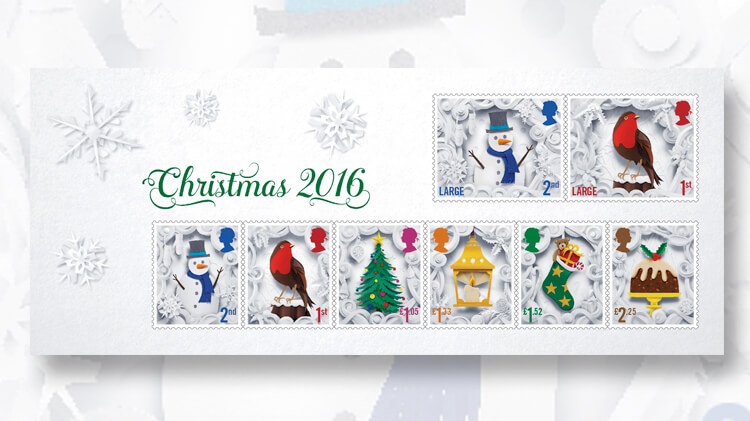 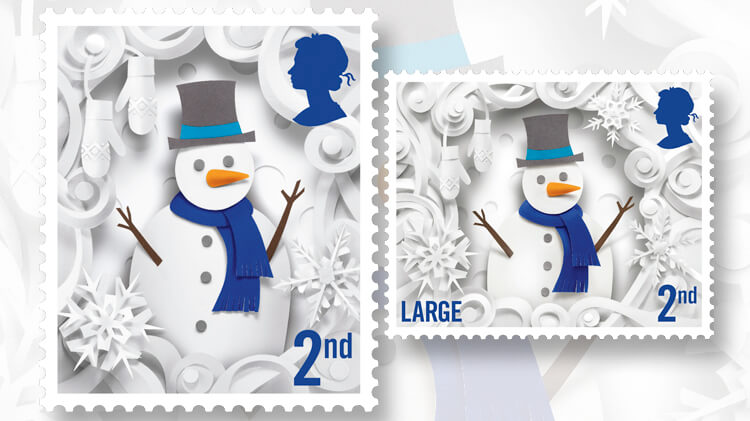 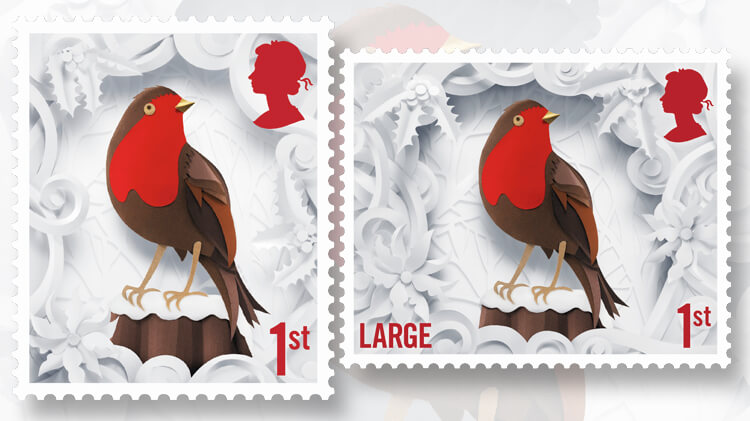 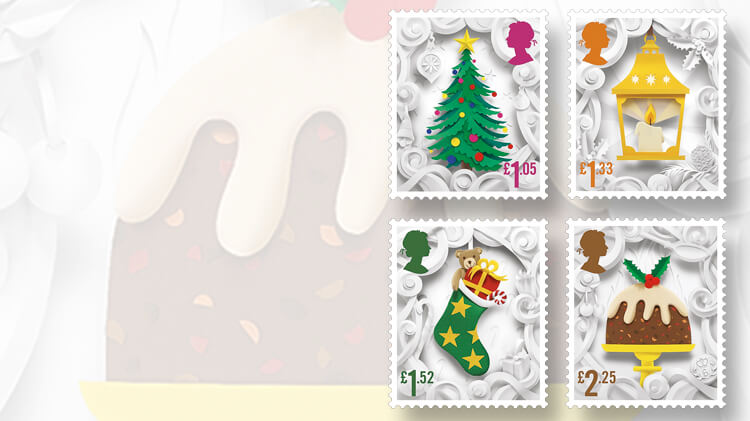 The four denominated stamps in Great Britain’s Christmas issue represent the holiday traditions of decorating a tree, lighting a lantern, hanging up a stocking, and eating Christmas pudding.
Previous
Next

The paper-cut sculptures were crafted by Helen Musselwhite of Manchester, England.

According to a report in the Manchester Evening News, Musselwhite spent 18 months working on this project for Royal Mail.

In a press release from Royal Mail, Musselwhite said: “Illustrating the Royal Mail Christmas 2016 stamps has been one of the most important and favourite jobs of my career to date. I’m immensely proud that my work will be winging its way across the world sending Season’s Greetings far and wide from the UK.”

The two first-class stamps depict a robin. Royal Mail calls it a “robin redbreast,” adding that this bird “is synonymous with Royal Mail at Christmas. Its appearance on Christmas cards inspired by the red coats worn by postmen in Victorian times when postmen were known as ‘red breasts.’ ”

The current first-class rate is 64 pence for standard-size mail, and 96p for large letters.

Pictured on the two second-class stamps is a snowman wearing a top hat and a blue woolen scarf. He has a carrot nose and sticks for his arms. Shown in the paper-cut frame around the snowman are a pair of mittens and snowflakes.

The current second-class rates are 55p for standard-size letters and 75p for large letters.

The £1.05 stamp, which pays the rate for mail to Europe up to 20 grams and to international countries up to 10 grams, shows a decorated Christmas tree with a star on top and additional ornaments and a bell in the paper-cut frame.

Illustrated on the £1.33 stamp is a lantern with a candle inside of it, and cut-out stars at the top. Also included in this design are berries, holly, and a pine cone. This denomination meets the rate for international mail up to 20 grams.

The stocking pictured on the £1.52 stamp is filled with a teddy bear, a wrapped package, and a candy cane. This stamp is for use on mail to Europe weighing up to 100 grams.

The £2.25 high denomination of the set matches the international rate for letters weighing up to 100 grams. The design features a Christmas pudding, also sometimes called a plum pudding and referred to as “figgy pudding” in the carol We Wish You a Merry Christmas. Pictured in the lower left of the design is a 6p coin, representing the surprise hidden in the pudding.

On a web page titled “Christmas traditions and coins,” the Royal Mint explains this tradition: “Stir-up-Sunday, the next before Advent, is the traditional day to make the Christmas pudding. Traditionally, a silver sixpence was stirred in to the mix, to bring the finder wealth and good luck in the year to come. In the past it was usual for every member of the household to give the pudding a stir and make a wish. Some families have used the same Christmas sixpence for as long as they can remember!”

De La Rue Security Print printed the self-adhesive stamps by gravure in sheets of 50 (sold in panes of 25 at most postal outlets).

A souvenir sheet includes all eight stamps with moisture-activated gum. The sheet is 179mm by 74mm.

The nondenominated first-class and second-class stamps for standard-size mail also were issued in separate booklets of 12, printed in gravure by International Security Printers (previously called Walsall); and in sheets of 16 (eight of each design) and sheets of 20 (10 of each design) with se-tenant labels.

The sheet of 16 shows a snowy rural landscape in the background, including a public mailbox.

The presentation pack also celebrates this anniversary. In addition to a mint set of stamps, this pack includes text by John Holman, stamp collector and former editor of the British Philatelic Bulletin.

Other products to be offered in conjunction with the Christmas stamps include first-day covers, and a set of nine postcards reproducing the designs of the eight stamps and the souvenir sheet.