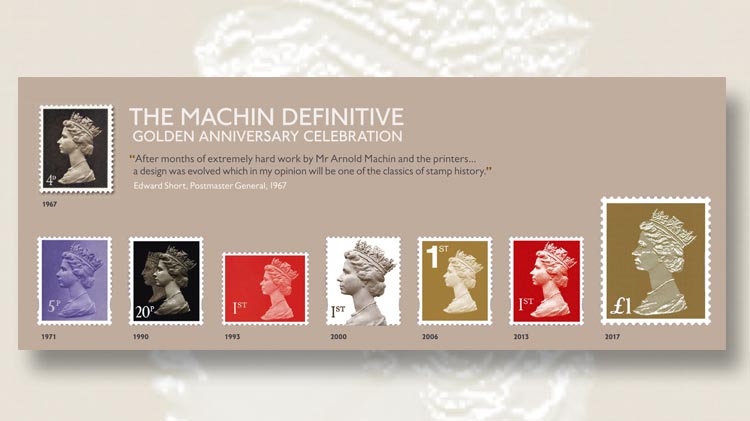 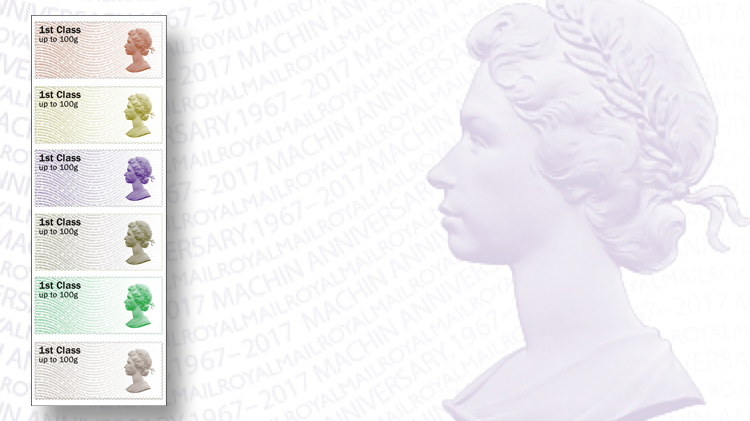 For the Machins’ golden anniversary, Royal Mail changed the design of its “post & go” labels to show the portrait of the queen Arnold Machin created for use on commemoratives.

Royal Mail issued two souvenir sheets June 5, the 50th anniversary of the release of the first Machin definitives June 5, 1967. This sheet, “50 Years of a Design Icon,” displays some of Arnold Machin’s work in creating the portrait of the queen for the st
Previous
Next

Definitive stamps featuring Arnold Machin’s sculpted portrait of Queen Elizabeth II were introduced June 5, 1967. In the last 50 years, this portrait of the queen has appeared on an estimated 220 billion stamps, printed in more than 130 colors.

Royal Mail said, “There have been more than 550 basic varieties; the differences being mainly in value, colour, shape, security features, phosphor bands or coating, methods of printing and printers.”

One of Royal Mail’s two new souvenir sheets honoring the Machin’s anniversary is titled “50 Years of a Design Icon.” This sheet contains six nondenominated first-class stamps depicting sketches, essays, and other preparatory work from 1966 used in creating the Machin designs.

An explanation of what the item is appears in the selvage above each stamp. For example, the stamp in the upper left shows “One of the many preliminary sketches by Arnold Machin based on the Penny Black,” from January 1966.

Each stamp in this souvenir sheet also includes an embossed image of the queen.

The second souvenir sheet is called the “Golden Anniversary Celebration.” Below this title is the following quote from Edward Short, Great Britain’s postmaster general in 1967: “After months of extremely hard work by Mr. Arnold Machin and the printers … a design was evolved which in my opinion will be one of the classics of stamp history.”

Pictured on the top part of the sheet is one of the first Machin stamps, the 4-penny brown black (Scott MH6).

The bottom half of the sheet includes seven stamps showing versions of the Machin from 1971 to 2017. The first two stamps are denominated: a 5p stamp issued for decimilization in 1967; and a 1990 double-head 20p for the 150th anniversary of the Penny Black, the world’s first postage stamp issued by Britain in 1840.

The four first-class stamps in this souvenir sheet reproduce the designs of the first Machin self-adhesive of 1993, a new setting of the Machin portrait on a white background in 2000 to commemorate the millennium, a pricing-in-proportion stamp of 2006, and a 2013 red Machin with iridescent overprint.

Royal Mail describes the final stamp, “This £1 stamp, issued on 5 June 2017, is based on the high-value range of 1969 and is printed using gold foil.”

This stamp also is available in a pane of four in the prestige booklet that celebrates the Machin anniversary. The booklet contains text and illustrations in addition to stamps. The booklet sells for £15.14, according to Royal Mail.

The prestige booklet includes four additional stamp panes. Two of these feature the stamps from the 50 Years of a Design Icon souvenir sheet.

The third pane contains a second-class stamp with an iridescent overprint and eight other Machins that Royal Mail describes as “make-up values.” The denominations are 1p, 2p, 5p, 10p, 20p, 50p, and £1.

The fourth pane represents stamps from the Golden Anniversary Celebration souvenir sheet. However, this pane of nine does not include the 5p stamp or the £1 gold-foil stamp, but does include a 1989 first-class black nondenominated definitive and two examples of the 20p double-head stamp of 1990.

A retail booklet contains six red first-class Machin definitives and shows a photograph of Arnold Machin at work, with the quote from Postmaster General Short below it.

Royal Mail also has revised the design of its post & go labels for the golden anniversary celebration of the Machins, replacing the definitive version of Machin’s silhouette of the queen with the portrait that appears on Britain’s commemorative stamps.

The Royal Mail Group explains the difference between the two in an online article about portraits of the queen on stamps:
“Machin’s head was intended for definitive stamps, standing alone apart from the value. For commemorative and special stamps a smaller version was required. Machin created a new, simplified plaster cast, without the diadem but with a laurel wreath and ribbons in the hair. This could be used as a detailed drawing or as a simple, solid silhouette.”

The new post & go labels show the full-relief portrait rather than the silhouette normally used. The background text on the labels reads, “Machin Anniversary 1967-2017.”

International Security Printers printed these labels by gravure. They measure 56 millimeters by 25mm. The same firm also printed the souvenir sheets and prestige booklet. The gravure process was used for all except the booklet pane of the £1 stamp, which was printed by lithography and gold foil.

Atelier Works designed the stamps in the souvenir sheets and booklets, using images from different sources, including the Postal Museum and the Machin Arts Foundation. Godfrey Design created the prestige booklet.

Among the related products from Royal Mail are two press sheets, first-day covers, a presentation pack, and postcards reproducing the designs of the six new stamps and the two souvenir sheets.