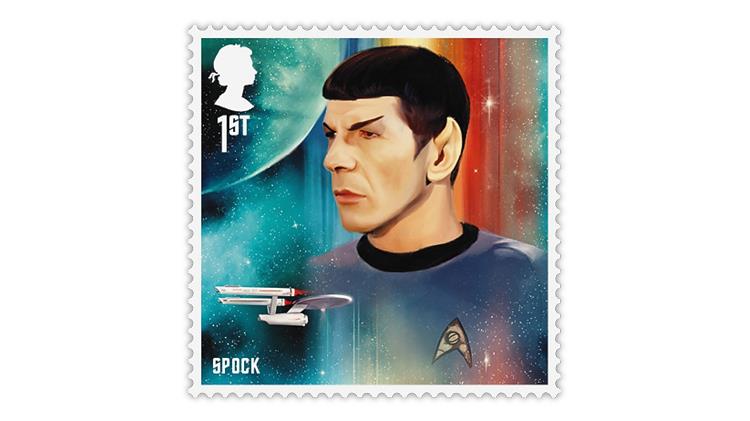 The popular character of Spock from the original Star Trek television series is featured on one of 12 character stamps in a new set from Royal Mail of Great Britain. A six-stamp souvenir sheet is also part of the set. 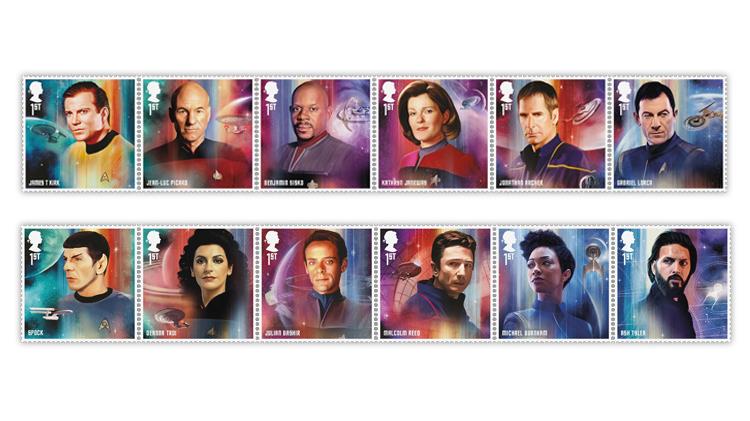 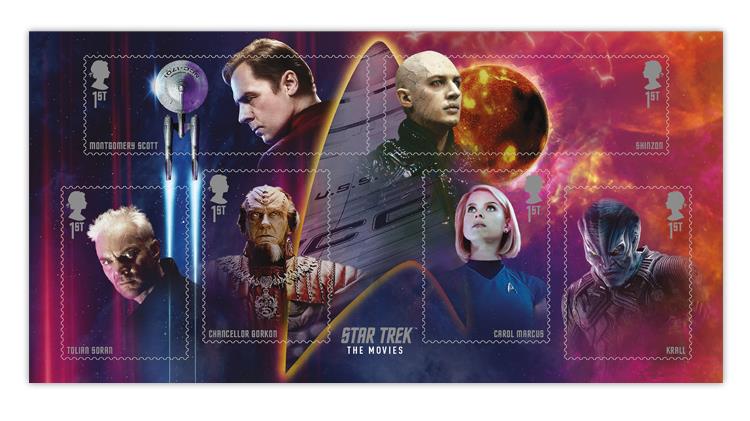 The characters shown on the six-stamp souvenir sheet all appeared in various Star Trek feature films over the past four decades. These six characters were all portrayed on screen by British actors.
Previous
Next

Great Britain’s postal authority, Royal Mail, will pay tribute to the expanded Star Trek television and film franchise with a new set of 12 stamps plus a souvenir sheet of six.

The individual stamps all highlight one character from the Star Trek universe created by Gene Roddenberry, beginning with the original Star Trek television series that debuted on NBC in the United States in 1966, and continuing through Star Trek Discovery, which launched as a series in 2017 on the CBS All Access streaming service.

“The long-running space-opera has so far produced more than 780 TV episodes and 13 movies,” according to Royal Mail.

Though the Star Trek franchise is primarily American, Royal Mail points out that six of the 12 actors seen on the individual stamps are British, as are all six of the actors shown in their roles on the souvenir sheet.

The 12 individual stamps depict the captains from the first six live-action television series, and well-known crew members from five of those series.

Each stamp is square and has a colorful background with “reflective details,” according to Royal Mail, including an image of the starship associated with the character. Inscribed in dropout white are the character’s name at lower left, and the queen’s right-facing profile above “1st” at upper left.

The illustrations on the 12 character stamps were created by London-based illustrator Freya Betts.

The individual stamps and the six stamps on the souvenir sheet are all nondenominated stamps for first-class mail (currently 76 pence).

Depicted first among the individual stamps is Capt. James T. Kirk of the starship Enterprise from the original Star Trek series. Kirk was portrayed by Canadian actor William Shatner during the three-year run of the original series, and again in several feature films between 1979 and 1994. He also directed the 1989 movie Star Trek V: The Final Frontier.

The first stamp among the remaining six issues features Spock as portrayed by actor Leonard Nimoy in the original series and in eight feature films from 1979 to 2013. Nimoy also directed the 1984 movie Star Trek III: The Search for Spock, and the 1986 film Star Trek IV: The Voyage Home.

Stewart, Isaacs, Sirtis, Siddig, Keating and Latif are the six British actors whose characters are portrayed on these 12 stamps.

The six stamps on the souvenir sheet share some design similarities with the other 12, but they are part of an overall illustration and vary in shape. Two stamps are elongated horizontal rectangles, and the remaining four are boxy vertical rectangles.

The sheet is inscribed “Star Trek The Movies” near the bottom center, and the characters depicted all appeared in one or more of the 13 Star Trek films that were released between 1979 and 2016.

The first horizontal stamp at top left shows Chief Engineer Montgomery Scott as portrayed by Simon Pegg in the 2009 franchise reboot film, Star Trek, and in its two sequels, Star Trek Into Darkness (2013) and Star Trek Beyond (2016). Pegg also co-wrote the latter movie.

The first of the vertical stamps in the bottom row shows Tolian Soran, the antagonist from Start Trek Generations, a 1994 film that included cast members from both the original series and Star Trek: The Next Generation. Actor Malcolm McDowell played the renegade scientist.

The stamps are being offered in a broad range of formats, including a small pane of 12 for the individual character stamps and the six-stamp souvenir sheet, which come packaged together in a Royal Mail presentation pack, and which are also sold individually.

Inside the prestige booklet, “you’ll find images from key episodes and an overview of every Star Trek TV series and movie,” according to Royal Mail.

Individual panes of 10 bring together one, two or three character stamps from a single series.

A booklet of six first-class stamps includes one each of the Kirk and Picard stamps, plus four Machin definitives.

These stamp products and numerous others are described and illustrated on the Royal Mail website.