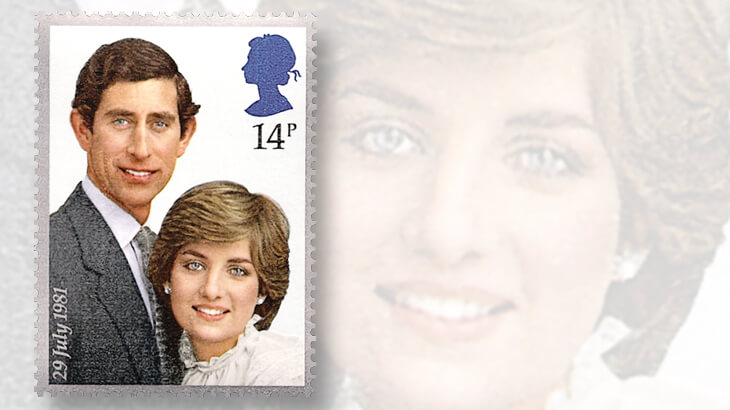 Lord Snowdon took the photograph of Princess Charles and Lady Diana that is featured on Great Britain’s 1981 Royal Wedding issue. The society photographer and former brother-in-law of Queen Elizabeth II passed away Jan. 13.

The former brother-in-law of Queen Elizabeth II and society photographer Lord Snowdon died Jan. 13 at age 86. The designs of several Great Britain postage stamps are based on his photographs, including the 1981 issue for the royal wedding of Prince Charles and Lady Diana Spencer (Scott 950-951).

He also took photographs that are reproduced on two of the stamps in Great Britain’s 1998 memorial issue for Princess Diana (Scott 1791 and 1793); and on one of the stamps in the 2002 issue marking the 50th anniversary of the reign of Queen Elizabeth II (2019).

In addition to photographing the royal family, he was known for his photographs of famous people and celebrities. His photograph of Charlie Chaplin is reproduced on the 29-penny stamp (Scott 1121) in the 1985 set honoring British Film Year, and more recently his photograph of Sue Ryder is shown on a nondenominated first-class stamp in the British Humanitarians set issued March 15, 2016.

He also designed the Snowdon Aviary at the London Zoo, which is featured on a British stamp issued in 2012 as part of the A-Z series (Scott 2972).

Born Antony Armstrong Jones on March 7, 1930, he began his professional photography career in 1952, working for the magazine Tattler. He married Princess Margaret, the sister of Queen Elizabeth, in 1960. The couple divorced in 1978.