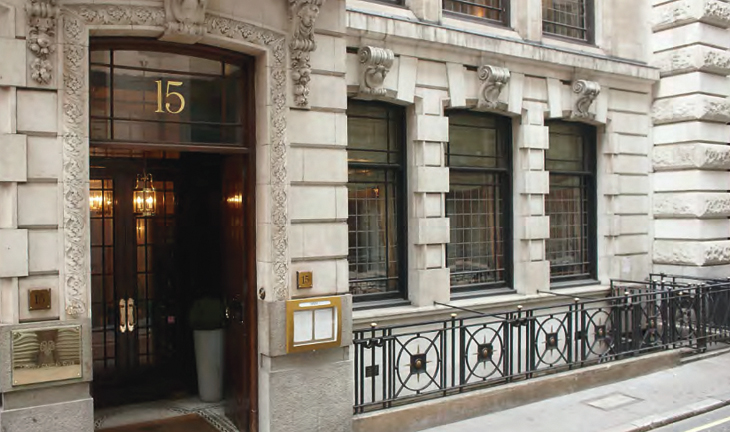 The Royal Philatelic Society London has purchased new premises at 15 Abchurch Lane in the old City of London, and plans to move in by June 2019 following renovation. Photograph courtesy of the London Capital Club.

The Royal Philatelic Society London has purchased new premises within the city and plans to move in by June 2019 after completing renovation.

The new location is at 15 Abchurch Lane, the current site of the London Capital Club, which will be vacating during the summer.

It is centrally situated in the old City of London between the London Bridge to the south and the Threadneedle Street location of the Bank of England to the north.

The building has ample local amenities close by, including hotels, bars and restaurants, and is served well by London’s public transportation system.

Historic sites near the Abchurch Lane location include a pedestrian passageway called Post Office Court, recalling the nearby General Post Office that moved there in 1678 and closed in 1829. A monument plaque for that structure can be found within two minutes’ walk from the new society home.

The RPSL sold its previous headquarters at 41 Devonshire Place in July 2017, thereby generating capital to obtain a new location, which was decided upon after a diligent search and selection process.

Until the move is complete, the society will continue to meet at Devonshire Place, which it now leases at no rental.

That location has housed the society since 1925, but concerns about diminished available space sparked conversations nearly 20 years ago about obtaining a new and larger building.

Along with a meeting room, the society requires facilities for its expert committee, and adequate secure space for its significant philatelic library and the society’s philatelic collections.

The plans also call for the society’s Museum of Philatelic History to be made more visible.

Offices for staff and rooms for research and entertainment also are envisioned for the new site.

Though the Abchurch Lane location was renovated in 1994, additional work needs to be done to make it suitable for the society and its members.

“After negotiation, we secured the premises at £10 million,” reported Chris King, the society’s former president and the current chairman of its development committee.

The purchase price is roughly equivalent to $13.75 million.

In his report revealing the details of the new location, King outlined what he called “magnificent plans” to refurbish the new location, and announced a fundraising campaign, “Tomorrow’s Royal,” to help finance the substantial projects ahead.

“You will hear more about this shortly,” King said. “If you’d like to respond before then, please contact our Hon. Sec., Peter Cockburn (honsec@rpsl.org.uk).

“We stand at the head of the RPSL’s greatest and finest project of the last eighty years.”