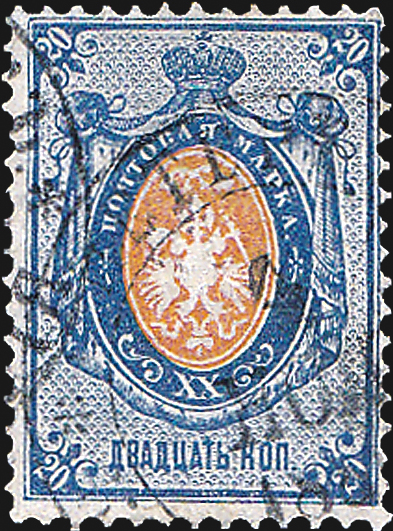 A heretofore unknown Russia rarity was discovered in early March among a batch of items purchased at auction in Europe.

The stamp is an inverted-center variety of the 1875 20-kopeck Coat of Arms stamp showing the cross-shaped “T” in the bottom word, Scott 30a.

An inverted-center example of the 20kop Coat of Arms without the cross-shaped “T” is Scott 30b. This stamp is valued at $85,000 used in the 2015 Scott Standard Postage Stamp Catalogue.

In effect, the new variety is a hybrid of Scott 30a and 30b. At this point, it is the only known example.

Linn’s learned of the startling discovery March 24 from Randy Neil, who handles public relations for Kelleher Auctions of Danbury, Conn.

“An overseas client of the firm recently held a conversation with Laurence Gibson of Kelleher’s,” Neil wrote, “stating that while sorting a recent auction purchase from a European firm comprised of used classic Russian Coat of Arms issues, he discovered something extraordinary among the 20-kopeck value of the 1875 issue.

“While sorting for paper types, he happened upon a variety listed in Scott as the ‘crossed-shaped “T” in bottom word’ variety.

“He was happy to find this item, as he maintained that this variety is far more scarce that its currently listed valuation indicates.

“Then came the real surprise.

“Upon further inspection, he noticed, much to his shock and delight, that the center was inverted.

“Preliminary research by Kelleher showed only three examples of this great Russian Empire stamp [Scott 30b] have ever been recorded.”

Neil said that the stamp was subsequently submitted to Paul Buchsbayew of Cherrystone Auctions, one of the foremost experts on Russia philately.

Buchsbayew completed his analysis of the stamp in mid-March and concluded that the stamp is genuine.

“The results could not have been better. Mr. Buchsbayew noted that the stamp was free from any defects and was genuine,” Neil said.

Neil told Linn’s that Buchs­bayew provided the following summary on the expertizing certificate he issued:

“A great rarity from Imperial Russia, one of only four known (to me) inverted centers of this value; obviously unique error with the plate flaw variety.”

Kelleher intends to sell the new Russia Coat of Arms variety during its May 5-7 public auction in Danbury, Neil said.

On the basis of Buchsbayew’s findings, Scott plans to list the stamp for the first time as No. 30d in Vol. 5 of the 2016 Scott Standard catalog.