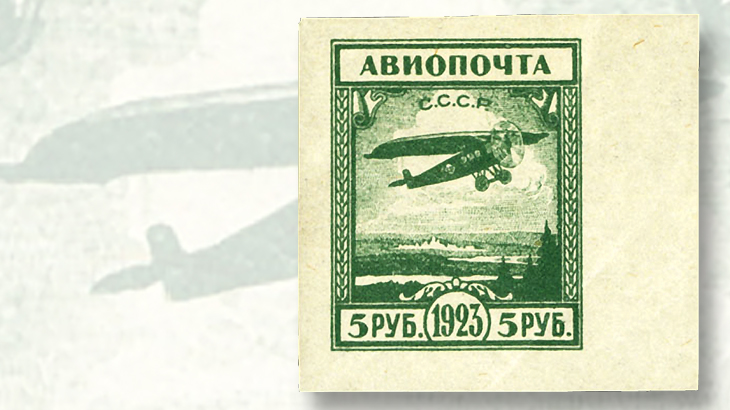 A key Russian airmail variety is the 5-kopeck green with wide “5” from the 1923 Fokker F-111 set. This example of the Scott-listed variety will be auctioned by Cherrystone Philatelic Auctioneers during the firm’s Feb. 28-March 1 sale.

Cherrystone Philatelic Auctioneers of New York City will present its next Rare Stamps and Postal History of the World auction Feb. 28 and March 1.

The auction offers properties of various owners and estates, including part 3 of the Heinz Gappe (H.G.I. Company) inventory of flight and zeppelin covers of the world, plus stamps and covers of the United States, Europe, South America and Asia, including Great Britain and the British Commonwealth, as well as large lots and collections.

The auction offers a significant selection of Russia and associated areas, including early Russian airmails.

A key item for the Russia collector is the 1923 5-kopeck deep green stamp with wide “5” (Scott C4a). Only one sheet of 25 stamps featuring the variety was printed, according to Cherrystone.

The example in the upcoming auction is a right sheet-margin single, lightly hinged with “usual natural gum bends,” according to the catalog description, “incredibly fresh and v.f. [very fine], signed by Goznak, Romeko, also Mikulski, with his 1984 certificate.”

The airmail variety is listed in the 2017 Scott Classic Specialized Catalogue of Stamps and Covers 1840-1940 with a $40,000 value (printed in italics, to indicate the stamp can be difficult to value accurately).

The stamp is listed by Cherrystone with a pre-auction estimate of $25,000.

Another Russian airmail variety on offer is a pair of imperforate blocks of four of the bold 1930 zeppelin issue for the call to complete the Five-Year-Plan in four years.

The stamps were issued as a 40kop dark blue and 80kop carmine. These imperforate varieties (Scott 12b and 13b) are from the first printing, as attested to by the accompanying 1985 Mikulski certificate (the stamps are also signed Goznak and Stolow).

The 40kop block has a sheet margin at right.

The pair of blocks are each hinged at top and never hinged on the bottom pairs; the Cherrystone estimate for the two blocks is $25,000.

Another imperforate variety on offer is a single mint never-hinged 1938 50kop dull violet stamp for the trans-polar flight (Scott 642a) with large margins all around.

The 50kop stamp is the high denomination for the set of three depicting the three aviators and the flight route.

The stamp is accompanied by a 2001 Mandrovski certificate and listed with an estimate of $7,500.

The auction opens with United States stamps and covers, including an unused (without gum) example of the 1847 10¢ black George Washington (Scott 1), an 1867 12¢ black Washington F grill stamp with original gum, and a number of other attractive classics.

An intruiging postal history item in this sale is a 1938 airmail envelope for the record-breaking Howard Hughes flight around the world. The cover is addressed to Lakeland, Fla., and is “one of only a few covers actually signed by Hughes,” Cherrystone states.

It is imprinted with “Howard Hughes” and “New York World’s Fair 1939 Incorporated” in the return address corner, and is franked with two U.S. airmail stamps plus single stamps from Russia and France. The cover includes additional signatures from Hughes’ flight operations manager Al Lodwick and navigator Harry Connor.

Cherrystone has assigned an estimated value of $2,500 for the cover.

Additional information about the auction is available from Cherrystone Auction Galleries, 119 W. 57th St., New York, NY 10019. The auction is taking place at the galleries.

The auction catalog can be viewed online at Cherrystone's website, with online bidding options available.