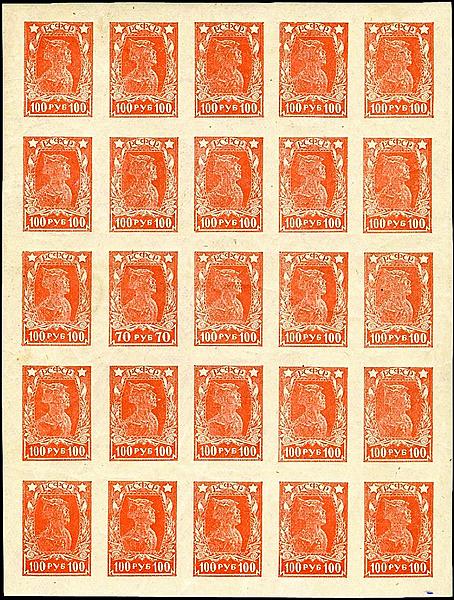 One cliche of this 25-stamp pane mistakenly bears a 70-ruble value instead of the correct 100r. One of just four intact panes known, it sold for $126,500 in the February Cherrystone auction.

After the Czar Nicholas II was overthrown, the provisional government held a contest to design new stamps. One of the participating artists was Rihards Zarins, a Latvian trained in western Europe who had previously designed Russian stamps, including the 1913 Romanov series (Scott 88-104) and the 1914 semipostals depicting the Russian knight Ilya Murometz and other subjects (B5-B8).

Zarins’ design for a new definitive showing the knight was not adopted, although die proofs exist. A combination die proof of this design, together with the 1918 Severing the Chain of Bondage design in an unissued denomination of 15 kopecks, fetched $29,900 (all Cherrystone results include 15 percent buyer’s premium).

The Russian Soviet Federative Socialist Republic existed as a sovereign state for five years, from the Bolshevik revolution in 1917 until the formation of the Soviet Union in 1922.

Russia issued some 200 stamps in that chaotic period, with postage rates changing an astonishing 23 times. Not surprisingly, the Russian post office struggled to keep up, and some stamps became obsolete before they even reached the public. Errors and unique varieties abound, and the Gorski collection contained many of them.

The standout item was a 1922 pane of 25 imperforate 100-ruble Red Army Soldier stamps, in which one cliche was mistakenly replaced with the 70r stamp of the same design (Scott 237a).

Dubbed “one of the greatest rarities in Russian philately,” the item, pictured here, is one of just four full panes known, including one in a St. Petersburg museum. It sold for $126,500.

The next highest realization, at triple its presale estimate, was $83,375 for a handsome proof of Russia’s first airmail stamp, the 45r black and green Fifth Anniversary of the October Revolution stamp overprinted with a red airplane (Scott C1). Endorsed by the postmaster, it is unique.

In 1921, a set of semipostal stamps was prepared to raise money for Volga flood and famine relief. However, because the authorities could not provide paper to print the stamps, employees of the State Printing Office worked in their free time to print them on marginal scraps left over from other stamp printings.