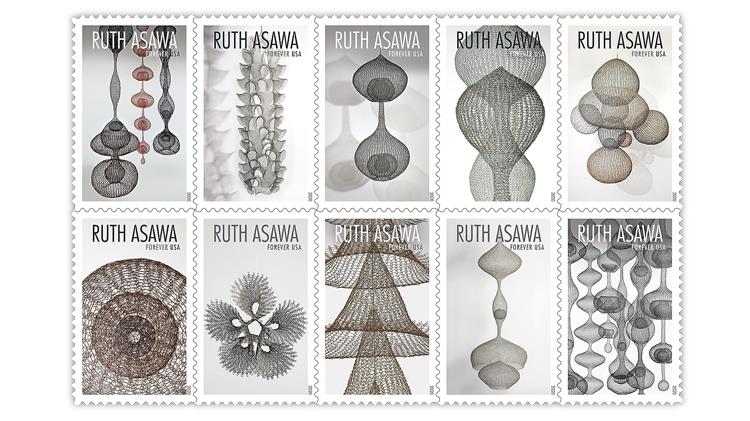 The 10 Ruth Asawa forever stamps show photographs of artwork she created between 1954 and 1996. The stamps will be issued in a pane of 20. 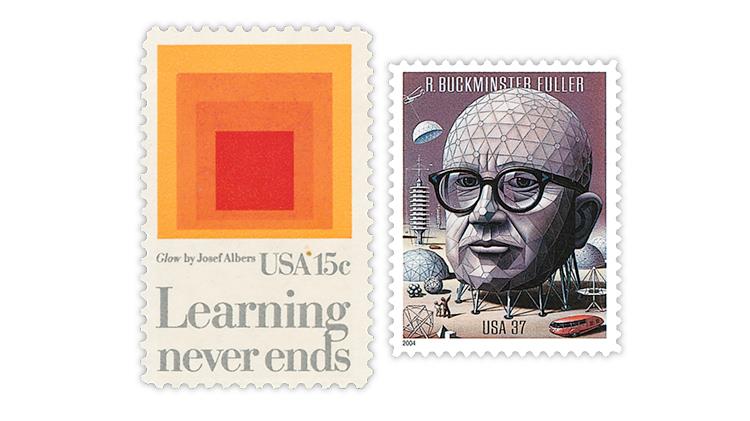 Asawa studied art at Black Mountain College in North Carolina. Among her mentors were painter Josef Albers and architect R. Buckminster Fuller; both have been honored on U.S. stamps. 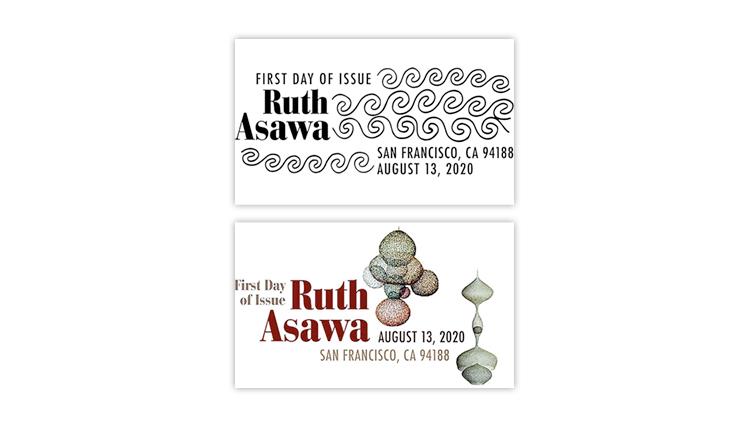 The Postal Service has designed two pictorial first-day cancels for the Ruth Asawa forever stamps, one in black and the other in color.
Previous
Next

Ten new forever stamps from the United States Postal Service celebrate the works of American artist Ruth Asawa (1926-2013). The offset-printed stamps will be issued Aug. 13 in panes of 20.

The vignettes (central designs) of the nondenominated (55¢) stamps show photographs of woven wire sculptures created by Asawa between 1954 and 1996. The images are credited to photographers Dan Bradica and Laurence Cuneo. USPS art director Ethel Kessler designed the stamps.

The 20-stamp pane has decorative selvage to the left of the stamps showing Asawa in a black-and-white photograph taken by Nat Farbman in 1954 for Life magazine.

The Postal Service has suspended in-person first-day ceremonies since March in response to the COVID-19 pandemic. Stamps continue to be issued and sold in local post offices and through the USPS Postal Store online.

Ruth Aiko Asawa was born Jan. 24, 1926, in Norwalk, Calif., the fourth child of seven in the family of Umakichi and Haru Asawa, immigrants from Japan.

The Great Depression brought added hardship to the already struggling Japanese-American farming family, and following the start of World War II, when Asawa was 16 years old, the family was forced to relocate to an internment center in Los Angeles County while Asawa’s father was similarly confined in New Mexico.

During that ordeal she was fortunate to meet and study drawing with Tom Okamoto, Ben Tanaka and Chris Ishii, three Walt Disney Studio animators who were also interned.

While at the school, Asawa also met the man who would become her husband, architect Albert Lanier. They married in 1949, raised six children and remained together until his death in 2008.

Asawa began creating her wire sculptures in 1947, inspired by various elements of nature, according to the Postal Service, and she discovered “in addition to single-layered sculptures, she could also create continuous or intersecting surfaces.” Her sculptures were further influenced by the process of weaving baskets, which she witnessed that same year during a visit to Mexico.

She also completed cast sculpture commissions, many of which are found in San Francisco, where she lived for most of her adult life.

The 1968 Andrea’s Fountain sculpture in San Francisco’s Ghiradelli Square was her first public commission and remains a beloved fixture there more than 50 years later.

Asawa was also a relentless advocate for arts education and co-founded the Alvarado School Arts Workshop, which brings parents and students together with professional artists in public schools, according to the Ruth Asawa website.

“At about the same time, Asawa became a member of the San Francisco Arts commission and began lobbying politicians and charitable foundations to support arts programs that would benefit young children and average San Franciscans,” the website reports.

She was also involved in founding the San Francisco’s public arts high school in 1982. The school was renamed Ruth Asawa San Francisco School of the Arts in 2010.

The Postal Service provided the following descriptions of the artwork showcased in each of the new Ruth Asawa forever stamps, viewing left to right beginning with the first stamp at upper left in the illustration of the 10 stamps. Note that the upper left stamp and the lower right stamp each show multiple sculptures.

Untitled (S.042, Hanging Three-Lobed Continuous Form, with a Sphere in the Second Lobe, and an Open Sphere Suspended from the Bottom), 1954;

Two pictorial first-day cancels are available to collectors, one in black and the other in color. Each postmark shows the artist’s name and a representation of her artwork.