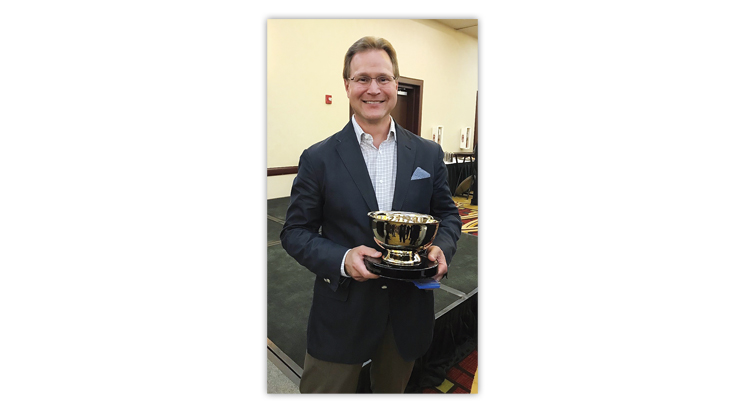 Daniel J. Ryterband’s exhibit “A Country Divided: Effects of the American Civil War on the Mails” won the top exhibit prize in the Champion of Champions competition at the 2021 Great American Stamp Show in Rosemont, Ill.

The prestigious award recognizes Ryterband’s “A Country Divided: Effects of the American Civil War on the Mails” as the top national exhibit of the past year.

This is Ryterband’s first Champion of Champions award. He previously won the grand award at the Stockholmia 2019 international exhibition with this exhibit.

Ryterband’s exhibit was one of 22 qualifying exhibits in the Champion of Champions competition. Each exhibit qualified by claiming a grand award at an APS-sponsored national stamp show during the past exhibiting cycle, which ran from July 2019 through June 2021. This was a slightly longer period of time than usual because of show cancellations due to the COVID-19 pandemic.

All of the exhibits were on display at the show and entered into a head-to-head competition.

Ryterband’s exhibit qualified after winning the grand award at the 2019 Civil War Postal Exhibition and Symposium in Bellefonte, Pa., a special show that was part of the World Series of Philately in 2019.

He received his Champion of Champions award at the Great American Stamp Show’s annual celebration banquet on Aug. 14.

Ryterband’s exhibit is arranged in more than 20 sections that are color coded to indicate Union or Confederate representation. Some of the topics covered include: the politics of 1860, disruption of mail, Confederate States of America provisional postage, wartime adversity, Confederate colleges, southern railroads, special routes, prisoner of war mail, and the end of the Civil War.

The Civil War Philatelic Society has a copy of Ryterband’s exhibit posted on its website.

Among the many other top exhibiting awards at the show were the 2021 youth Champion of Champions award to Adhyatman Agarwala for “Ecuadorian Slogan-Based Covers Related to the Ecuador-Peru Border Conflict of 1941”; the open competition grand award to Michael T. Mahler for “Rebel Documents, Yankee Stamps: How the Union Collected its Stamp Taxes in the Confederacy”; the single-frame grand award to Louis P. Pataki for “World War I Comes to the German Mail in Shantung, China”; and the literature grand award to Michael Mahler for his book Stamp Taxes in Nevada, volumes 1-4.

The Stamp Show Most Popular exhibit went to Vince King for “In the Beginning ... Timbromanie, How the Proliferation of Postage Stamps Started a Collecting Revolution.”

King’s exhibit made special use of three-dimensional objects mounted to parts of his multi-frame exhibit.

The American First Day Cover Society also was a co-host, and its Americover multi-frame grand award went to Anthony F. Dewey for “The 3¢ Connecticut Tercentenary Issue of 1935 and its First Days.”

For additional information and to see the complete list of exhibit award winners, visit the APS website.