Saar’s history and limited number of issues make it collectible 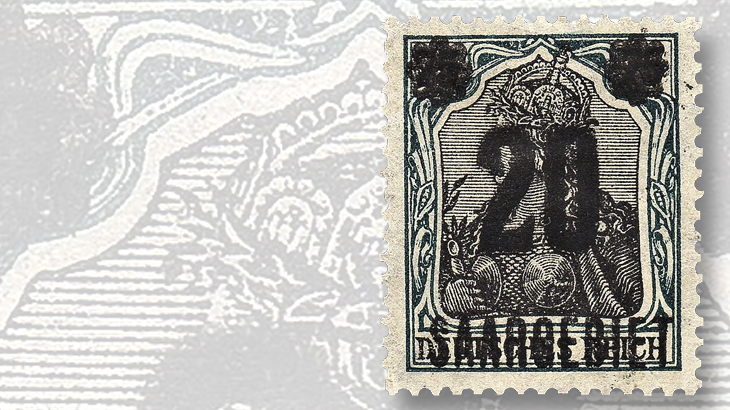 German stamps of 1906-20 were over-printed with a new country name. Old denominations were obliterated and new surcharges added for Saar in 1921. 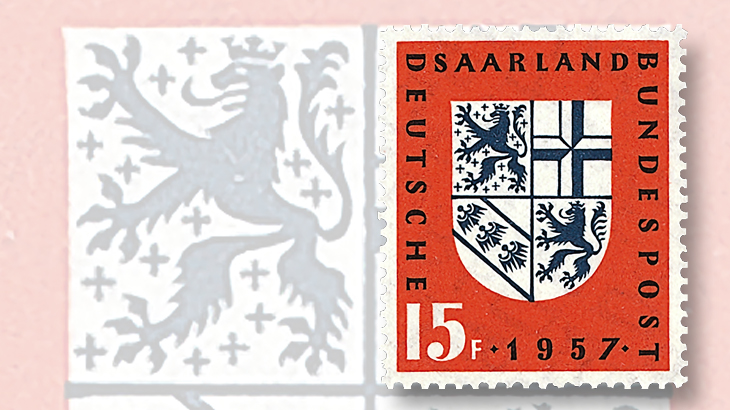 Saar became Saarland, under the administration of West Germany, in 1957. Its first issue as Saarland carries the region’s coat of arms. 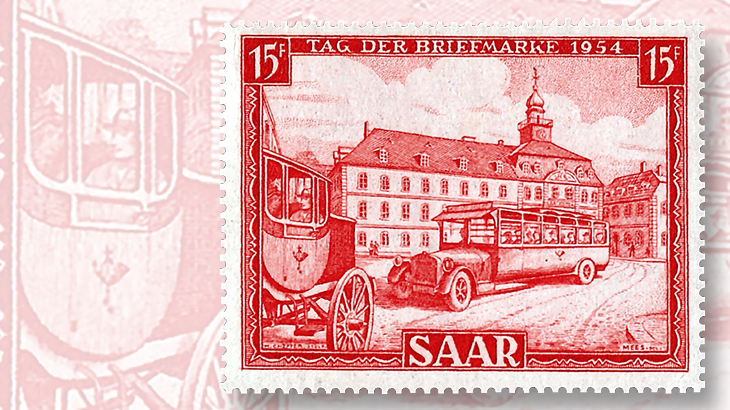 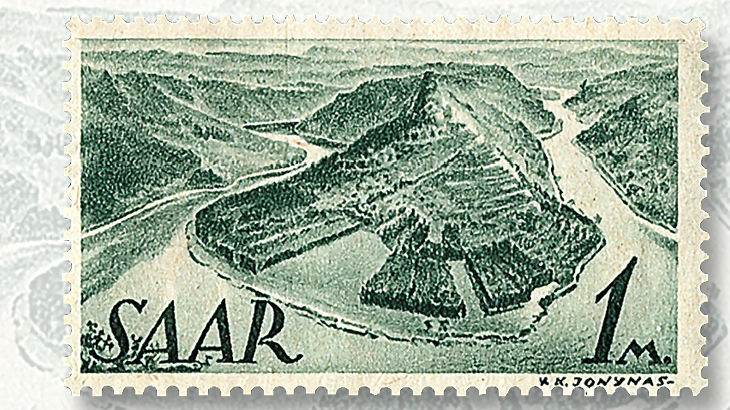 Saar was under French administration in 1947, after Germany’s defeat in World War II. A landscape of the Saar River near Mettlach appears on one of that year’s Saar issues. 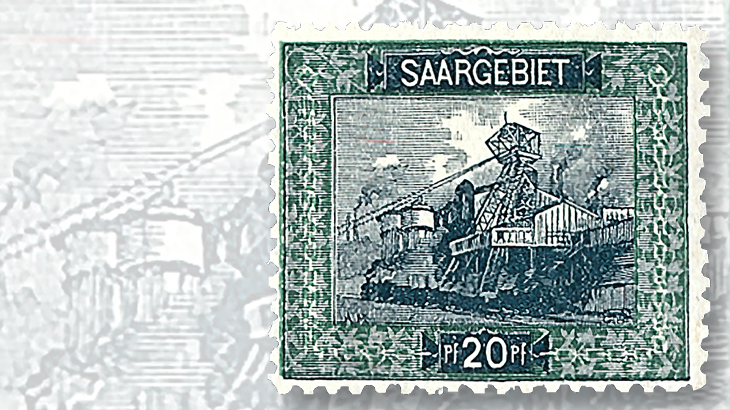 Many Saar stamps from 1921-34 illustrate subjects of labor and industry, such as this 1921 stamp showing the entrance to a mine at Reden. 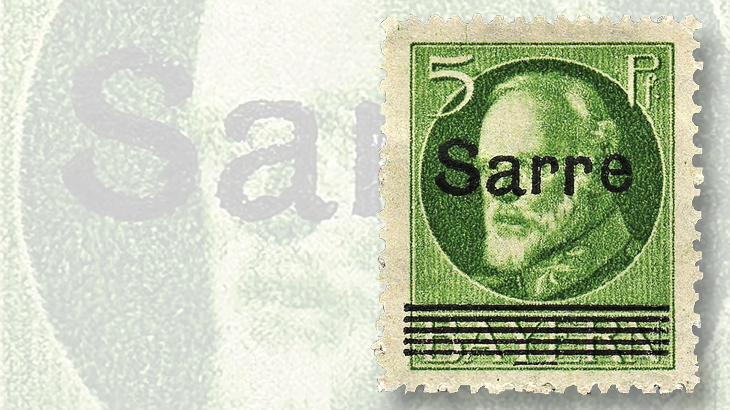 Bavarian stamps of 1914-16 were overprinted “Sarre” with “Bayern” obliterated to make Saar’s second stamp issues, in 1920. 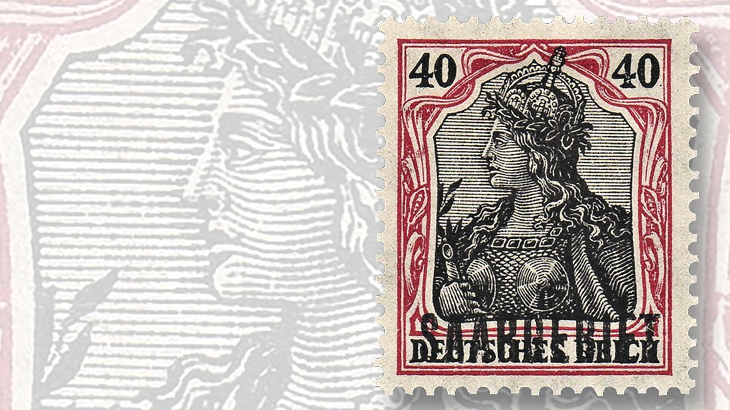 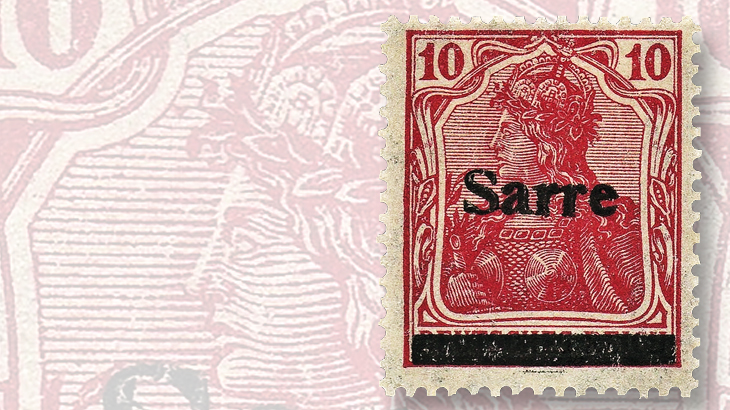 The Saar region’s first issues, in 1920, used German stamps of 1906-19 overprinted “Sarre” and with “Deutsches Reich” blacked out.
Previous
Next

Have you ever completely finished a collection of any country’s stamps?

Certainly it is possible to complete a country collection if you have enough time, enough patience, and, in some cases, enough money. But you can make it easier on yourself by finding an interesting country with attractive stamps that fit your stamp budget.

Saar is a respectable place to start, for several good reasons. For one thing, Saar is a “dead country,” meaning that it no longer issues stamps, so your collection of Saar is self-limited.

Saar produced its own postage stamps beginning in 1920 and ending in 1959, but in March 1935 Saar became a province of the German Third Reich and temporarily stopped issuing stamps, resuming in 1947.

Excluding inverts and varieties, there are very few Saar stamps that catalog more than two-digit figures.

But first, a little history about Saar is necessary.

To make a long and complex history short: The Saar region, an area rich in coal and iron on the French-German border southeast of Luxembourg, had been occupied by France in 1792. After Napoleon’s defeat in 1814, most of the area became part of Prussia. Its name comes from its river Saar (Sarre in French).

On June 28, 1919, the Treaty of Versailles was signed, ending the war between Germany and the Allied Powers. Among several territorial concessions by Germany, the Saar region was to be under international administration for 15 years, after which there would be a plebiscite. The plebiscite (a general vote or referendum) occurred Jan. 13, 1935, and voters overwhelmingly chose to unite with Germany rather than France.

More German stamps were overprinted on March 26, 1920, adding the name “SAARGEBIET” (“Saar area”) at the bottom, a reference to the territory of the Saar Basin governed by the League of Nations under the Treaty of Versailles from 1920 until the plebiscite.

In February 1946, France established the Saar Protectorate, separating it from the post-World War II zones of Allied occupation. Elections held Dec. 15, 1947, established the region with an elected government under French control.

In March 1950, a French agreement with Saar confirmed the region’s autonomy but also its economic union with France. The Saar election of November 1952 resulted in victory for the autonomists and the French. Agreements and formal treaties during the next few years eventually led to Saar joining West Germany Jan. 1, 1957, as Saarland.

A number of Saargebiet stamps were issued between 1921 and 1934, many of them illustrating steelworkers, miners, prominent buildings, railways, and bridges.

Under the post-World War II French administration and the French Protectorate, new stamps for Saar again featured themes of labor and industry, such as miners and steelworkers and farm workers (Scott 153-171 et al).

In January 1957, Saar returned to German administration and instead of “Saar” the stamps say “Saarland.” The first issue, Scott 262, displays the region’s coat of arms.

In 1959, the stamps of Saar (or Saarland) were replaced by those of West Germany.

The majority of Saar stamps have catalog values of less than $5.

So, give Saar’s stamps a try. Their history is interesting, many of the designs are attractive, and you will be surprised at how quickly you can complete these pages in your album.