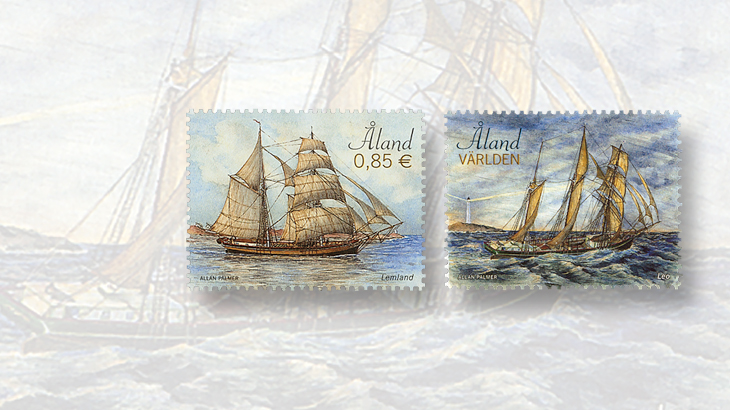 The Sailing Ships set of two was selected as Aland’s most beautiful stamp issue of 2015.

These stamps were issued Feb. 2, 2015, the first set in a planned six-year Sailing Ships of Aland series.

The designs were created by Allan Palmer, an artist and experienced sailor. In an article about the stamps in Posten Aland’s publication for collectors, Alands Posten Frimarken, he said: “The twelve ships chosen for the series clearly distinguish themselves through rigging, epoch and function. We have attempted to eliminate ships that have already been exposed because of their dramatic history or similar causes. The fact of the matter is that, to most sailors, life at sea was simply common everyday work, nothing dramatic at all.”

The 0.85 stamp shows the schooner Lemland. Launched in 1856, this schooner is the oldest of the ships in the series.

A nondenominated international-rate stamp pictures the barquentine Leo, which was built in 1870. This stamp is inscribed “Varlden,” which translates to “world.”

Second place in the stamp popularity poll went to a joint-issue with Switzerland. The two diamond-shaped stamps from Aland picture brooches that are part of folk costumes.