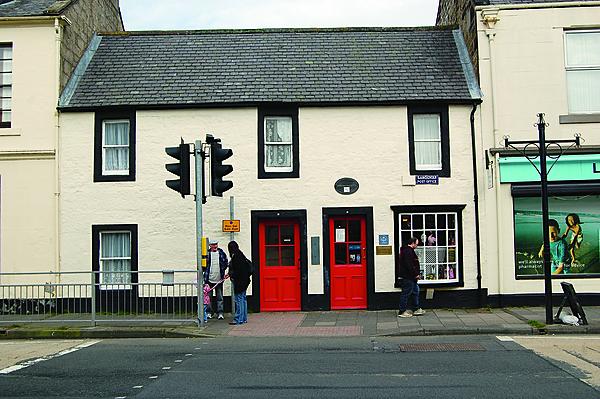 The world’s oldest post office, founded in 1712, is located in Sanquhar, Scotland. In 2015, the post office will have a new postmaster, Manzoor Alam.

The world’s oldest post office, located in Sanquhar, Scotland, will have a new owner in 2015.

He is Manzoor Alam, a “keen philatelist and postal historian,” according to a Dec. 8 press release from the Post Office, the United Kingdom’s retail company of 11,500 branches that provide a variety of services, including selling postage stamps.

Alam is only the 16th postmaster for this post office, which opened more than 300 years ago in 1712.

Penny Murphy, the 15th postmaster, had put the post office up for sale in 2014, as reported in the April 28 issue of Linn’s.

Suzanne Richardson, the Post Office’s regional network manager for Scotland and the North of England, said: “We were looking for someone very special to replace Penny Murphy and take on the post office in Sanquhar. The branch combines a rich postal history with today’s wide range of post office services, and we are delighted to announce that Dr. Alam has purchased the post office and been appointed as the new postmaster.”

In addition to operating the post office, Alam said he plans to create a postal museum in Sanquhar to “promote the rich heritage of the past,” as well as to establish a philatelic society in this town in southern Scotland.

The Sanquhar post office is recognized by the Universal Postal Union, the international governing body for postal administrations, and the Guinness Book of World Records as the oldest post office in the world. Letters posted there receive the handstamp, “The World’s Oldest Post Office.”

Its closest rivals for the title of oldest post office are located in Stockholm, Sweden, and Santiago, Chile. These two offices date back to 1720 and 1772, respectively.

The building that houses the Sanquhar post office began as a staging post for mail carriages owned by Abraham Crichton.