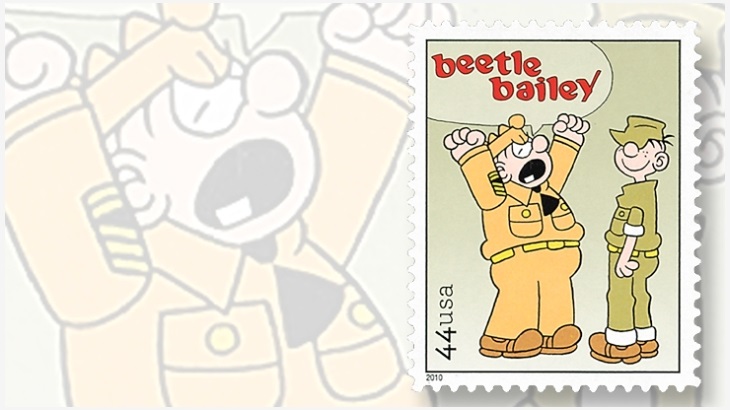 The September cartoon caption contest featured the 44¢ Beetle Bailey stamp from the 2010 Sunday Funnies issue. The winner of the nonphilatelic part of the contest is Michael Schwartz. He played off the age of the Beetle Bailey cartoon, which began in 1950 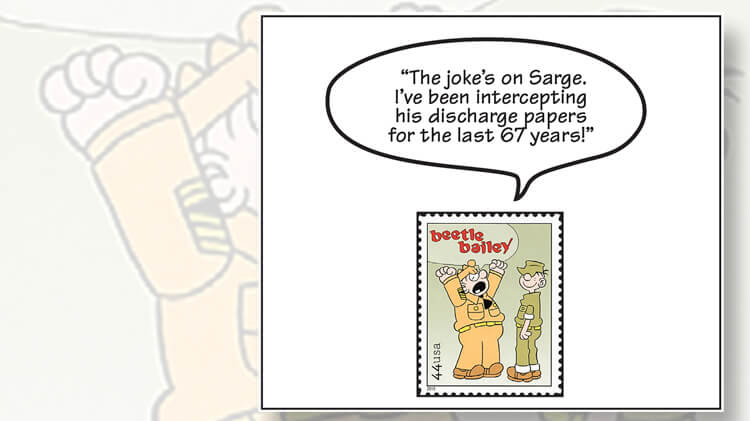 The September cartoon caption contest featured the 44¢ Beetle Bailey stamp from the 2010 Sunday Funnies issue. The winner of the nonphilatelic part of the contest is Michael Schwartz. He played off the age of the Beetle Bailey cartoon, which began in 1950
Previous
Next

One of the popular themes for the September cartoon caption contest featuring the 44¢ Beetle Bailey stamp of 2010 (Scott 4467) was answering the question of what Sarge might be holding in his upraised hands.

Steve Kotler of San Francisco, Calif., had Beetle saying, “I give up. Which hand has the M&Ms?”

Sarge is obviously angry in the stamp design, as he often is in the Beetle Bailey comic strip. Why? This prompted another group of Linn’s readers to suggest an answer.

Entries ranged from the philatelic to political. One approach was sent in by T. Ryan, also from San Francisco: “Listen up Bailey — I asked you what your agenda is today, not what your gender is!”

Another entry highlights something that makes many stamp collectors angry: “All I said was ‘You can’t just buy plate number strips of five from the Caves,’” by John Mueller, sent by email.

The face value of the stamp came in for treatment by some Linn’s readers. One that hit the nail on the head was Beetle observing, “44 must be his waist size!” sent by David D’Hondt of Sun City, Calif.

The sly smile on Beetle’s face comes into sharp focus with the line that wins the nonphilatelic part of the contest. It was submitted by email by Michael Schwartz.

On the philatelic side, Edgar Dunlap takes the honors with “So I used a few of your unused U.S. inverts to mail a letter to my mother … Big deal!”

“I guess Sarge is giving me his 44-cents worth,” from Mildred Barylski of Warrenton, Va.

“What does Ms. Buxley have that I don’t?” sent by David Kiehn of Collierville, Tenn.

“How can Sarge be mad at me? I traded in all those old ugly stamps for new pretty ones that you don’t even have to lick,” from David Schwartz of Commack, N.Y.

“Sarge, you know you can’t give corporal punishment to a private!” from Ramon Rodriguez of Las Vegas, Nev.

“I’ve got a date with Ms. Buxley at the beach this weekend. Even Sarge can’t spoil my mood,” by David Vikan of Dickinson, N.D.

The next cartoon caption contest will be announced in the Nov. 13 Linn’s.

Our readers have spoken, and the July cartoon caption contest winners are ...