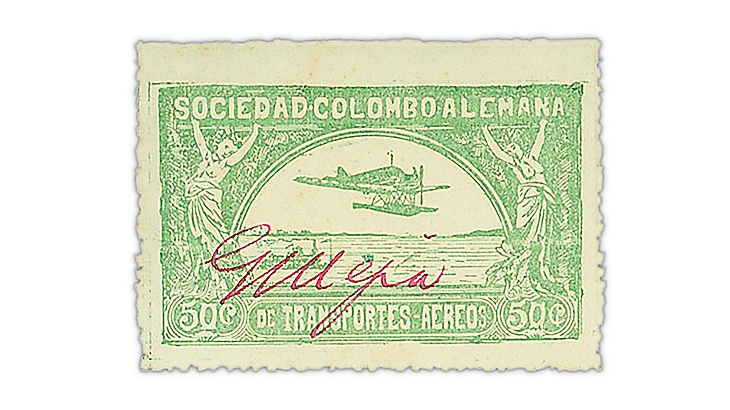 In July 1920, the government of the South American nation of Colombia gave an exclusive contract to the Sociedad Colombo-Alemana de Transportes Aereos (SCADTA) for airmail service.

The agreement gave SCADTA the right to print its own airmail stamps and to retain all profits, and it remained in effect until Dec. 31, 1931, when the Colombian government assumed direct control of airmail service.

The stamps were available at all Colombian consulates, trade missions and agencies maintained by SCADTA. Most stamps were given two-letter overprints to indicate the country in which they were sold. The stamps prepaid airmail service within Colombia once the mail arrived there.

The stamps overprinted “E.U.” for Estados Unidos (Spanish for the United States) are listed with catalog numbers prefixed CLEU in the Scott Specialized Catalogue of United States Stamps and Covers, following the air post semi-official stamps.

While not all United States collectors are interested in SCADTA consular overprints, demand generally exceeds supply.

A good place for collectors to start is the November 1920 Colombia Scott C14 and C16 signed “G Mejia” in red ink (Scott CLEU1-CLEU2). After establishing an agency in New York, SCADTA sold these stamps bearing the signature of the agent, Gonzalo Mejia, to designate their use from the United States.

The stamps are a good buy at full catalog value or perhaps a bit more. Expertization is a good idea.