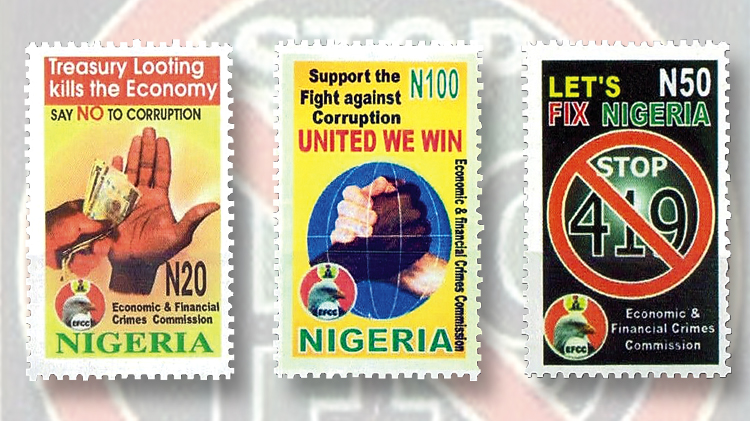 Be aware of the varieties without the printer’s inscription of the 2008 Nigeria Economic and Financial Crimes Commission’s Anti-corruption Campaign stamps (Scott 806-808).

Sub-Saharan Africa has been and remains fertile ground for modern varieties, errors, and unlisted stamps that can bring high dollars from interested collectors.

On April 10, 2008, the West African nation of Nigeria issued a set of three stamps to publicize the Economic and Financial Crimes Commission’s anti-corruption campaign (Scott 806-808).

The 2017 Scott Standard Postage Stamp Catalogue also lists but does not value an imperforate souvenir sheet of three (Scott 808a).

Nigeria is rated one of the most corrupt countries in the world. As of 2012, it was estimated that Nigeria had lost more than $400 billion through government corruption. Bribery, embezzlement, and graft are endemic at all levels of Nigerian government.

The Scott Standard catalog values the set of three at $3 in both mint never-hinged condition and used condition. The stamps in the Scott-listed set have the printer’s inscription below the stamp design.

However, a set without the printer’s inscription recently sold in an online auction for the equivalent of about $105.

The stamps without the printer’s inscription are noted but not valued in the 2012 Stanley Gibbons West Africa Stamp Catalogue.

Some have speculated that the stamps without inscription were an early version produced for servicing official first-day covers.

Nigeria has historically had a problem with producing stamps in time for servicing the covers by the date of issue. We are not suggesting that you buy these stamps at $100 or more, unless of course you need them for your collection.

But be aware that they exist, in case you come across them, unrecognized, at a bargain price.