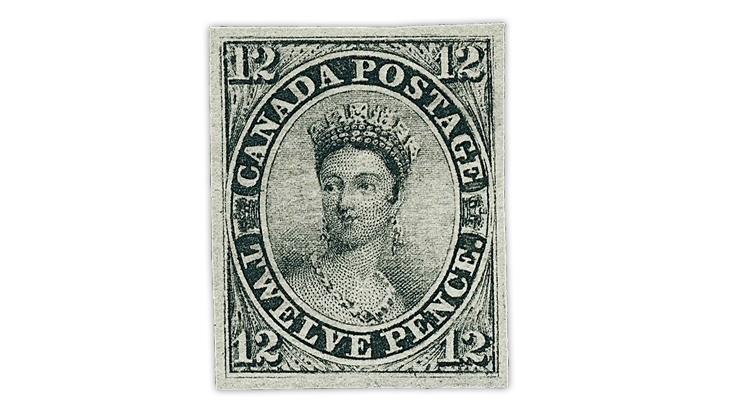 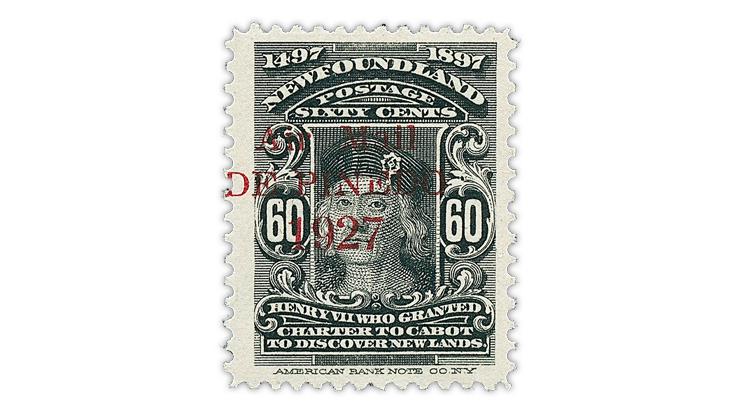 This handsome unused Newfoundland 1927 60¢ airmail stamp celebrating pioneering aviator and Italian aristocrat Francesco de Pinedo will cross the auction block during Siegel’s Oct. 20 Scarsdale sale. According to Siegel, it is believed that only 33 unused
Previous
Next

Select issues of British North America in outstanding condition from the Scarsdale collection will be up for bids during Robert A. Siegel Auction Galleries’ Oct. 20 sale in New York City.

The sale is being held in association with Charles F. Shreve, director of Siegel International. It is the 11th in Siegel’s long-running series of Scarsdale collection auctions that began in April 2006 with United States Columbian and later issues.

“Mint and used examples were collected concurrently, and each stamp was carefully selected … for its exceptional beauty and quality,” Shreve wrote in the introduction to the Siegel catalog for the Oct. 20 sale. “This extraordinary care in selecting a stamp for inclusion in the collection was applied regardless of the value.”

“Adding to the allure of the stamps in the collection is their provenance. The list reads like a Who’s Who of major past collectors and sales: Ferrary, Dale-Lichtenstein, Pratt, Dr. Chang, ‘Crossings’, Gross, Dr. Dauer, ‘Highlands’, to name just a few,” according to Shreve.

One of the world-class rarities of Canada crosses the auction block early in the sale: an unused, original gum example of the 1851 12-penny black Queen Victoria on laid paper (Scott 3).

The elegant engraving of the queen by Alfred Jones is based upon the famed Chalon portrait that appears on the stamps of “Queensland, Tasmania, Bahamas and New Zealand, among other British colonies,” according to Siegel.

Siegel describes the very lightly hinged stamp in the Scarsdale sale as being in sound condition and having large and even margins all around, as well as strong color and a “superbly detailed impression on crisp paper.” Three expertizing certificates accompany the stamp: 1981 Holcombe, 1986 E. Diena and 2009 Philatelic Foundation.

In its description Siegel states that 50,000 12d Queen Victoria stamps were printed in 250 sheets of 200 subjects each. Of this total, just 1,450 stamps were sold; the rest of the stamps were destroyed. In its census, Siegel records 17 original gum singles and four pairs.

The Scott Classic Specialized Catalogue of Stamps and Covers 1840-1940 values an unused 12d Queen Victoria with original gum at $175,000. The value is italicized to indicate a stamp that can be a challenge to value accurately.

Also included in the sale is an exceptional used example of the 12d Queen Victoria with a socked-on-the-nose target ring cancellation that Siegel is offering with an estimate of $75,000 to $100,000.

The overprint, which was applied to the Newfoundland 1897 Henry VII stamp (Scott 74), recognizes the aviation achievement of Italian aristocrat Francesco de Pinedo, who completed a double crossing of the Atlantic Ocean in 1927.

“This stamp was issued for use on mail carried aboard the De Pinedo return flight to Europe,” Siegel explained.

“A total of 300 stamps were overprinted for this special flight. Of those, four were damaged and destroyed. 66 copies were presented to de Pinedo and government officials with between 225-255 used on covers. It is believed that only 33 unused examples are possible,” according to Siegel.

A footnote in the Scott Classic Specialized catalog states that “Francesco de Pinedo, returning from a long voyage through the Americas, landed in Trepassey Bay [in Newfoundland] and accepted four pounds of mail to carry to Italy.”

Included with the De Pinedo airmail stamp in the Siegel auction are 1968 British Philatelic Association and 2009 Philatelic Foundation expertizing certificates.

Also up for bids in the sale are four balance lots of British North America from the Scarsdale holdings that present ample opportunity for a collector to branch into a new area.

“On such a solid foundation one could build a collection of great stature,” Shreve said in the catalog introduction.

A single catalog has been prepared for the Scarsdale British North America sale. Full details of the auction, including a downloadable version of the catalog and online bidding options, are available on the Siegel website.