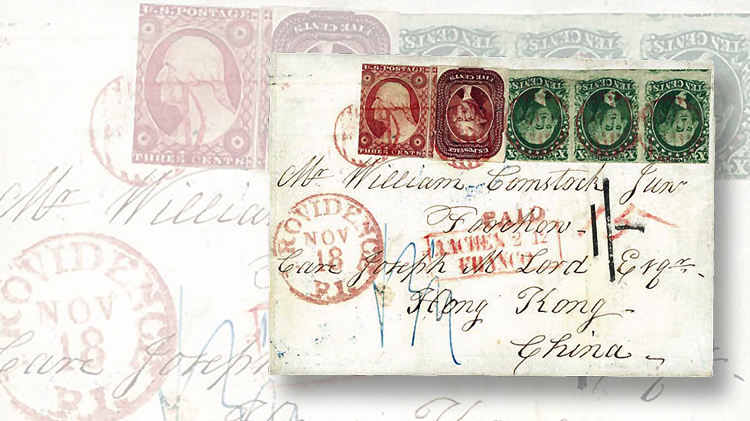 Schuyler J. Rumsey Philatelic Auctions will offer this 1856 cover from Rhode Island to Hong Kong with three-color franking during its Dec. 11-12 auction series.

Every collector knows that philately is steeped in history, and that fact is well documented by the material offered in the upcoming two-day auction series from Schuyler J. Rumsey Philatelic Auctions of San Francisco, Calif.

The Dec. 11-12 auction presents more than 900 lots of Western postal history, another 225 lots of the award-winning Donald Richardson collection of United States postal rates from 1851 to 1863, and some 330 lots from the Donald Green collection of U.S. private die medicine stamps.

Collectors of classic U.S. postal history will find plenty of material to admire in the first two sales.

Many covers in the Western postal history sale are organized by California counties, with others sorted by express companies, markings, other state postmarks, and so on.

Some examples of foreign mail are included, such as an 1860 tan cover endorsed “Overland from N. York to California” that is franked with two horizontal pairs of the 1852 8-bajocchi Roman States stamp (Scott 9) with markings picked up along the way, including Rome, Marseilles and New York. The cover is offered with an estimate of $1,000 to $1,500.

New Zealand collector Donald Richardson has been working on his collection since 1990, turning it into an exhibit of domestic and foreign postal rates from July 1, 1851, to June 30, 1863, and earning international gold awards and national grand awards.

The collection itself is distinctly specialized, but the individual covers with their myriad characteristics will easily enhance many other collections currently being planned or assembled.

Consider, for example, the 1856 folded cover that traveled from Providence, R.I., to Hong Kong with a lovely three-color imperforate franking from the 1851-57 issue: the 3¢ dull red George Washington (Scott 11A), the 5¢ red brown Thomas Jefferson (12), and a strip of three of the 10¢ green Washington type II (14).

The 38¢ franking prepays the Prussian closed mail rate to Hong Kong, and the cover is “the only recorded example of the 5¢ 1856 actually sent at this rare rate and routing,” according to Rumsey, who carefully describes the route and the transit markings on this appealing and historic item.

History is featured in an altogether different format with the many intriguing issues offered in the Green collection of U.S. private die medicine stamps.

The auction offers proofs and essays along with a wide variety of tax stamps with their distinctive designs promoting exotic bitters, balms, syrups, tonics and pills.

The auction provides an impressive range of material and varieties that will appeal to any collector of these handsome stamps.

All three auctions are featured with illustrations on the Schuyler J. Rumsey website. Online bidding is also available.

Additional auction information is available from the same address.