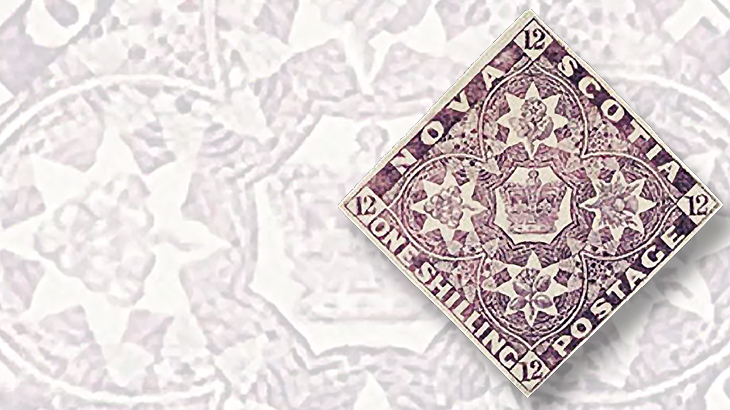 From the Skywalk collection of Nova Scotia offered by Schuyler Rumsey at Sescal 2016 in September, an example of the 1857 issue in reddish purple, sound and with partial watermark, sold for $20,700. 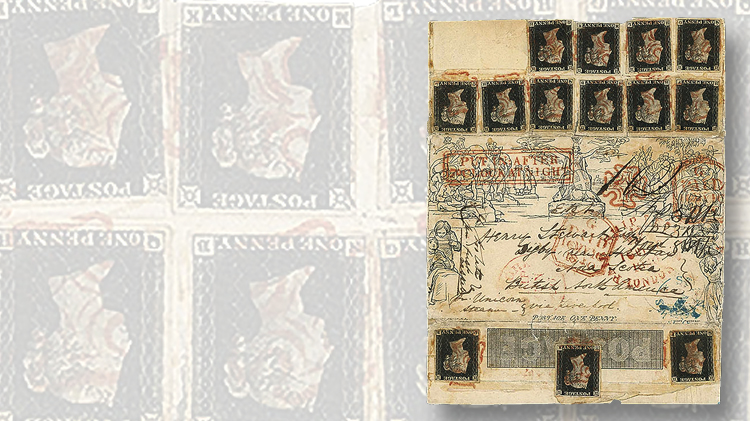 A Mulready stamped envelope with 13 Penny Blacks, mailed from London on May 16, 1840, is the earliest known use of stamps on a letter to North America. Schuyler Rumsey sold the cover at his Sescal 2016 auction for $69,000.
Previous
Next

At the Sescal stamp show in Los Angeles, Schuyler Rumsey offered the Skywalk collection of Nova Scotia as part of a three-day sale, Sept. 23-25.

The collection featured some of the classic rarities and famous postal history items from that British North American colony, which joined Canada in 1867.

Nova Scotia’s first issue, in the 1850s, included a diamond-shaped 1sh stamp depicting the crown of Great Britain and four heraldic flowers of the empire. The stamp was first issued in 1851 in violet, and in 1857 in reddish purple (Scott 6). Just six examples of the latter shade survive unused, and two of them featured in the Skywalk sale.

One, described as completely sound and showing part of the papermaker’s watermark, sold for $20,700, including the 15 percent buyer’s premium added by Rumsey to all lots. The other, with somewhat wider margins but marred by a light corner crease, boasted a pedigree that included famous-name collections such as Ferrary and Lichtenstein. It sold for $10,925.

Besides stamps, the Skywalk collection had an extensive range of postal history telling the story of postal relations between the colony and the rest of North America, as well as across the Atlantic.

One remarkable cover, sent from London in 1840, consists of a Mulready stamped envelope embellished with no fewer than 13 Penny Blacks, Britain’s first postage stamp. Posted on May 16, just 10 days after the first day of issue, it represents the earliest known use of stamps on a letter to North America. Originally, there were 15 stamps on the letter, but two apparently fell off during opening.

The endorsement “per Unicorn steamer via Liverpool” indicated that the sender hoped the letter would be carried on that Cunard steamship’s maiden voyage; the wild assortment of postmarks includes a red boxed “Put in after 7 o’clock at night,” and a manuscript “If too late, per first steamer.” As it happened, the letter missed the Unicorn and went on a different ship to New York.

The postage of 1sh 4d paid twice the ship letter rate within the British empire. In New York, however, the cover was marked “102,” for $1.02, representing the quadruple rate for a letter going over 400 miles, plus the 2¢ ship fee. Further handwritten notations show the calculation of the postage due from the recipient at Digby, near Halifax.

Opened out for display and with some minor flaws and reinforcements, the cover sold for $69,000.

A stunning black-bordered mourning cover sent to India in 1853, franked with a pair of Nova Scotia’s 1s dull violet stamps (Scott 7) and a 6d yellow green (4), all full-margined, was described as “the finest” cover between those two countries. It traveled first to England, then to Malta, Alexandria, Ceylon and finally to its destination in Madras.

A veteran of major collections including that of William H. Gross, who called it one of his favorite items, the cover bested its result from his 2009 sale to bring $103,500.