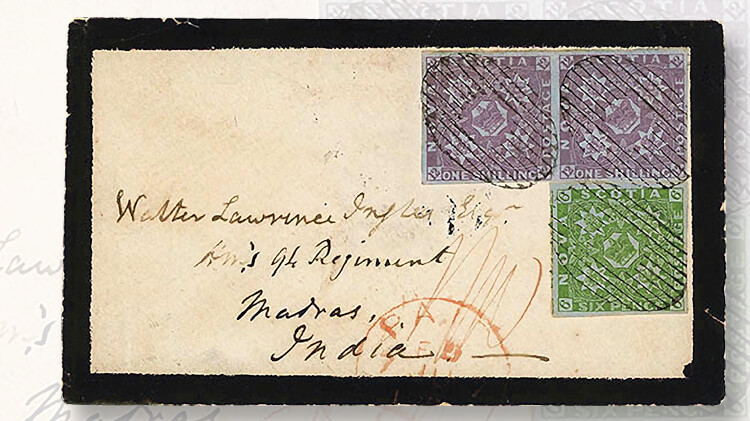 This 1853 cover mailed from Nova Scotia to India will be offered during the Sept. 23-25 Schuyler Rumsey public auction taking place in Los Angeles at the Sescal stamp show and exhibition.

The auction of the Skywalk collection of Nova Scotia stamps and postal history will begin at 10 a.m. Friday with 427 individual lots and collections.

Featured on the auction catalog cover is a mourning cover mailed in 1853 from Sydney, Cape Breton, to Madras, India, and franked with a pair of the 1-shilling dull violet stamp (Scott 7) and a single 6-penny yellow-green (4). The cover was illustrated in the 1971 Anphilex catalog, and is ex-Lichtenstein, Cornwallis, Halifax, Mayer, and Gross. With a 1982 Royal Philatelic Society London certificate, it is estimated at $75,000 to $100,000.

Both of the auction catalogs can be viewed on the Rumsey website, where online bidding options are also available.