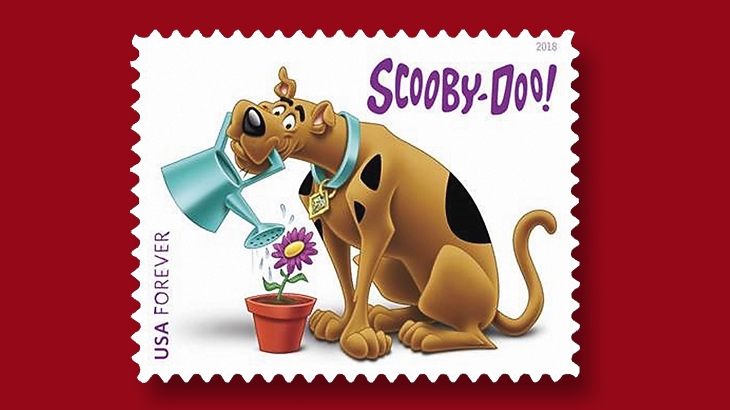 Cartoon star Scooby-Doo waters a blossoming flower on a new United States forever stamp that will be issued July 14. The U.S. Postal Service is joining with the Scooby-Doo Doo Good campaign to encourage environmental awareness. 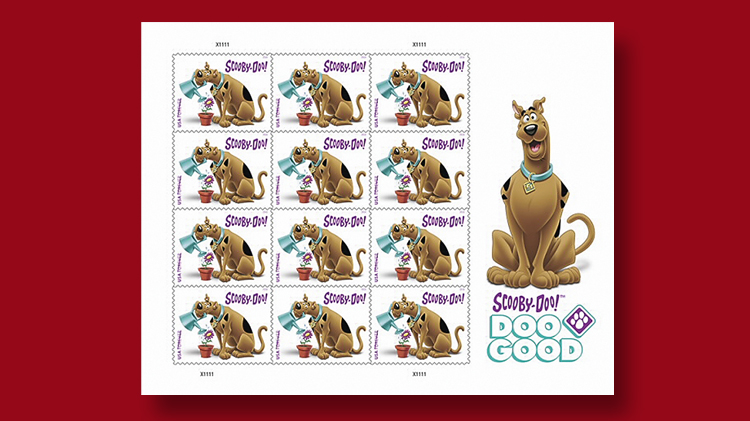 The pane of 12 United States Scooby-Doo commemorative forever stamps. The selvage area has a forward-facing Scooby-Doo with the Scooby-Doo! Doo Good logo below. 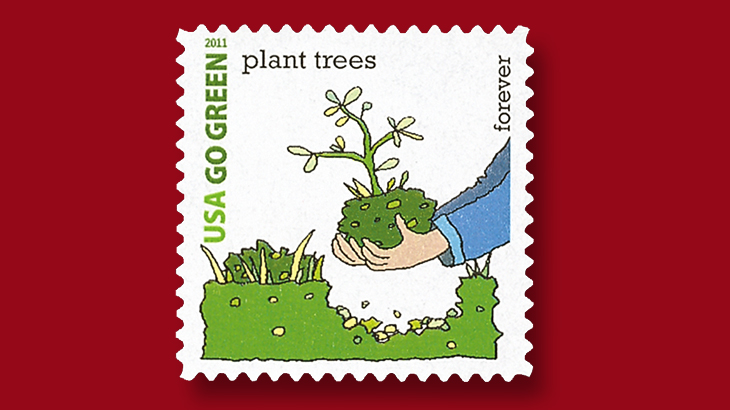 The nondenominated Go Green forever stamp set of 16 was issued as the 2011 Social Awareness stamp subject from the U.S. Postal Service. 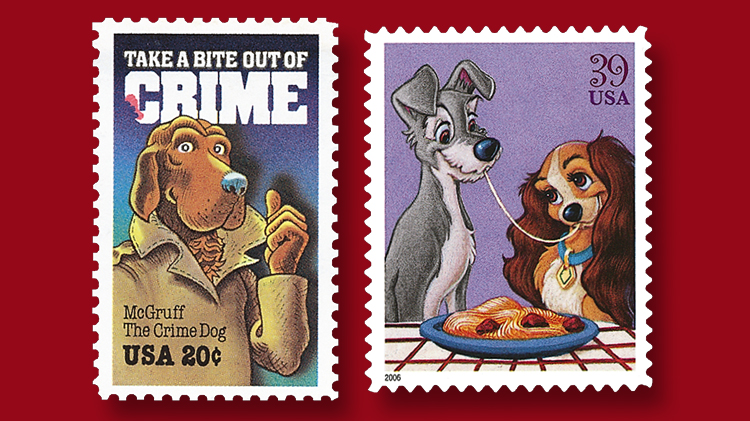 Scooby-Doo isn’t the first cartoon dog to appear on a U.S. stamp — not by a long shot. Among others, McGruff the Crime Dog was featured on a 20¢ stamp in 1984, and Disney’s Lady and the Tramp shared a plate of spaghetti on a 39¢ stamp issued in 2006.
Previous
Next

As part of his new quest, the animated Great Dane is appearing on a new United States postage stamp that will be issued July 14.

The nondenominated (50¢) Scooby-Doo forever stamp will be sold in panes of 12. A first-day ceremony is planned for 10:30 a.m. CDT at the massive Mall of America, 60 E. Broadway, in Bloomington, Minn.

The stamp ceremony is taking place in association with a Scooby-Doo Doo Good event at the mall.

Along with paying postage on cards and letters, the new Scooby-Doo forever stamp serves as an ambassador for the Scooby-Doo Doo Good program, which encourages local action to help the environment through recycling, reducing energy consumption, community clean-ups and more.

Program details can be found at https://doogood.scoobydoo.com.

The Scooby-Doo Doo Good program is an offshoot of Generation On, an enterprise of the youth division of Points of Light, a nonprofit group that traces its beginnings to a theme expressed by President George H.W. Bush in his 1989 inaugural address, reflecting on the work accomplished by community organizations.

Another important partner in this collaboration is Warner Bros. Consumer Products, the home for Scooby-Doo and his crime-fighting pals. The Warner Bros. division worked with USPS art director Greg Breeding to produce the new stamp.

The stamp design shows Scooby tipping a watering can toward a blooming purple and yellow flower in an orange pot, “a simple act symbolizing a component of the ‘Doo Good’ campaign’s effort to provide young people with tools and activities geared toward enriching the environment,” according to the Postal Service.

The campaign will also promote helping the hungry and acting as animal allies, the Postal Service notes.

Preliminary USPS artwork of the Scooby-Doo stamp pane shows the stamps arranged as a block of 12 (three across and four down) with a different larger portrait of Scooby-Doo against a white background in decorative selvage to the right.

Below the character is the name Scooby-Doo printed in purple, with “Doo Good” and a symbol of a paw print within a four-sided diamond shape. That symbol also appears on the Doo Good website.

The theme of nurturing the environment was explored by the Postal Service in 2011 with a set of 16 Go Green forever stamps, the Social Awareness stamp issue for that year (Scott 4524).

The USPS has previously described itself as “a sustainability leader and innovator.”

The character of Scooby-Doo is now nearing 50 but remains popular with kids of all ages. He was developed in 1969 by Hanna-Barbera Productions (a division of Warner Bros. that was absorbed by the larger studio in 2001).

The first animated series starring Scooby-Doo was Scooby-Doo Where Are You?, a breakout hit on the CBS television network.

“The lovable, iconic Great Dane Scooby-Doo has solved mystery after spooky mystery since his 1969 debut,” the Postal Service observed. “With his teenage friends — Fred, Daphne, Velma, and Shaggy — Scooby is at the heart of one of the most enduring cartoon franchises in television history. The charismatic canine has now fronted more than a dozen TV series, plus direct-to-video animated films, comic books and live-action cinematic releases.

“In Scooby-Doo’s comedy-mystery adventures, he and the gang investigate strange plots in eerie locales as they travel in their colorful van, the Mystery Machine. Scooby Snacks are always on hand; the tempting treats empower the cowardly Scooby to sniff out clues. Once the gang musters courage, cooperates, and persists in their dogged investigations, the spooky schemers’ plots are exposed.”

Scooby-Doo is just the latest in a line of recognizable cartoon dogs that have had their cultural identities elevated by appearing on U.S. stamps.

McGruff the Crime Dog, who has appeared in televised and published public service announcements since 1979, was featured on a 20¢ stamp in 1984 (Scott 2102), along with his popular catchphrase “Take a Bite Out of Crime.”

Dug the dog from the Pixar animated film Up appears with the movie’s protagonist, Carl Fredricksen, on a forever stamp issued in 2011 (Scott 4556).

And the design of a 2010 stamp honoring Garfield the cat also includes his frequent fall guy, Odie the dog (Scott 4470).

The Postal Service did not publish technical details for the Scooby-Doo forever stamp prior to this issue of Linn’s going to press. Press sheet and first-day cover details also were not revealed. Those details will be presented in Linn’s when they become available.