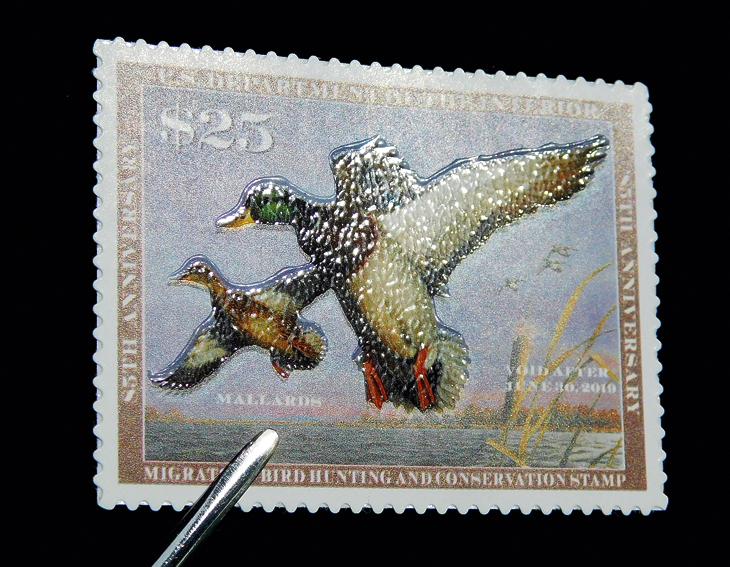 Shown here angled against a bright light, the new federal duck stamp has a textured clear gloss varnish applied to the images of the mallards in the foreground of Robert Hautman’s illustration. The same varnish application is on the stamp regardless of th

The United States $25 Mallards federal duck stamp issued in three different formats on June 29 is essentially one stamp, according to the editors of the Scott Specialized Catalogue of United States Stamps and Covers.

As a result, a single major catalog number of United States Scott RW85 has been assigned to the duck stamp by the Scott catalog editors, and applies to the single stamp regardless of the format from which it came.

The $25 Mallards migratory bird hunting and conservation stamp, also known as the federal duck stamp, was issued by the U.S. Fish and Wildlife Service with a ceremony in Hanover, Md.

The stamp is offered in panes of 20, a pane of four commemorating what the Fish and Wildlife Service describes as the 85th anniversary of the stamp series, and in a pane of one with decorative selvage.

All three formats were printed by Ashton Potter USA Ltd., the Williamsville, N.Y., firm that is also a contract printer for the U.S. Postal Service.

Although federal duck stamps are not valid for postage, they are popular among stamp collectors and are listed among revenue stamps in the Scott catalog.

For the first time ever, the 2018 federal duck stamp is available as a self-adhesive only.

When first issued in 1934, the annual stamp was perforated with moisture-activated gum.

Beginning in 1998, the stamp was issued in both die-cut self-adhesive format and in perforated lick-and-stick format, resulting in two distinct collectible varieties.

Rachel Fisk Levin of the U.S. Fish and Wildlife Migratory Bird Program told Linn’s Stamp News that the moisture-activated glue format was discontinued because of changes in technology and in the availability of printing material.

The essential details of the individual stamps as listed in the Scott U.S. Specialized catalog and the Scott Standard Postage Stamp Catalogue are the same: the size of each stamp; the gauge of the die-cut simulated perforations, which measure 11 by 10¾; the colors; and so on.

Additional aspects of the single stamp are also the same regardless of the format.

Technical details for this stamp as released by the U.S. Postal Service describe the inks used as cyan, magenta, yellow and black, along with invisible fluorescent ink.

That invisible tagging on the stamp glows yellow when viewed under shortwave ultraviolet light, and appears shaped along the lower outlines of the alighting ducks.

The fluorescent ink was also used to print a fifth tiny duck symbol and plate number digit in the selvage on the multistamp panes.

And an additional element has been applied to the stamp design, though it was not apparent in the published technical details.

A cut-to-shape coating of what appears to be a clear textured gloss varnish entirely covers the two ducks that dominate the design foreground.

That coating might not be noticed immediately by an observer looking casually at the stamp, but its shiny surface becomes apparent when the stamp is viewed while angled slightly against a light source.

The surrounding stamp surface outside of the varnish application has a soft matte appearance.

Like the fluorescent ink application, the varnish can be considered a security element that would make counterfeiting the high-denomination offset-printed duck stamp much more challenging.

The new stamp reproduces an acrylic painting of mallards by Minnesota artist Robert Hautman. The painting shows a mallard drake and hen coming in for a landing on a body of water, with cattails in the lower right corner. Three additional birds in flight are visible in the background.

Additional information about the new federal duck stamp was published in an article on page 1 of the June 25 Linn’s.