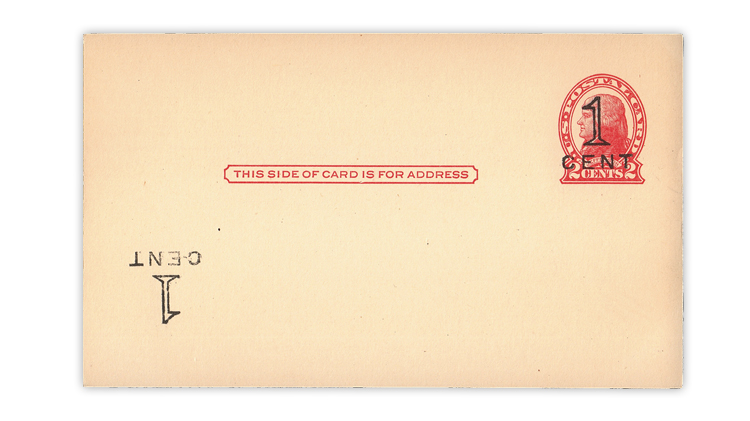 This United States 1920 1¢ on 2¢ red Thomas Jefferson postal card on cream paper with double surcharge, one inverted at lower left was recently certified genuine by the Philatelic Foundation. It is the first example of the error to come to the attention o

A United States 1920 1¢ on 2¢ red Thomas Jefferson postal card on cream paper with double surcharge, one inverted at lower left (Scott UX35a) was certified genuine in late March by the Philatelic Foundation.

The error, first listed in the 2008 Scott Specialized Catalogue of United States Stamps and Covers, was brought to the attention of Linn’s Stamp News and the Scott catalog editors by Mike and Mary Garrity of Missouri, who said they “purchased it as part of a collection that had been passed down within a private estate.”

The Garritys were prompted to contact Linn’s about their recently certified error because of a footnote that first appeared in the 2022 Scott U.S. Specialized catalog, “Editors would like to see an example of UX35a.”

When asked what he intends to do with the Jefferson double-surcharge postal card, he replied he has no plans at the moment.

Although a final determination has not been made at this time, it is likely that the new footnote following the Scott UX35a listing will be removed from the 2023 Scott U.S. Specialized catalog, which is scheduled to be published in October.