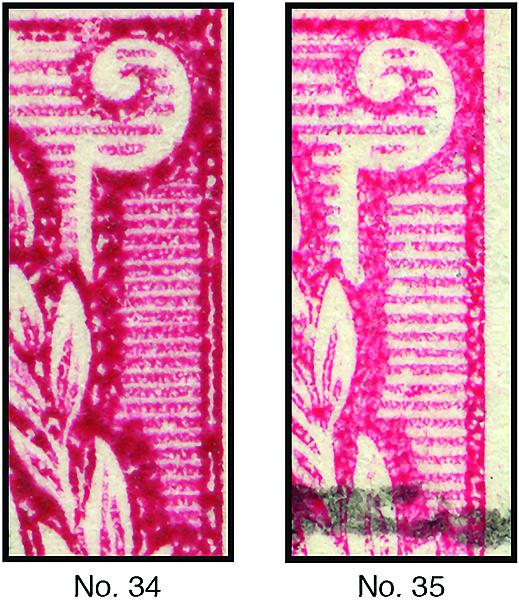 It is that time of the year, again.

Several sharp-eyed catalog users have sent us information about inconsistencies and errors that they have found in the catalogs.

While many of the messages we receive involve easily fixed mistakes, primarily typos in the catalog listings, a few require a bit of research.

A good example is a message I received concerning the Scott listings for South Africa Scott 34 and 35. The description of these two stamps in Vol. 6 of the 2015 edition of the Scott Standard catalog says that Scott 35 has a 2-millimeter space between the “L” of “POSSEEL” and the “I” of “IMKOMSTE,” while Scott 34 has a 1mm space. Our correspondent disagreed with the measurements and offered to loan us his examples for examination and scanning.

After a thorough review of literature available in the Amos Media Co. library and an examination of the stamps, we decided to change our listings.

Firstly, we added the photograph, shown here, above the design notes for South Africa Scott 33-44. This enlarged photo shows one of the diagnostics used to identify Nos. 34-35.

Secondly, we added a separate paragraph describing those diagnostic features.

Another update to the catalog listings was prompted by a letter from a dealer who was cataloging some of his stock of Ceylon. In Vol. 2 of the 2015 Scott Classic Specialized catalog, Ceylon Scott 203 and 223 are both described as red violet, as are the War Tax overprints, Scott MR3-MR4. Our dealer friend noted that his stock also included several purple stamps, which led to his inquiry.

A check of Scott’s reference collection turned up stamps of both colors, so clearly an update to the Scott listings was in order. The 2016 Scott Classic Specialized catalog will contain four new minor listings. Scott 203a is the base listing in purple, while Scott 223a is the 1¢ surcharge on Scott 203a. Scott MR3c was assigned to Scott 203a overprinted “WAR STAMP,” with Scott MR4b assigned to the same overprint on Scott 223a.

In addition to these new numbers, we had to shift some of the values, because our existing listings of the red violet shade actually carried values more appropriate for their purple cousins. Scott 223 gained new values for mint and used of $3 and $3.50, respectively. Scott MR3 went to $4 and $3.50 for mint and used examples.

Lastly, Scott MR4 mint is assigned a value of $2.75. The existing catalog values for these items were reassigned to the more common purple stamps.

As you use the Scott catalogs, if you find something you believe to be amiss, please send an e-mail to editor Charles Snee (csnee@amosmedia.com) with the issuing country, Scott number and a description of the error. If we need more information, we will respond via e-mail.

Thanks to all the eagle-eyed catalog users who contact us, some on a regular basis, with items that need to be corrected.

The Scott catalogs are better every year because of your feedback.