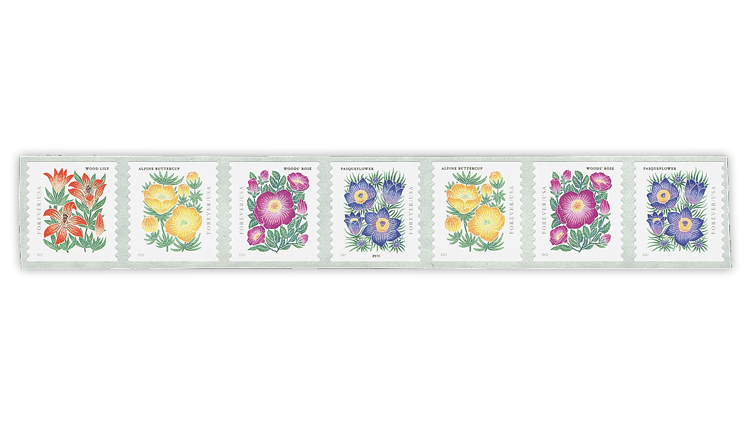 Scott catalog numbers have been assigned to the four United States Mountain Flora coil stamps issued March 14. Shown is a plate number strip of seven. The plate number, a “P” followed by four single digits, appears on the Pasqueflower stamp in the center

A strip of four Mountain Flora coil stamps (in Scott number order) is Scott 5675a.

A plate number (“P” followed by four single digits) appears on every 27th stamp in a given roll of 3,000 or 10,000. The plate number always appears on a Pasqueflower stamp because of the even number of different designs (four) and the odd plate number interval.

A plate number strip of seven contains one Scott 5672 and two each of Scott 5673-5675. The Pasqueflower stamp without a plate number is in position seven in the strip.

As shown on the plate number strip of seven illustrated here, there are gaps between each stamp in a roll, and the stamps are on backing paper taller than the stamps. These features allow the use of automated equipment to affix the stamps to large quantities of mailpieces in a short period of time.

The Mountain Flora stamps also were issued in a double-sided pane of 20, which the U.S. Postal Service calls a booklet. Scott numbers have not yet been assigned to these stamps.