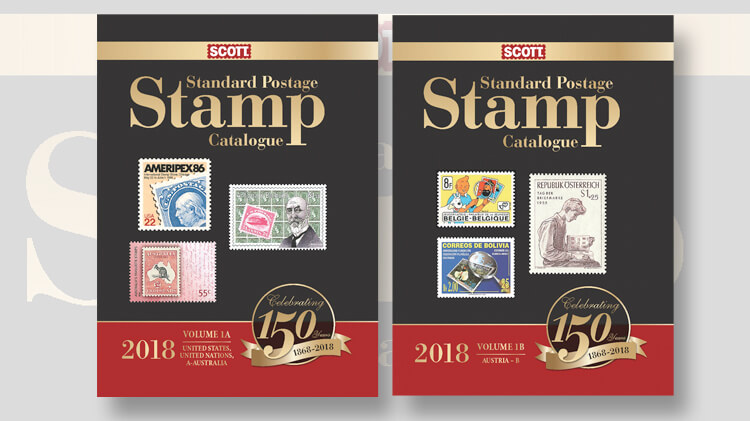 The recently published Vols. 1A and 1B of the 2018 Scott Standard Postage Stamp Catalogue have more than 13,600 value changes.

The 2018 edition of the Scott Standard Postage Stamp Catalogue celebrates the 150th anniversary of the Scott catalogs. The title pages of each volume of the 2018 Scott Standard catalog state that this is the 174th edition of the catalogs (and it is). In September 1868, John Walter Scott published his first stamp catalog. The catalog, titled A Descriptive Catalogue of America and Foreign Postage Stamps, Issued from 1840 to Date, is considered to be the first Scott stamp catalog.

The Scott catalog has come a long way since its humble beginnings as a 24-page bound pamphlet. The Scott Standard catalog now lists more than 700,000 stamps from more than 600 stamp-issuing entities. Today’s catalogs are updated annually.

Splitting each volume has several advantages. The reduction in weight makes each volume about 50 percent lighter in weight than the volumes in the previous six-volume set, and the catalogs are vastly easier to handle. For the convenience of the user, each volume of the 2018 12-volume set includes its own introduction, editor’s letter, and index.

Vols. 1A and 1B have a total of more than 13,600 value changes and many editorial enhancements.

Collectors will be pleased to find the organization of countries per catalog is largely unchanged:

Vols. 1A and 1B went on sale April 1. A review of the changes in each volume is presented in the From the Scott Editors column in the April 17 issue.