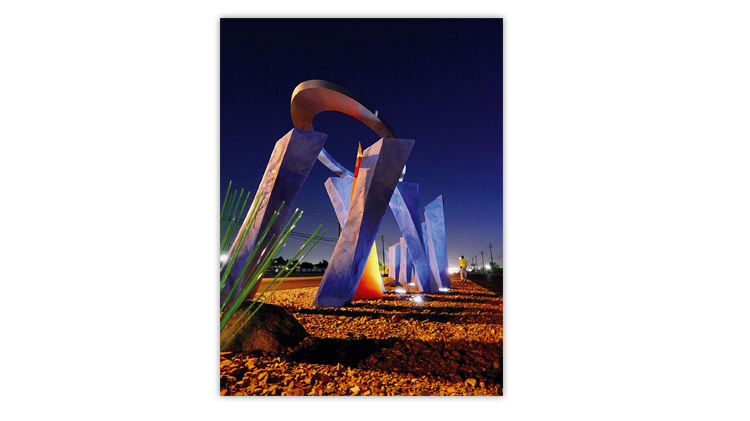 Robert S. Davidson’s sculpture Absolute Ceiling is on display near Nellis Air Force Base in Nevada. In 2018 Davidson was awarded an almost $3.6 million judgment against the United States Postal Service for its unauthorized use of his Lady Liberty sculptur

To most stamp collectors, Robert Spencer Davidson’s legacy is clear.

The Nevada sculptor won a place in philatelic history in 2018 by securing a $3,554,946.95 judgment from the United States Postal Service for a stamp design that inadvertently featured one of his sculptures. It was the largest such judgment of its kind at the time.

To residents of Nevada, however, Davidson has a different legacy.

To them, he is renowned as a sculptor of what the Clark County, Nev., government describes as large-scale projects such as his Lady Liberty statue at the New York New York Hotel and Casino in Las Vegas.

Lady Liberty is the sculpture that the USPS pictured on a forever postage stamp in 2010 without Davidson’s approval, mistakenly thinking it was using an image of the Statue of Liberty in New York Harbor.

The almost $3.6 million award by a federal judge that the Postal Service initially sought to appeal was finally settled in 2019 when the agency dropped its appeal and paid the sculptor the judgment plus interest.

Davidson told Linn’s in late May that the bitterly fought lawsuit is in his rearview mirror, and he is continuing to press his public art career forward.

On May 24 the Clark County government dedicated his latest project near Nellis Air Force Base, a large aviation-themed sculpture titled Absolute Ceiling.

Named for the highest altitude above sea level at which an aircraft can maintain horizontal flight, Davidson’s sculpture is meant to be the county’s salute to the men and women who work at the military base, including those who serve with the Thunderbirds, the Air Force’s flight demonstration squadron.

Davidson won a grant from Clark County to begin work on the $500,000 project in 2019. The county describes Absolute Ceiling as “a large scale 134-foot sculpture that includes 22 cobalt blue rising and twisting columns that meet at a bright orange central pylon that protrudes upward through a 20-foot wide aluminum ellipse.”

All elements, including bright green metal yuccas, are illuminated at night to create what Davidson hopes will be a bright splash of color in a Nevada highway median.

“My ‘art’ is ever changing,” he said in an email to Linn’s. “I put art in quotes because I do a variety of artistic things.”

“The law suit really has not changed anything in my life or my business. I still pursue a mix of unusual architectural accents and designs and I’m always ready for the challenges of a large sculpture project if it presents itself,” Davidson said.

He has begun construction of a new studio in northern Idaho where he spends his summers. He said he builds wooden boats and wooden stand-up paddleboards, and also contributes work to parks in the area.

Another project he has underway is called “Ranch at Red Rock” which runs along the original Old Spanish Trail. It will have an outdoor stone amphitheater, event center and restaurant.

Despite the large award he and his lawyers won from the Postal Service in the U.S. Court of Federal Claims, Davidson said “my financial situation really has not changed that much.”

“As I’m sure you know, it is very expensive to fight something like this, especially for 8 years,” he said.

“It was more about the principle with USPS,” Davidson said. “Even after they admitted it was not the original Statue of Liberty, they still only gave credit to the photographer who sold the photo (used on the stamp) to Getty Images.”

“I keep thinking I am retiring, but when an exciting project pops up, I get sucked right back into it,” Davidson said.

Davidson offered to send photos of Absolute Ceiling, wryly adding that it “probably will not be featured on a stamp, but you never know.”

A Postal Service spokesman declined to comment on the Davidson case.