Searching for a 1944 Original Order of Zunks cover 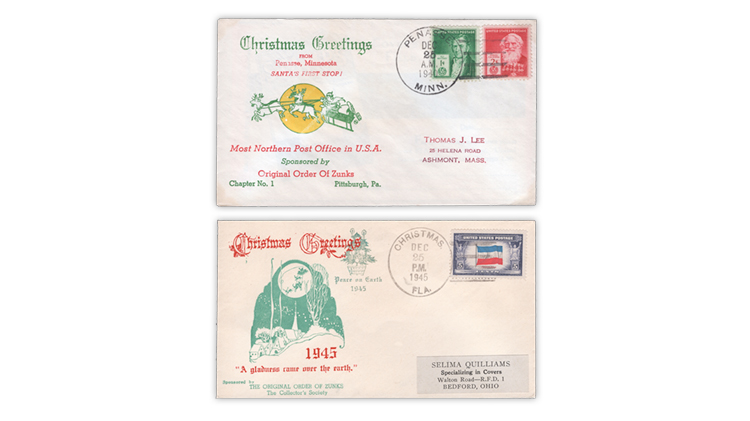 Original Order of Zunks covers were produced from 1940 to 1945 for holidays and major World War II events. The author has examples of Christmas cards such as these from 1940 and 1945 for all the years except 1944. Has any Linn’s reader seen a 1944 cover?

The Original Order of Zunks was an active cachetmaker group of Pittsburgh, Pa., collectors around 1940-45. During those years, the group produced about 50 covers celebrating holidays and major World War II events.

Original Order of Zunks covers (no, I don’t know where the name came from) can often be found at reasonable prices in the stocks of dealers in the eastern part of the United States, especially Ohio and Pennsylvania.

I have been trying to put together a complete set for years, and it has been a struggle because the covers were produced to order in varying quantities and some that I would expect to exist are not known at all. An example is the likely existence of a cover celebrating Christmas 1944.

Martin and I have created a list of what we know to exist and what we think should exist. A copy of the list can be sent as an email attachment to any Linn’s reader who requests one. Send the request to me at jmhstamp@verizon.net, or request a hard copy at Box 1125, Falls Church, VA 22041-0125.

If any Linn’s reader has or has seen a Christmas 1944 Order of Zunks cover, I would be delighted to hear from you.