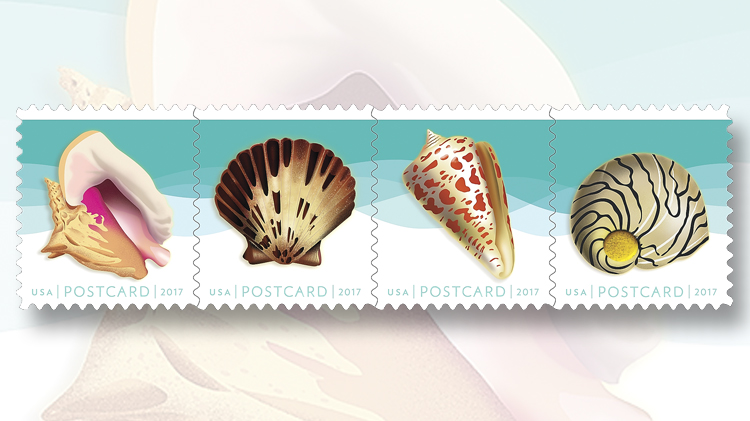 Four nondenominated (34¢) seashells stamps for the postcard rate will be issued Jan. 28 in panes of 20 and coils of 100.

The nondenominated (34¢) stamps will be sold in panes of 20 and coils of 100. Sergio Baradat, art director for the United Nations Postal Administration, created the four designs, which show the queen conch (or pink conch), the Pacific calico scallop, the alphabet cone shell and the zebra nerite.

“The highly stylized stamp art expresses a lighthearted, artistic view of shells,” the U.S. Postal Service stated in its Stamp Announcement 17-04. “The horizontal swaths of white and blue in the background suggest waves washing the shells onto a beach.”

The new set is the second to be issued with four designs and bearing the nondenominated postcard-rate designation. The first set is the Coastal Birds set of four, issued June 1, 2015 (Scott 4991-4998). The Coastal Birds set, which is still on sale, was also issued in panes of 20 and coils of 100, and presumably will be replaced in time by the new Seashells issue.