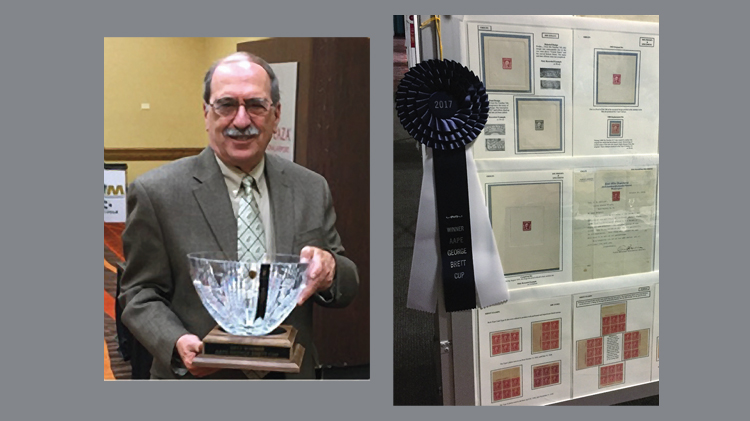 Nick Lombardi won the first annual Brett cup competition, which took place in 2017. The award was for his multiframe exhibit “The 1903 Two Cent Washington Shield Issue.”

Exhibits of modern philatelic material will enjoy the limelight when the Rocky Mountain Stamp Show takes place in May.

The award is a 10-inch Waterford cut glass bowl.

Lombardi is pictured here with his award and part of the first frame of his exhibit.

His exhibit was one of 23 top-level 20th-century exhibits at the show.

As a collector of modern material myself (among many other items from different areas), I am thrilled to see such enthusiasm for this area of philately.

It is also encouraging to have a show latch onto this as a marketing tool for exhibits and to attract an audience to the show.

Do you want to participate in the exhibition? There are a few guidelines for entering.

The exhibits are selected from among those shown in the last three years at APS World Series of Philately stamp shows and which have won either the grand or reserve grand in 2015-16, or received 93 or more points in 2017.

There were 66 eligible participants invited and 150 frames set aside.

Even though that limits things, it sure drives some interesting competition.

If you are not one of the 66 exhibitors eligible to enter, I would consider this motivation to do what it takes to get your exhibit to the required level for future competitions.

And if you are one of the invited exhibitors, you might want to get your entry in early.