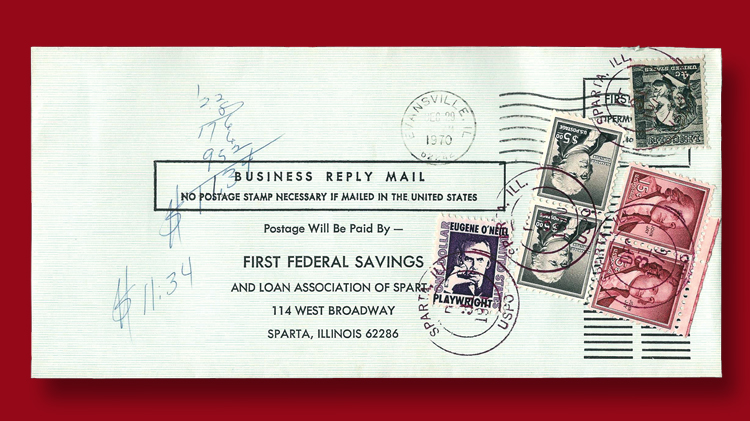 A pair of United States $5 Alexander Hamilton stamps pays most of the $11.34 postage due on this 1970 top-of-the-stack business reply mail envelope.

Can you remember the first time you found a scarce or rare item lurking in plain sight at a stamp show?

Such discoveries sometimes are borne of disciplined, persistent searching over many years, as you seek out that elusive item for your collection.

At other times, you’re after something else when that nugget of philatelic gold surfaces suddenly.

Earlier this year, my friend Jay Stotts came to the Garfield-Perry March Party stamp show in Cleveland. Among other things, he was on the hunt for covers franked with the United States 15¢ John Jay stamp (Scott 1046, 1046a), from the popular Liberty series of definitive (regular-issue) stamps that began in 1954.

While perusing the postal history stock of one of the dealers at the show, Stotts came across the cover illustrated here.

It is a business reply mail (BRM) envelope sent Dec. 29, 1970, from Evansville, Ill., to the First Federal Savings and Loan Association of Sparta in Sparta, Ill.

Haphazardly plastered on the right side of the envelope are six stamps, a mixture of Liberty and Prominent Americans issues: a pair of $5 Alexander Hamilton stamps (Scott 1053), a $1 Eugene O’Neill stamp (1294), a pair of 15¢ John Jay stamps and a 4¢ Abraham Lincoln stamp (1282).

“I usually look through Liberty series covers looking for usages of the John Jay stamp and that’s what originally caught my eye before I noticed the Hamilton pair,” Stotts told me.

According to Stotts, this $5 Hamilton cover was tucked among the dealer’s stock of pricier items, including first-day covers of the Fourth Bureau issue — another of Stotts’ collecting passions.

Why is this cover important? According to Linn’s census, it is only the second commercial cover franked with a multiple of the $5 Hamilton stamp to be discovered. It joins four other postage due uses bearing single $5 Hamilton stamps that are known as top-of-the-stack covers.

Such covers document the payment of postage due on a stack of similar mailings. Evidence of payment is shown via stamps affixed to the top cover in the pile.

Keep in mind that registered bank tags franked with multiple $5 Hamilton stamps are much more common than this and the other known commercial covers.

The Scott Specialized Catalogue of United States Stamps and Covers values the $5 Hamilton on a registered bank tag at $25. In contrast, an in-period, commercial cover bearing the $5 Hamilton in combination with other stamps is valued at $1,800. This value is italicized to indicate substantial market variability.