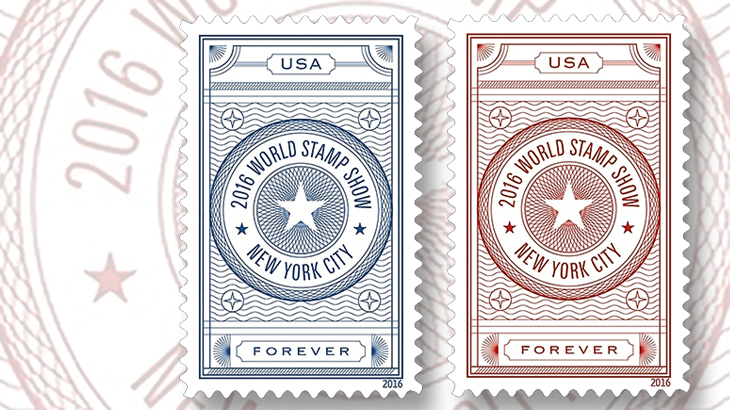 Two World Stamp Show forever stamps will be issued together in a 24-stamp pane that can be folded into a format described as a folio by the U.S. Postal Service.

The United States Postal Service is again commemorating World Stamp Show-NY 2016 with a set of two forever stamps that will be issued at the show on opening day, May 28.

The new set celebrates the international show by reintroducing and revising a design that first appeared on stamps last year.

The lithographed World Stamp Show issue of 2015 presented two stamps, one red and one blue, alternating on a single pane of 20.

The stamp design shared by the two stamps blends geometric elements with a central medallion featuring a star in the middle, surrounded by the words “2016 World Stamp Show” around the top and “New York City” below.

The design for the new stamp set repeats that design but turns the colors inside out by using red (or blue) printing for the areas that appeared white on the 2015 stamp, and letting those inked lines on the earlier stamps appear uninked on the new issue.

A second important difference is the fact that the new pair will be intaglio-printed, creating what collectors in casual conversation call “engraved” stamps.

Intaglio printing of line-engraved designs was the norm on U.S. stamps for more than a century before multicolor gravure printing and offset lithography slowly but surely came to dominate.

A third variation with this new set will see the stamps being issued in a 24-stamp folded pane that the Postal Service is describing as a stamp folio.

The two 12-stamp groupings are separated by a vertical gutter that allows the pane to be folded.

The reverse side of the pane is printed offset and includes five paragraphs of text about the international show, reproductions of the central ornaments from the two new stamps, and the Statue of Liberty logo of the stamp show.

Technical details and first-day cancel ordering information for these World Stamp Show stamps are given below.

The first-day ceremony for the new stamp set will take place Saturday morning at 11 a.m., according to the World Stamp Show event schedule. The ceremony, like the stamp show, is free and open to the public.

According to information published in the April 28 Postal Bulletin of the United States Postal Service, the World Stamp Show folio “will only be available through The Postal Store ... or by calling 800-782-6724.”

This unusual warning appears to indicate that the new World Stamp Show set will not be sold in post offices.

Standard ordering instructions apply. Collectors requesting first-day cancels are encouraged to purchase their own stamps and affix them to envelopes. The first-day cover envelopes should be addressed for return (a removable label may be used), and mailed in a larger envelope addressed to World Stamp Show NY-2016 Folio, Special Events Coordinator, 380 W. 33rd St., New York, NY 10199-9998.

Requests for first-day cancels must be postmarked by July 28.