Here’s all you need to know about second U.S. stamp for Henry David Thoreau 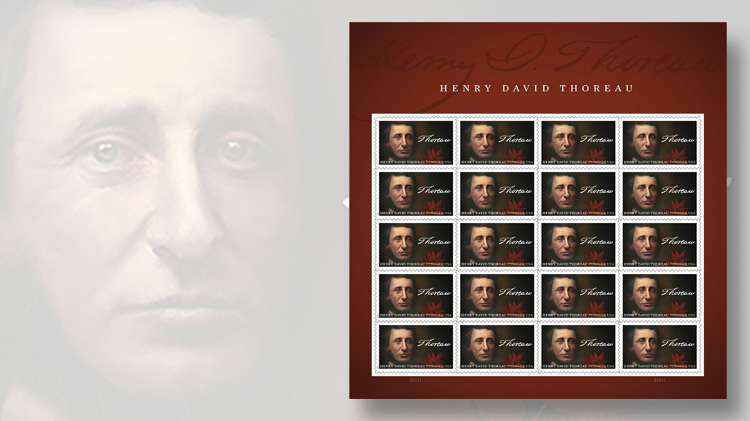 The Henry David Thoreau stamp is being issued in a pane of 20 with decorative selvage across the top that reproduces Thoreau’s signature. A press sheet of nine panes also is being offered. 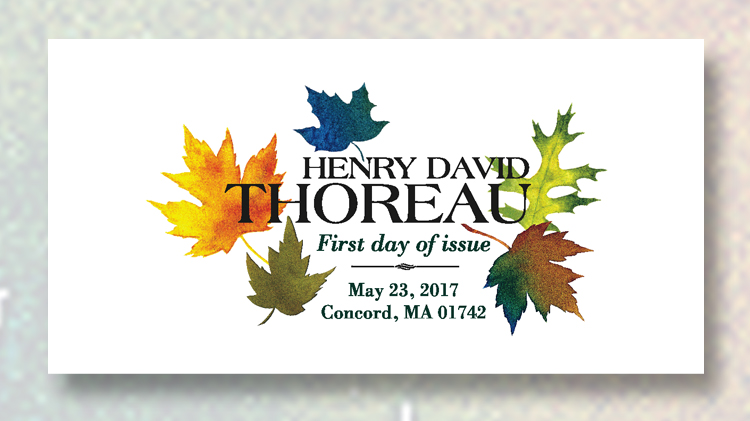 A similar digital color postmark will be used on some of the uncacheted first-day covers for the Thoreau issue sold by the Postal Service. 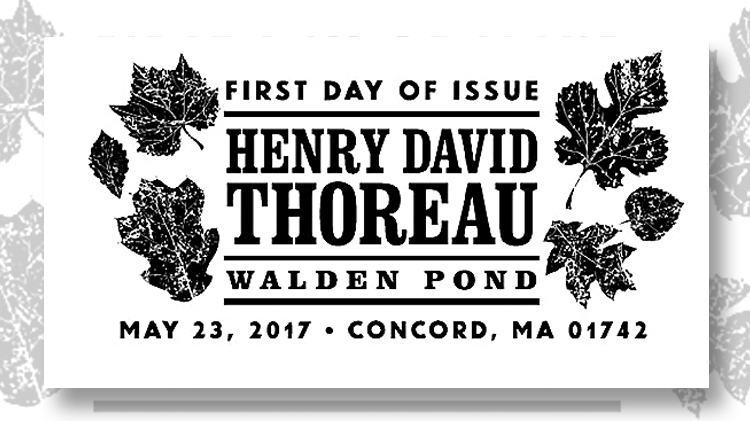 The black first-day cancel for the new Thoreau stamp has a pictorial design featuring maple leaves, in tribute to the writer’s emphasis on natural settings in Walden and other works. 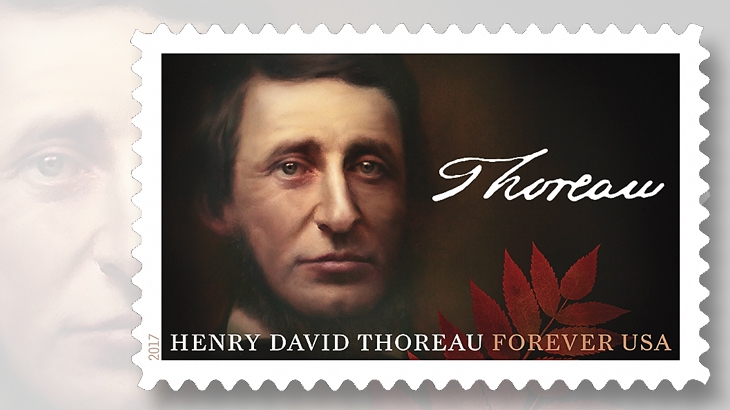 The Henry David Thoreau forever stamp will be issued May 23 with an 11 a.m. ceremony at the Walden Pond State Reservation Visitors Center. 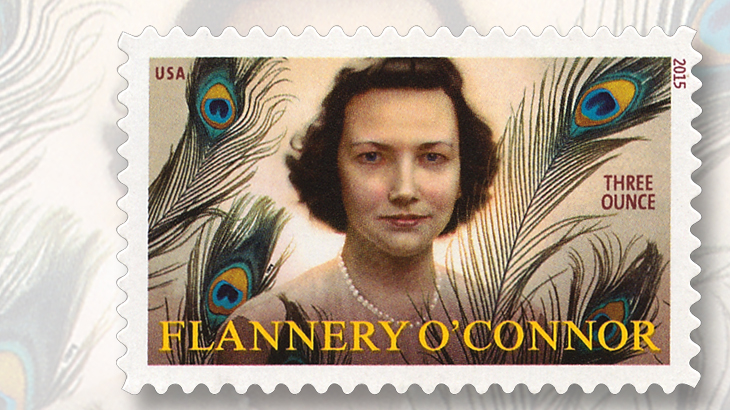 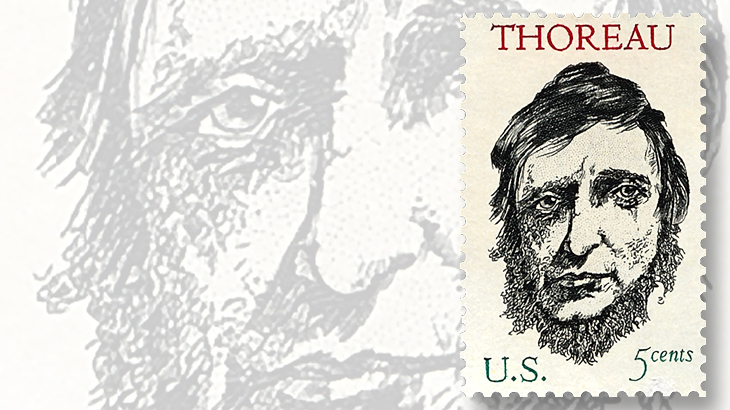 A 5¢ commemorative stamp honoring Thoreau was issued July 12, 1967, to mark the 150th anniversary of the writer’s birth in Concord, Mass.
Previous
Next

A new forever stamp commemorating the 200th birth anniversary of writer, philosopher, and abolitionist Henry David Thoreau will be issued May 23.

The United States Postal Service advises those wishing to attend to RSVP online.

The stamp is offset-printed in panes of 20 by Banknote Corporation of America, one of the two security printers contracted to print stamps for the Postal Service.

Along with the 20-stamp pane, collectors will have an opportunity to purchase a die-cut press sheet of the Thoreau stamp consisting of nine panes (180 stamps) for the $88.20 face value.

Even though the stamp itself has a horizontal orientation, the pane of 20 is perfectly square, according to technical details provided by the Postal Service, measuring 7¼ inches by 7¼ inches. The press sheet measures 22 inches by 22 inches.

The pane has a large decorative margin above the stamp block that includes Thoreau’s full name in white uppercase letters, and his signature, as “Henry D. Thoreau,” in a dark shade of red.

The stamp design by USPS art director Greg Breeding features an oil-on-panel portrait of Thoreau by artist Sam Weber at left, based on an 1856 daguerreotype by Benjamin Maxham. The portrait is offset by Thoreau’s signature (last name only) in white at right, all against a dark background.

Along the bottom of the stamp is the inscription “Henry David Thoreau Forever USA,” and a branch of sumac leaves.

Thoreau was born in Concord July 12, 1817, and attended Harvard University, graduating in 1837. After brief excursions into teaching and the family’s pencil business, Thoreau struck a close friendship with poet Ralph Waldo Emerson and followed a path of his own as a poet and essayist. The two men were leading figures in the philosophical movement known as transcendentalism.

Deeply opposed to slavery and disdaining government directives, Thoreau wrote Resistance to Civil Government after spending a night in jail for refusing to pay a mandatory poll tax. The essay later came to be known as Civil Disobedience.

Beginning in July 1845, he lived for more than two years in a small house he built himself on property owned by Emerson at Walden Pond. His reflections on living alone, farming, and communing with nature were told in Walden, his most famous work.

Though he lived in or near Concord most of his life, Thoreau also traveled and wrote about his experiences, and continued his denunciation of the government that tolerated and upheld the institution of slavery.

Thoreau suffered the effects of tuberculosis for much of his adult life, and died at age 44 on May 6, 1862, following an extended illness.

Considering his anti-government perspective, there is some small irony, perhaps, in the U.S. Postal Service — a government agency  — celebrating Thoreau on a postage stamp.

“For my part, I could easily do without the post-office,” Thoreau wrote in Walden. “I think that there are very few important communications made through it. To speak critically, I never received more than one or two letters in my life — I wrote this some years ago — that were worth the postage.”

The Postal Service is considerably more complimentary of its chosen stamp subject, stating, “With his personal example of simple living, his criticism of materialism and the questions he raises about the place of the individual in society and humanity’s role in the natural world, Henry David Thoreau (1817-1862) continues to inspire readers.”

The new stamp is, in fact, the second from the United States to honor Thoreau. The first, a 5¢ commemorative issued July 12, 1967, marked the 150th anniversary of Thoreau’s birth. Its portrait of the writer was created by a prominent artist, Leonard Baskin (1922-2000), as his first and only stamp illustration.

The O’Connor stamp was part of the Literary Arts commemorative series, but the new Thoreau stamp is not.

According to information provided by the Postal Service, Weber also created artwork for a set of five forever stamps showing different sharks, which is planned for later this year. An issue date has not been announced for the Sharks set.

The Postal Service will offer pictorial first-day cancels in black and in color for the Thoreau stamp.

Both postmark designs show individual leaves from trees at left and right, with the name Henry David Thoreau in the center.

The postmarks will be struck on stamps affixed to uncacheted first-day covers offered for sale by the Postal Service, and the black postmark will be provided in response to requests from collectors. Collectors can also obtain the color postmark for a fee, following specific Postal Service guidelines.

Standard ordering instructions apply. Collectors requesting first-day cancels are encouraged to purchase their own stamps and affix them to envelopes. The first-day cover envelopes should be addressed for return (a removable label may be used), and mailed in a larger envelope addressed to FDOI-Henry David Thoreau Stamp, USPS Stamp Fulfillment Services, 8300 NE Underground Drive, Suite 300, Kansas City, MO 64144-9900.

Requests for first-day cancels must be postmarked by July 23.