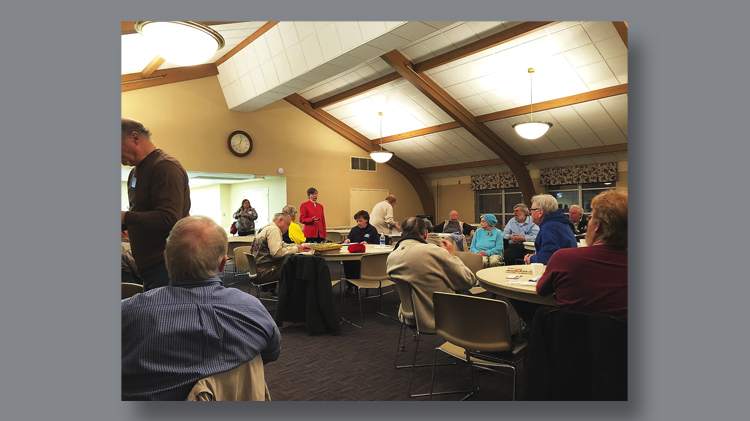 Over the years, organized stamp clubs have changed in regards to the number of attendees, frequency of meetings and number of clubs. But in some locations, the groups remain alive and well.

The Dayton (Ohio) Stamp Club is quite active and holds a couple meetings each month throughout the year.

I’m a member of the club and recently attended a meeting that featured a talk by Citizens’ Stamp Advisory Committee chair and Linn’s columnist Janet Klug. About 30 others also attended.

As CSAC meetings are conducted confidentially, Klug wasn’t able to speak much about her role on that committee. She did provide the address to send in requests for stamp subjects to those attending the club meeting in Dayton.

She also shared stories about moments that helped shape her interest in stamp collecting. My favorite was about actress Doris Day sending her used stamps clipped from fan mail after Klug wrote to her.

Another highlight for me was meeting a collector who said he did most of his purchasing online and also learned about the hobby online. He discovered the club a year ago and is a regular now.

On my drive home, I decided that I would ask Linn’s readers what some of their favorite stamp club activities are.

Here are a few that I have observed at several meetings I’ve attended.

One activity that I have frequently encountered is club members going through circuit books of stamps from the American Philatelic Society.

Another is the setting up of a mini sales area for club members to sell their duplicates.

Also, some clubs conduct a quick trivia contest and give out prizes to the person with the most correct answers.

Having a guest speaker, like Klug in Dayton, is another route that clubs take.

I understand that there are some challenges involved in finding speakers, but I have also noticed that sometimes all it takes is to ask.

Authors, exhibitors and other stamp collectors do travel, and some may be willing to add a visit to a stamp club or clubs to their travel plans.

Having a nice “welcome to the club” packet to give to new members is also a nice touch from my experience.