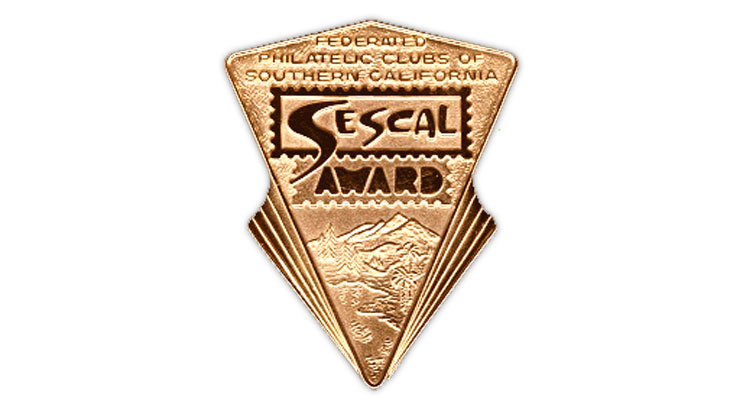 The show is set for Oct. 4-6 at the Ontario Convention Center, in Ontario, Calif.

The 75th annual stamp exhibition of Southern California, Sescal 2019, will celebrate the 150th anniversary of the Transcontinental Railroad. On display will be a cover from the first mail car of the railway.

Coordinated by the Federated Philatelic Clubs of Southern California, the show is set for Oct. 4-6 at the Ontario Convention Center, 2000 E. Convention Center Way in Ontario, Calif. Show hours are 10 a.m. to 6 p.m. Friday and Saturday, and 10 a.m. to 4 p.m. Sunday. Admission is free.

The show features a bourse of dealers selling stamps, covers, supplies and other items of philatelic and postal historical interest. In addition, Schuyler Rumsey will conduct a daily auction.

In 2018, 35 dealers attended the show in addition to the United Nations Postal Administration. About the same number of dealers are expected to participate this year.

The show also will feature a competitive exhibition and a court of honor.

Sescal is an American Philatelic Society World Series of Philately show. The multiframe grand-award winner will qualify for the Champion of Champions competition at the APS Stampshow Aug. 20-23, 2020, in Hartford, Conn. The exhibit winning the single-frame grand award will qualify for the single-frame Champion of Champions competition to be held Nov. 20-22, 2020, at Chicagopex 2020.

For hotel information and other Sescal details, visit the website www.sescal.org.