Sharing the story of stamps with a wider audience 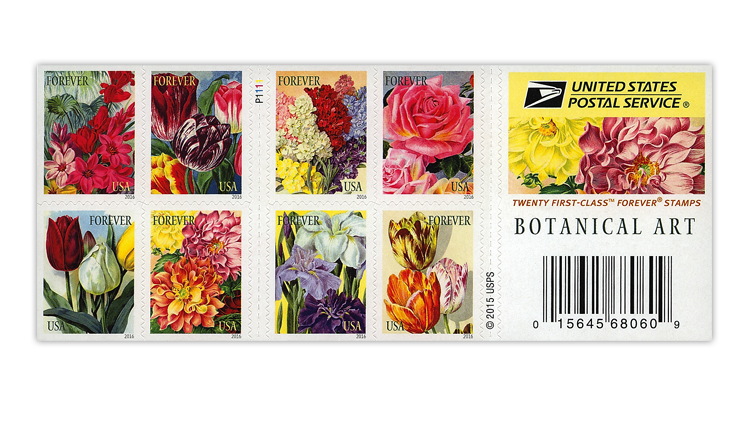 Wedding-themed stamps and even botanical stamps such as this Botanical Art set of 10 from 2016 (Scott 5042-5051) have increased in value since their issuance. The current Scott catalog value for a booklet pane of 20 of these stamps is $30, compared with a

Finding those moments to share the story of stamp collecting with a wider audience doesn’t happen every day. But when they do, we try our best to make the most of the opportunity.

Recently I was contacted by journalist Kristina Mastrocola of Woman’s World, a weekly magazine sold at supermarket checkouts that has a circulation of more than 1.5 million.

The magazine was working on a one-page feature about “undiscovered riches” that you might find in your home. It was published in the Feb. 1 issue of Woman’s World on page 42.

The introduction to the piece said, “Our insiders share the secret gems that may be worth thousands!”

The challenge was to decide what to talk about in such a small space, but ultimately I settled on the Washington-Franklin series from the early 1900s and some more modern stamps as well.

One of the most popular articles on Linn’s website is Ken Lawrence’s “Is your 1¢ green Franklin stamp Scott 594 or 596? If it is, you have a winner,” published in January 2015. In this article, Lawrence recounts the story of an Oklahoma collector buying a cover for 25¢ and later discovering that it had a pair of genuine Scott 594 coil waste stamps with a catalog value of $25,000.

I also mentioned the demand for recent wedding-themed and botanical stamps in the Woman’s World piece. Many of these stamps have been featured in Linn’s Stamp Market Tips column, a great resource to find what to look for. Of course, you also look up the stamp values in the Scott catalogs.

Also interviewed for the Woman’s World article were Jeff Garrett of Mid-American Rare Coin Galleries; and Rebecca Romney, a rare book dealer and the book specialist for the television show Pawn Stars.

For more information on Woman’s World, visit the magazine’s website.

How will collectors view the return of press sheets without die cuts?