Shirley Temple to be honored on 20th Legends of Hollywood stamp 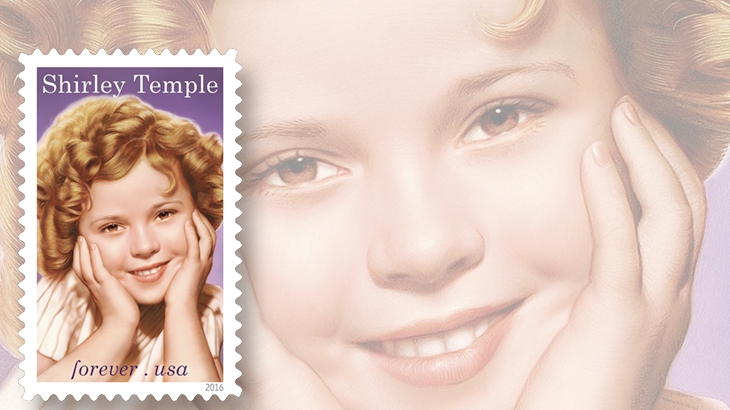 Child film star Shirley Temple will be honored on a forever stamp April 18 in Los Angeles, Calif. It is the 20th stamp in the long-running Legends of Hollywood commemorative series. 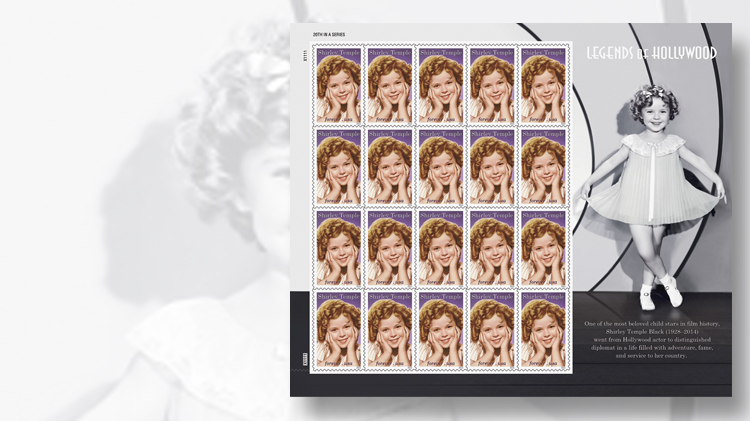 The Shirley Temple stamp pane includes a selvage photograph at right showing the young actress as she appeared in the short film Managed Money in 1933.
Previous
Next

The 20th stamp in the Legends of Hollywood commemorative series from the United States Postal Service will honor Shirley Temple, who starred in hugely popular films as a child actress in the 1930s and 1940s, and who grew up to become Shirley Temple Black, a respected diplomat and distinguished representative of the U.S. government.

The Shirley Temple forever stamp will be issued April 18 with a 1:30 p.m. first-day ceremony in Los Angeles, Calif., at the Geffen Playhouse at 10886 Le Conte Ave. The ceremony is open to the public.

A Postal Service website has identified U.S. Postmaster General Megan J. Brennan as the dedicating official for the event.

The new stamp honors Temple as the precocious and talented young star of family films and musicals who won America’s hearts during the Great Depression with her blond curls and dimpled smile.

The stamp design features a painting of Temple at approximately 7 years old, based upon a publicity photo of the young actress in Curly Top, a 1935 film from Fox starring John Boles and directed by Irving Cummings.

The stamp artwork is by Tim O’Brien, and the stamp was designed by USPS art director Ethel Kessler.

Technical details for the stamp were not immediately available from the Postal Service.

The self-adhesive stamp will be issued in panes of 20 with a black- and-white photograph of the young actress on the selvage at right. The picture is a publicity photo from the 1933 short film Managed Money, part of the early Frolics of Youth film series, directed by Charles Lamont and starring Frank Coghlan Jr.

The pane selvage also has printed on it a short summary of Temple’s life: “One of the most beloved child stars in film history, Shirley Temple Black (1928-2014) went from Hollywood actor to distinguished diplomat in a life filled with adventure, fame, and service to her country.”

Additional biographical text is printed on the back of the pane.

Born April 23, 1928, in Santa Monica, Calif., Temple was discovered by Lamont during dance classes when she was just 3 years old.

She appeared in Lamont’s short films for Educational Pictures and in the Tower Productions feature film The Red-Haired Alibi, a crime drama directed by Christy Cabanne in 1932.

She was signed by Fox Films soon after and was introduced in a dance scene in the 1934 movie Stand Up and Cheer! The Fox executives quickly extended her contract, and Temple began filming a series of upbeat and sentimental films that were intended to lift the hearts of Americans still struggling through economic hard times.

“I class myself with Rin Tin Tin,” she wrote in her 1988 memoir, Child Star. “At the end of the Depression, people were perhaps looking for something to cheer themselves up. They fell in love with a dog and a little girl.”

The film Bright Eyes was released at the end of 1934, and followed a heartwarming formula that would be the basis for many Shirley Temple films: An orphaned child finds her way into the heart of a caring adult who provides her with a happy home and future.

Temple quickly became a huge star in her own right and appeared in several films each year. Her mother was hired as hairdresser and acting coach, and Temple was taught by a tutor at the studio. Shirley Temple products such as books and dolls featuring Temple’s image became best-sellers, and royalty income from these items augmented her pay from the film studio.

As Temple grew into her teens, her films were less successful, though she starred in The Bachelor and the Bobby-Soxer with Cary Grant in 1947, and in A Kiss for Corliss with David Niven, her final feature film, in 1949.

The Blacks were married for more than 54 years. Shirley became involved in charitable and philanthropic causes, including an association with the National Multiple Sclerosis Society, serving as the group’s president.

Shirley Temple Black appeared occasionally on television after her film career ended, but she also became involved in politics as a member of the Republican Party.

Following an unsuccessful run for the House of Representatives in 1967, she was named by President Richard Nixon as a delegate to the United Nations in 1969, and in 1974 she was appointed by President Gerald Ford as the U.S. ambassador to Ghana. She served as chief of protocol for the United States during 1976 and 1977, and returned to the foreign service in 1989 when President George H.W. Bush named her as the U.S. ambassador to Czechoslovakia, a post she held for nearly three years.

She received an Academy Juvenile Award in 1935 when she was 6 years old, and 70 years later she received a Screen Actors Guild Lifetime Achievement Award.

In 1998 she was celebrated at the annual Kennedy Center Honors.

The Legends of Hollywood series began in 1995 with the release of the 32¢ Marilyn Monroe stamp. A single stamp in the series is released each year, though no stamp was issued in the series in 2012 or 2013.

Technical details and first-day cancel ordering information for the Shirley Temple stamp are given below.

Standard ordering instructions apply. Collectors requesting first-day cancels are encouraged to purchase their own stamps and affix them to envelopes. The first-day cover envelopes should be addressed for return (a removable label may be used), and mailed in a larger envelope addressed to Shirley Temple Stamp, U.S. Postal Service, Attn: Marketing, 7001 S. Central Ave., Room 307, Los Angeles, CA 90052-4200. Requests for first-day cancels must be postmarked by June 18.