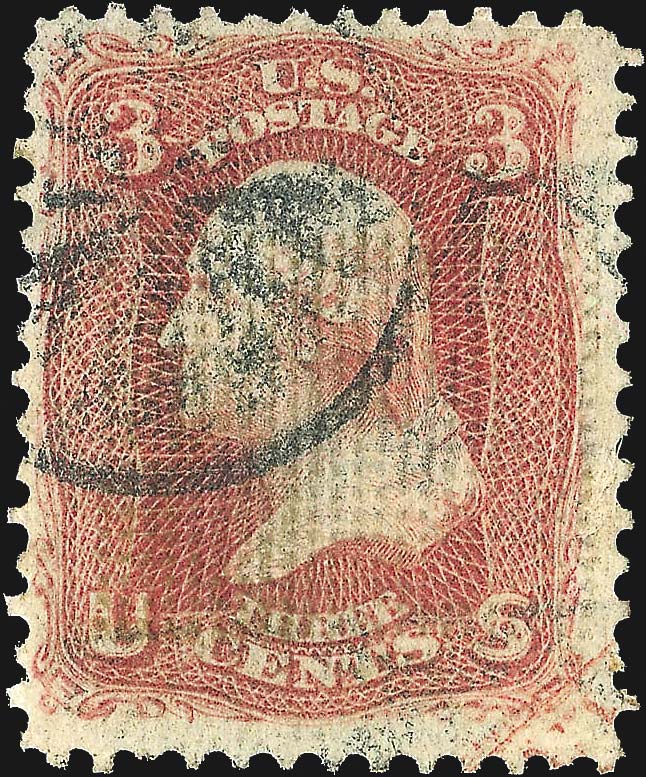 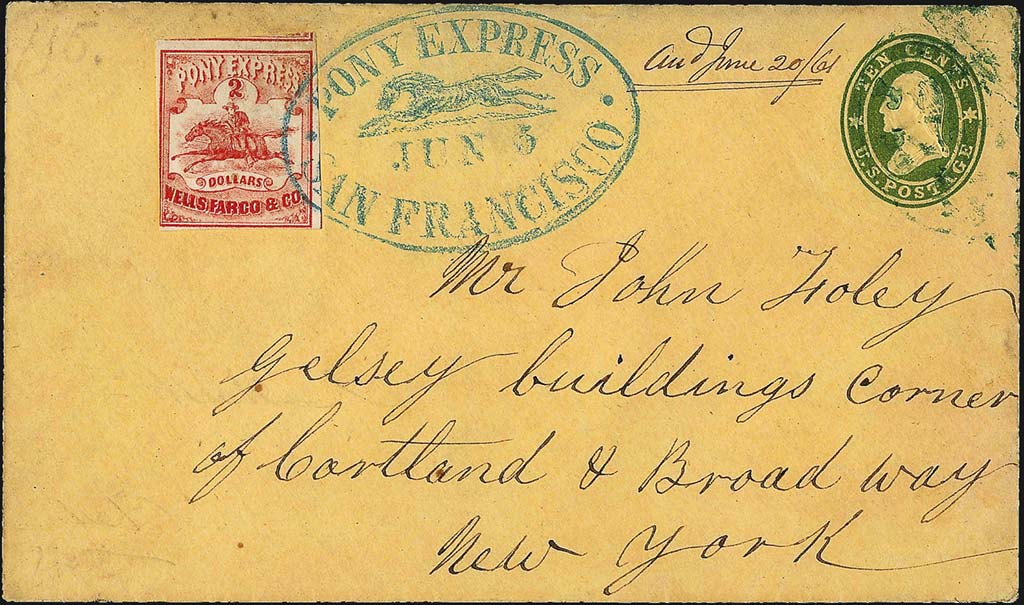 Seven different auction catalogs document the series of sales being held from June 22 through June 25 by Robert A. Siegel Auction Galleries of New York.

The sales are all taking place at the Siegel Auction Galleries in midtown Manhattan.

The offerings range from classic United States stamps and postal history to telegraph stamps, carriers and locals, and a selection of worldwide rarities that includes a seldom-seen U.S. stamp with a catalog value of $1 million.

That stamp turns up in the final sale of the series, the 2015 Rarities of the World auction, and with the appearance of an 1868 3¢ rose Washington B grill (Scott 82), the auction more than lives up to its name.

The stamp is one of just four examples, all used, that are known to exist. All four started their journey together affixed to an 1869 envelope mailed from Mason, Texas, to Darmstadt, Germany.

The auction series begins on Monday afternoon with 250 lots of U.S. stamps and covers from previous auctions “reoffered” by Siegel. A detailed note on the catalog cover explains that “Clear title will pass to all new buyers in this resale.”

Collectors unlucky with their bids in an earlier sale, therefore, might find a second-chance opportunity with this offering.

That 4¢ stamp includes attached selvage showing plate No. 1145 and part of the plate letter imprint in black at bottom. The stamp is “completely sound” and described as one of four recorded plate-number and plate-letter singles of the 4¢ invert, and the only one with the “Specimen” overprint.

The stamp is ex-Col. Green and ex-Cunliffe, includes a 1996 Philatelic Foundation certificate and a 2009 Professional Stamp Experts certificate, and is offered with an estimate of $11,500.

A number of U.S. revenue stamps are included in this first auction, with the standout being a gorgeous example of the $500 red-orange, green and black second issue, an uncommon stamp commonly known as the Large Persian Rug.

Tuesday morning brings United States carriers and locals featuring the Gordon Stimmell collection. The collection consists mostly of covers, but the front cover of the catalog displays an attractive reconstructed block of six of the 5¢ black on greenish yellow Pomeroy’s Letter Express stamp (Scott 117L1), identified as the largest recorded multiple, and offered with an estimate of $4,000 to $6,000.

The Tuesday afternoon sale travels a little further into the back of the book with the Wilson Born collection of U.S. telegraph stamps, a collection that Siegel president Scott Trepel describes as “awesomely wide and deep in content.”

The collection includes covers and stamps, with a number of nice stamp multiples included.

The sale itself is a rare opportunity for telegraph stamp collectors, but even more so on account of the two unique 1876 stamps of Colusa, Lake and Mendocino Telegraph Co. being offered: the 10¢ black (Scott 7T2) and the 25¢ red (7T3). Each is listed with the 2015 Scott Specialized Catalogue of United States Stamps and Covers assigned value of $9,250.

To complete the collection of the C.L. & M. stamps, the Siegel sale is also offering a selection of the 5¢ black (Scott 7T1), which catalogs for $1,300 per stamp.

The Larry Lyons collection of mail in the early West carried by private companies will be auctioned Wednesday morning. Among the many covers included are some wonderful examples of mail carried by the Wells, Fargo and Co. Pony Express.

In the catalog introduction, Bailar writes, “Basically, I was interested in anything that had Benjamin Franklin’s name or likeness and an interesting story.”

There are also handsome advertising covers and other postal history, Benjamin Franklin free franks, a free-franked folded letter from George Washington to Franklin, plus stamps and proofs, and two postmaster’s commissions signed by Franklin.

The Thursday afternoon auction brings in a selection of Civil War and Confederate States material, beginning with an envelope handsigned by Robert E. Lee as general on Christmas Day 1863. It is offered along with the original enclosure, a personal letter written and signed by Lee.

The auction series ends with the Rarities of the World sale mentioned previously. The world in this case covers mostly United States with some amazing classics, as well as choice foreign material.