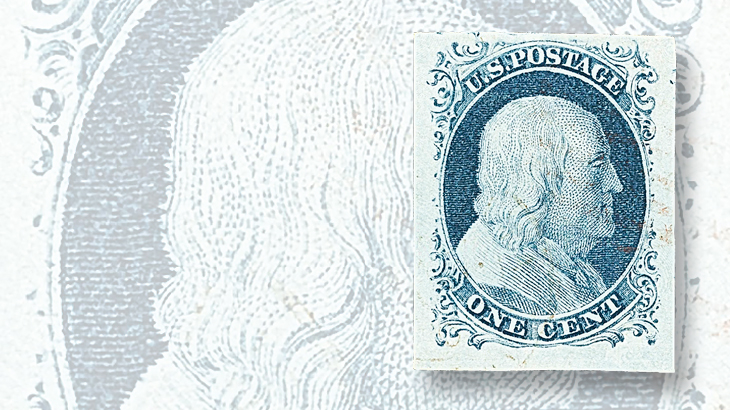 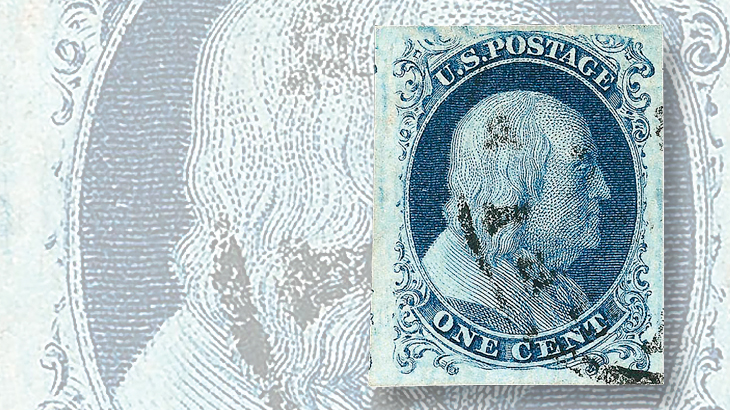 Robert A. Siegel Auction Galleries offered the Bowman collection for sale Sept. 29-Oct. 1. “One of the finest in existence” examples of the rare imperforate United States Scott 6 sold for $27,600. 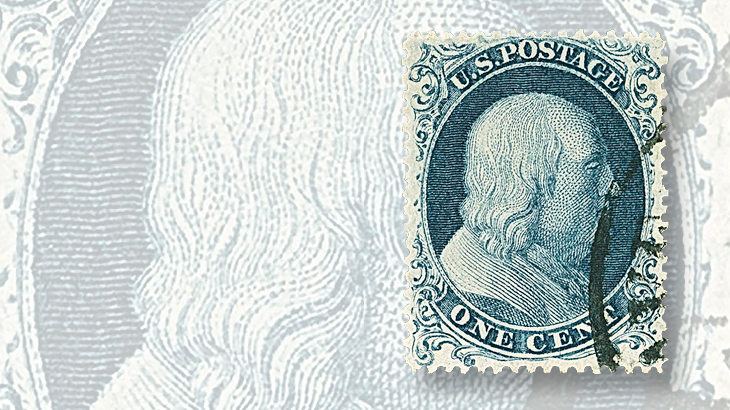 One of the few examples of U.S. Scott 19 well-centered enough to show the identifiers of the type brought $46,000 at Siegel’s late-September auction. The lot included the cover from which the stamp had been lifted. 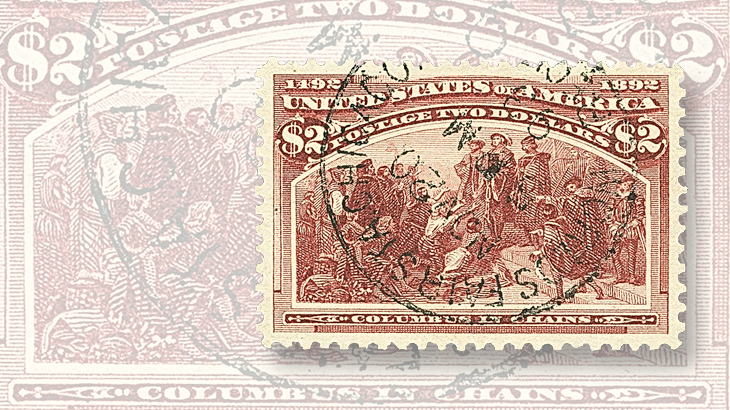 A used $2 Columbian issue from the Bowman collection brought $12,075 when auctioned by Robert A. Siegel in late September. Its clear impression and large margins earned it an expertizing grade of 98. 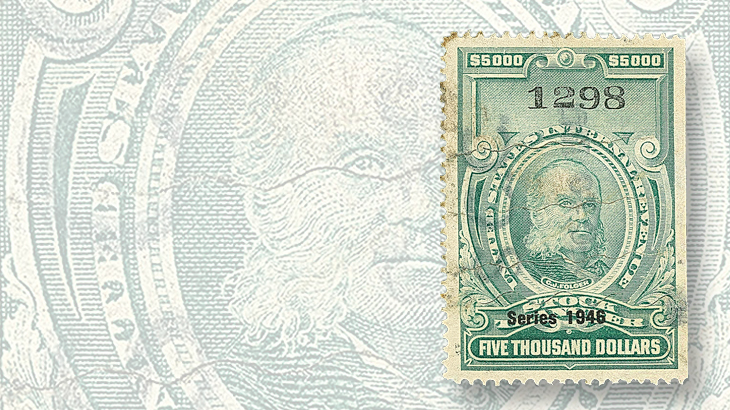 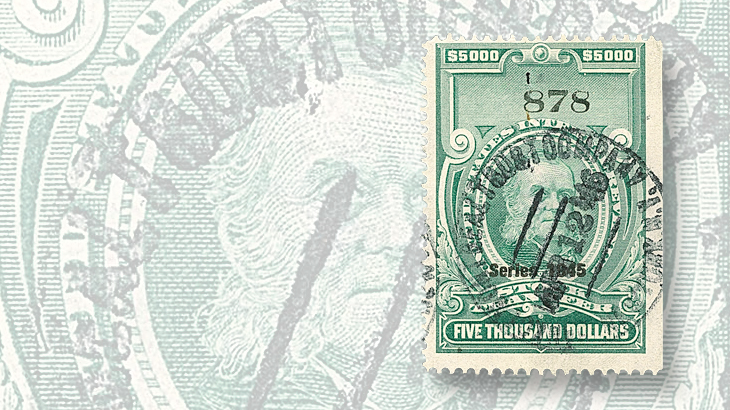 Treasury secretary C.J. Folger appears on the $5,000 stock transfer revenue stamp. This is the only known example with the 1945 overprint. Siegel hammered it down for $48,875 on Oct. 1. 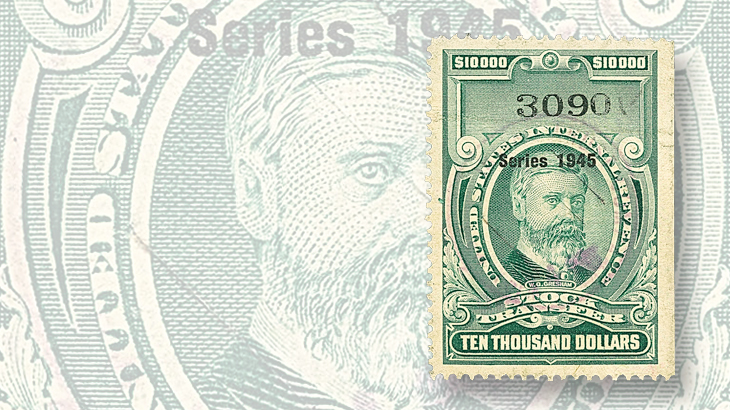 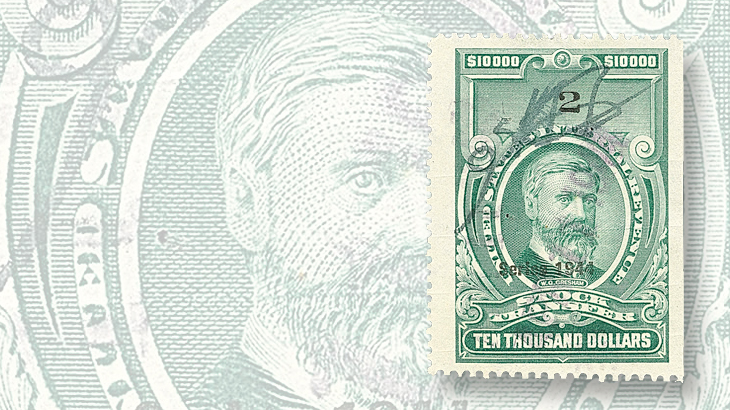 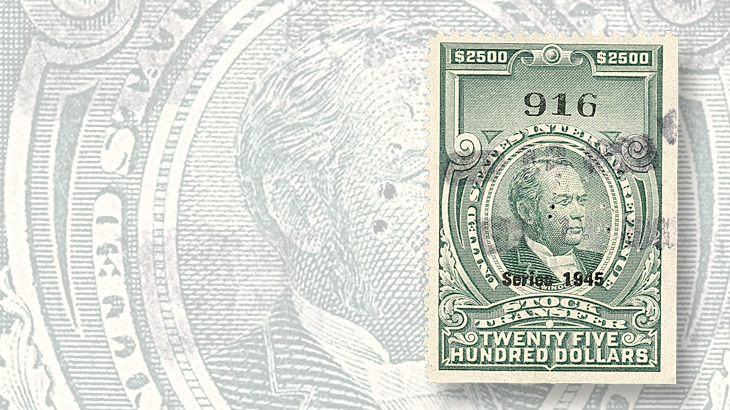 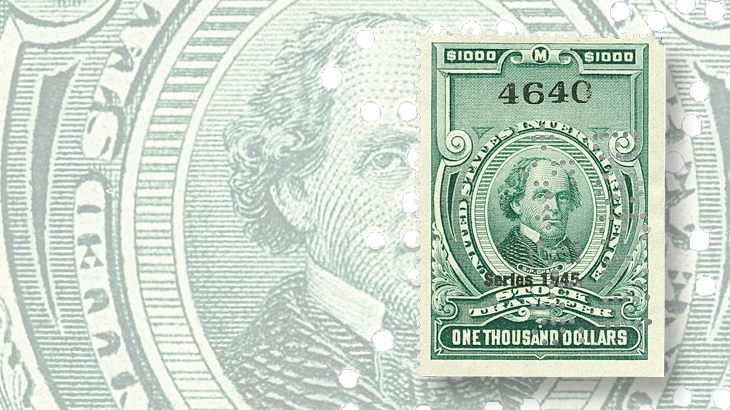 Robert A. Siegel Auction Galleries held a series of sales from Sept. 29 to Oct. 1 at their showroom in New York.

First served was the Robert Bowman collection of superb United States stamps, and they were indeed superb. There are few things more delightful to a stamp collector than having the chance to browse the kind of eye-candy offered by a sale of this caliber.

Top-priced items included rare examples of the 1851 and 1857 1¢ Franklin stamps known as Type Ia (Scott 6 and 9) with wide enough margins, especially at bottom, to preserve all the distinctive characteristics of the variety.

Nineteenth-century stamp production involved what we might today call artisanal methods, with results that naturally produced some variation from stamp to stamp. As the engraved design was transferred manually from the original die to the printing plate using a transfer roller, tiny imperfections would arise. The study of these varieties and what they reveal about the handicraft of the process is part of what makes classic U.S. philately so fascinating.

In the case of the 1850s 1¢ stamps, the fancy scrollwork at top and bottom or sides of the design often was partially erased in an effort to get all the stamps to fit onto the printing plate. Occasionally, some of the missing bits would be re-engraved by hand. Collectors classify the resulting varieties using Roman numerals I to V, with sub-types indicated by letters: Ia, Ib, Ic and so forth.

Thanks to decades of meticulous study, specialists often can tell which position of which printing plate a given stamp comes from, by looking at (among other details) how much of the scrollwork is absent and whether it has been recut. For this kind of determination to be possible, of course, the stamp must be whole: it cannot be trimmed or have perforations cutting into its design.

By the time the fourth printing plate for the 1¢ design was produced, early in 1857, the anticipated advent of perforations led to stamps being spaced a little farther apart. The way the design impressions were “rocked in” to the plate from the transfer roller resulted in stamps in the last row of the plate having nearly complete scrollwork at bottom. These stamps are classified as types Ia and Ic.

Perforating was implemented in mid-1857, so initial printings from plate 4 were issued imperforate. The imperf 1¢ type Ia (Scott 6) is rare.

An extremely fine example in the Bowman collection sale, described as “easily one of the finest in existence,” from the 99th position on the right pane of plate 4 (noted as 99R4), boasting huge margins and a light cancel, sold for $27,600, including Siegel’s 15 percent buyer’s premium.

Unfortunately, because the stamps in the bottom row of plate 4 were a little taller than average, their key distinguishing features were typically cut off by the perforations — to the chagrin of stamp collectors.

The lightly canceled example of the perforated type Ia (Scott 19) in the Bowman sale is from position 92L4. Graded extremely fine-superb 95 by Professional Stamp Experts and described as a “gem” and “a true condition rarity,” it is one of just a few examples well-centered enough to show the full identifying characteristics of the type.

Accompanied by the cover from which it was carefully lifted sometime during the 1990s, the stamp sold for an impressive $46,000.

Equally captivating were some of the more modestly priced items. An imperforate 1851 example of the same 1¢ design, showing characteristics of type IV with one-time recutting at top and bottom (Scott 9), boasts such monster margins and light cancellation that at first glance it could be mistaken for a die proof.

Rated “superb-98 jumbo” by PSE, whose population report for Scott 9 in that grade counts 18 examples, the stamp sold for $1,495.

Not only is it a marvelously clear impression within large, well-balanced margins (just three other $2 Columbian stamps share the grade of 98), it also has an exceptional postmark: a Chicago World’s Fair receiving datestamp used a month after the exposition closed.

Be sure to check out the full selection of eye-candy from the Bowman sale, with prices realized. Remember to brush afterwards.

Siegel offered the Kenneth D. Gilbart collection of U.S. stamp issues of 1847 to 1869 on Sept. 30. The most intriguing lot was the first item in the sale: a unique, large die essay of the 10¢ stamp from the first U.S. issue.

Printed on proof paper and mounted on a thin blue card, it appears to be the only known essay in private hands showing almost the full design of the 1847 Washington stamp, minus only the framelines, printers’ initials “RWH&E” at bottom, and a few lines of shading.

The Scott Specialized Catalogue of United States Stamps and Covers lists essays, probably made around 1895, of the frame alone and the vignette alone, and the Smithsonian’s National Postal Museum owns the famous models on which the finished stamps were based. The essay in Siegel’s Gilbart sale, listed but not yet valued by Scott, sold for $21,850.

The second part of the Dan Curtis collection of U.S. revenues was up for sale by Siegel on Oct. 1. Rare and unique stock transfer stamps of the mid-1940s commanded the top prices. These are among the rarest revenues, and the rarest U.S. stamps of any kind, in existence.

Stock transfer stamps were first issued in 1918, with the second series beginning in 1940, and discontinued a dozen years later. They have very similar designs to the red documentary tax stamps of the era, but are a uniform shade of currency green. Their elegant frames are reminiscent of bank notes and stock certificates; their engraved portraits are of 19th-century secretaries of the U.S. Treasury, most of them now obscure. The stamps are overprinted “Series 1940” (or the appropriate year) in small black type.

The lower denominations typically have a low or minimal value. Denominations up to $1,000, while not plentiful, are at least obtainable. Beyond that, the pickings suddenly get very slim.

All of the higher-denomination stamps bear a three- or four-digit serial number on a tablet within the design. They were distributed in booklets, resulting in one or two straight edges.

The $1,000 stamp depicts Salmon P. Chase, who served as Ohio governor and senator until Lincoln appointed him Treasury secretary and later Chief Justice of the Supreme Court. An example overprinted “Series 1945” (Scott RD208) and canceled by perforated initials (perfins) sold for a modest $287.50.

The $2,500 denomination portrays William Windom, a Republican congressman and senator from Minnesota and Secretary of the Treasury in the 1880s and 1890s (and great-grandfather to the namesake actor, with whom he shared a strong family resemblance). Likewise canceled with perfins, as well as a purple handstamp, the Series 1945 stamp (Scott RD208A) in the Curtis sale is one of only three examples known to survive in philatelic hands. It brought $14,375.

Five thousand dollars is the denomination on the next stock transfer stamp, showing C.J. Folger, who led the Treasury Department from 1881 until his death in 1884. The Curtis sale featured the only example recorded with a 1945 overprint (Scott RD208B). Called “one of the most important stock transfer revenue stamps in existence,” it is canceled with a 1946 circular datestamp and has a couple of negligible faults. It sold for $48,875.

The set maxed out at the $10,000 level, equivalent to about $150,000 today, adjusted for inflation. That represented a hefty tax payment, which helps explain why these stamps are so rare.

This denomination is graced by a portrait of Walter Q. Gresham, whose resume included serving as a Union Army officer in the Civil War, secretary of the Treasury, postmaster general, Federal Appeals Court judge, two-time Republican presidential candidate and secretary of State — no slouch, obviously, though it seems not to have earned him much in the way of immortality.

A vermilion $30 documentary stamp overprinted "Series 1940" in a black two-line handstamp in much larger type than normal (Scott R282a) and with a manuscript cancel "2-24-41/Crawford" was described as "a beautiful stamp," and possibly one of only two known of this rare variety. It sold for $26,450.

A spectacular used block of 18 imperforate $5 Probate of Will stamps (Scott R92a), with April 1, 1864, manuscript cancels, was described as the second-largest multiple known to exist (a block of 21 sold more recently by Siegel beats it; the next largest known is a block of six). Described as a “marvelous showpiece,” it sold for $3,335.