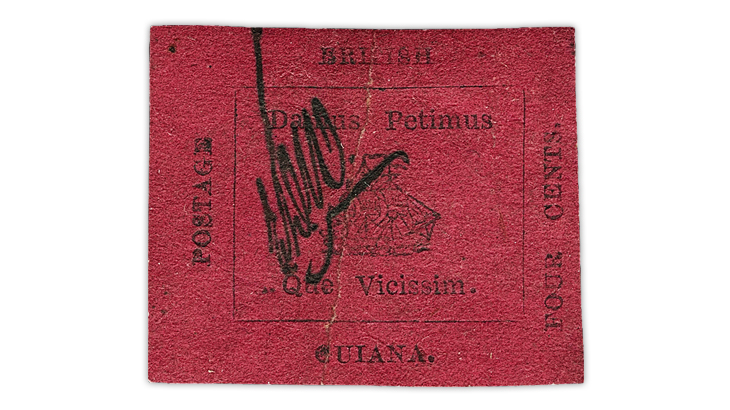 An unused example of the 1856 British Guiana 4¢ black on magenta stamp will be offered during the Dec. 10-12 public auction by Robert A. Siegel.

The three-day auction, held in association with Charles F. Shreve, will take place at the Siegel galleries in New York City.

The worldwide auction opens with a 1597 postal correspondence in the form of a folded letter mailed domestically from Norwich, England, to London.

The substantial selection of classic Britain includes numerous essays and proofs of the early line-engraved issues. One of these is the lovely 1871 2-penny Ormand Hill proof, die II retouched, printed in black on thin wove paper on card.

The nephew of Sir Rowland Hill, Ormand Hill was involved in the production of the world’s first postage stamps.

Among the British Commonwealth issues in this auction is a significant rarity: one of the seven unused examples of the British Guiana 1856 4¢ black on magenta (Scott 14) in private hands. The stamp is initialed by post office clerk Edmond Dalzell Wight with his “E.D.W.”

The 2020 Scott Classic Specialized Catalogue of Stamps and Covers 1840-1940 lists a value of $100,000 for the 4¢ stamp, with that figure in italics to indicate a stamp that can be difficult to value accurately.

The stamp is neatly cut to a rectangular shape. Siegel describes the stamp as having large margins and strong paper color, with a vertical crease that slightly cracked the paper but has been strengthened.

The rarity was formerly included in the collections of Alfred H. Caspary and Josiah K. Lilly Jr.