With full frame lines on three sides, this pair of the 1863 Confederate States 10¢ blue Jefferson Davis is offered in the Wishnietsky collection auction. 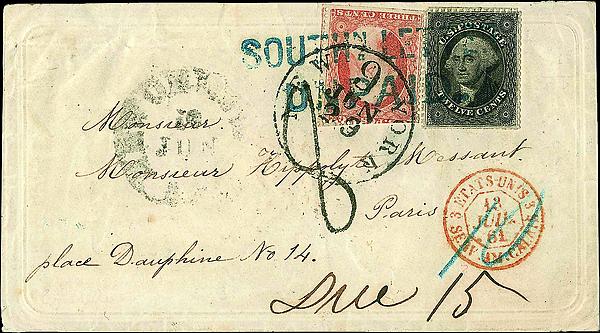 This 1861 “Southern Letter Unpaid” cover, one of only two recorded, is a highlight of the Benjamin Wishnietsky Collection of Confederate States Postal History, which will be auctioned Feb. 26 by Robert A. Siegel Auction Galleries in New York City.

Robert A. Siegel Auction Galleries of New York City will offer stamps and postal history of the Civil War era during a pair of auctions to take place Feb. 26 and 27.

The Wednesday sale will offer the Benjamin Wishnietsky Collection of Confederate States Postal History. All lots in the Wishnietsky auction are offered without reserves.

Wishnietsky was a leading collector, exhibitor and researcher of Confederate material. He was the editor of the 1980 Confederate States of America Stampless Cover Catalog, and authored Confederate Patriotic Covers and Their Usages in 1991.

Among the items offered from the collection is one of only two recorded “Southern Letter Unpaid” covers bearing the 1860 12¢ black George Washington stamp from plate 3 (United States Scott 36B). It is paired on the cover with the 1857 3¢ dull red Washington type III (26).

The cover is struck with the blue two-line “SOUTHN. LETTER UNPAID” handstamp tying the two stamps to the embossed envelope, which is addressed to Paris.

The cover is further marked with a “New Orleans La. 10 Jun.” (1861) circular datestamp, a blue crayon “10” for prepaid Confederate postage, a “New York 9 Jun. 29” debit datestamp that also ties the stamps, a manuscript “Due 15” (cents) marking applied in the United States, an “8” decimes due handstamp applied in France, a red July 13 French transit datestamp, and July 13 Paris receiving backstamps.

Siegel notes as “totally inconsequential flaws” trimmed perfs at top on the 3¢ stamp and blunted bottom perfs on the 12¢ stamp. The cover is offered with a presale estimate of $30,000 to $40,000.

The extensive postal history selections in this sale are accompanied by stamps off cover and proofs, including a used vertical pair of the 1863 Confederate States 10¢ blue Jefferson Davis with frame line (Scott 10). This example includes full frame lines on three sides and is struck with a May 1863 circular datestamp.

Described by Siegel as having a very fine appearance with some defects, the pair comes with a 1978 Philatelic Foundation certificate and is offered with an estimate of $6,000.

The auction features Charleston material from the first year of secession, beginning with a cover postmarked in Charleston Dec. 17, 1860, the day the convention convened in the city that would declare secession three days later.

One item is the 1861 5¢ blue lithographed stamp (Scott 16X1) used on patriotic cover, one of only two examples known. The cover is postmarked Charleston, Nov. 11, 1861, and is described by Siegel as one of the great rarities of Confederate postmasters’ provisionals.

Lot for both auctions can be viewed at www.siegelauctions.com, and files of the catalogs can be downloaded. Additional information is available from Robert A. Siegel Auction Galleries, 60 E. 56th Street, New York, NY 10022; or e-mail stamps@siegelauctions.com.