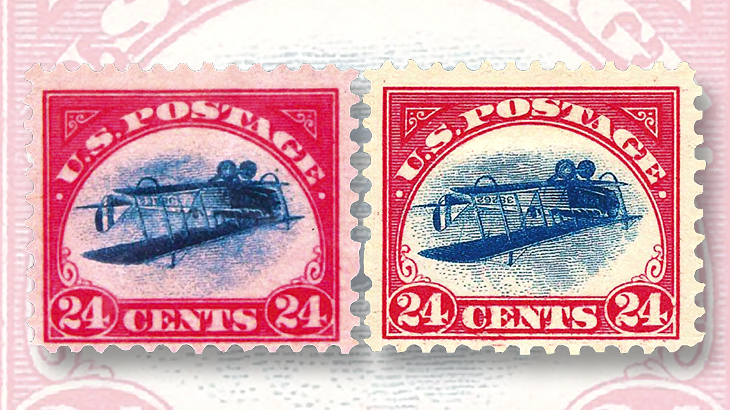 The single missing perforation between these two stamps from the 1918 Inverted Jenny sheet of 100 acts as a clue that might unravel the mystery of how the famous airmail error was created. Image courtesy of Robert A. Siegel Auction Galleries/www.InvertedJ

Robert A. Siegel Auction Galleries has developed a terrific new online reference site devoted to the Inverted Jenny: the rare 1918 24¢ carmine and blue airmail error stamp that shows the Curtiss Jenny airplane in the central vignette flying upside down.

The information published at www.invertedjenny.com provides detailed background about the 100 error stamps discovered in a single sheet by collector William T. Robey on May 14, 1918.

The new website offers five main sections for collectors to explore: History, Production, Discovery, Sale records and Biographies. All are illustrated with historical photos and pictures of the stamps involved.

Siegel president Scott R. Trepel told Linn’s Stamp News that he expects to add more information to the site to encourage visitors to return again and again. He wants to include a section about the upright variety of the $2 Jenny Invert stamp issued in 2013, and has plans for a downloadable curriculum about airmail and the original Jenny stamp that teachers can use in the classroom.

The site’s current History section presents a lengthy but well-written history of early airmails, starting with the 1859 mail-carrying balloon Jupiter and continuing through the airmail service sanctioned by Congress that began in 1918.

The Production section zeroes in on the development of the 24¢ Jenny stamp, created in 1918 specifically for the new airmail service.

There has always been speculation about how the invert error was created, but as the site explains, it’s not possible to know with certainty exactly what happened that resulted in the inverted airplane vignette. Trepel believes, however, that it wasn’t just a matter of one stamp sheet positioned incorrectly on the press.

“In the past I’d avoided the issue of ‘how did it happen?’” Trepel told Linn’s. “The more I studied and analyzed it, I decided … the plate was turned around.”

How he came to that conclusion is convincingly described on the website. Photographs make it all easier to understand, including one that documents the absence of a single perforation hole between two of the stamps from the sheet.

The Production section also includes information about the designer and engravers who worked on the stamp, the process of manufacturing the printing plate, and even the debate about the true day of issue for America’s first airmail stamp.

This all leads quite naturally into the story of Robey’s purchase of the sheet of 100 inverts, in the section titled Discovery. A collector eager to obtain the new bicolor airmail stamp, Robey wrote to a friend days before the stamps were placed on sale that it would be a good idea to watch for inverts, considering that two different plates were used to print the stamp. The website tells the story of his lucky find, and follows his efforts to find a buyer for his sheet at what he considered to be a fair price.

The interactive page of sale records opens up to a reconstructed sheet showing 98 of the 100 stamps, each pictured in the most recent photograph known. Photographs have not been found for two stamps, from positions 49 and 79, and their whereabouts since being sold to Col. Edward H.R. Green in 1918 are also unknown.

“Position 49 — that should be a beautiful stamp,” Trepel said. It’s from a section of the sheet that includes invert stamps with terrific centering, such as the position 58 stamp that Siegel is offering during its May 31 auction at World Stamp Show-NY 2016. That stamp has been nicknamed “Jenny 95” in reference to the XF-Superb grade of 95 it received on its 2005 Professional Stamp Experts certificate, the only Jenny Invert to obtain that lofty grade.

By clicking on any of the stamp pictures you’ll get an enlarged image and the stamp’s entire known history, including extra photos, condition details, a historical summary, a list of owners, a list of certificates issued, sales transactions with current catalog values and prices realized, and a “graph of realizations for this position in relation to catalogue value.”

The Biographies section identifies the many past and present owners of the 100 Jenny Invert stamps, where known, an illustrated list that includes more than 180 names. Some are quite well known, including William H. Gross, Robert E. Zoellner, and Donald Sundman. For a few, little more than their names are known.

The Inverted Jenny website continues the Siegel company’s commitment to research and record-keeping that includes The Siegel Encyclopedia, stamp census data, a power search, and more that can be found on the firm’s home site at siegelauctions.com.

Along with the launch of the new Inverted Jenny website, Siegel recently posted two new YouTube videos with information related to the famous error. The first was published May 12. It’s less than five minutes long, but gives an entertaining history of the famous error stamp and the inauguration of airmail service in Washington, D.C.

The second video is even shorter.

It features Trepel in a small plane flying alongside the actual Jenny airplane that will be displayed during World Stamp Show-NY 2016 in New York City.