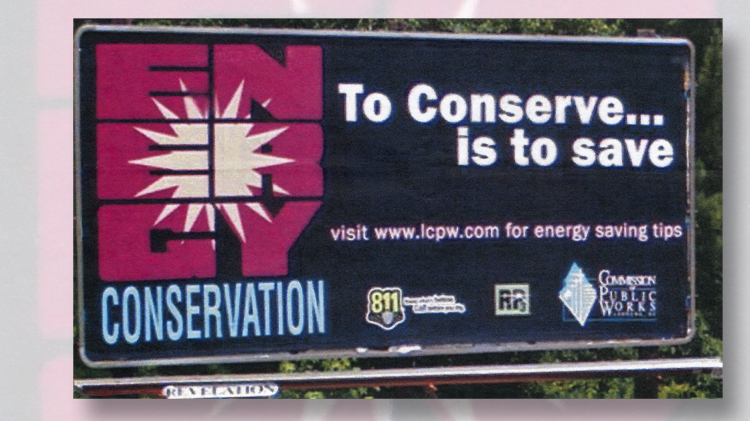 This 2012 billboard seen in Laurens, S.C., appears to use part of the 1974 Energy Conservation stamp design. Was this logo adopted by the energy conservation community? 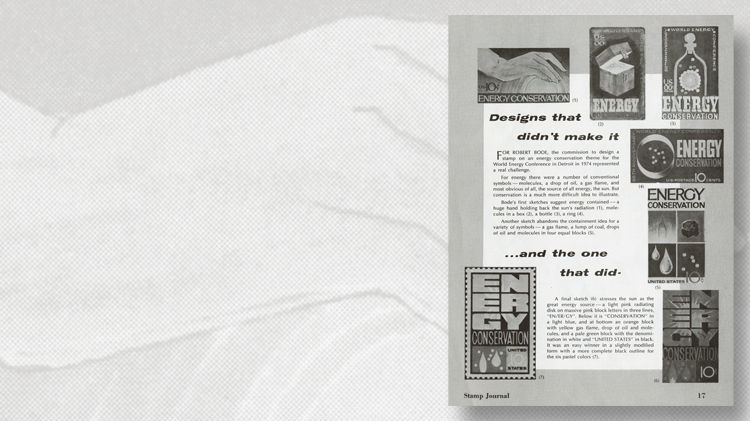 Unaccepted designs can be a fascinating window into the stamp-design process. This 1975 article pictures attempts that led to the final design of the 1974 Energy Conservation stamp. 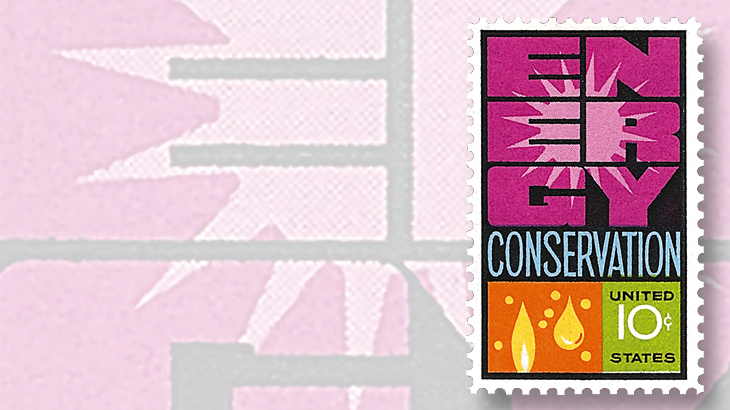 This colorful 1974 10¢ stamp recognizes the World Energy Conference held that year in Detroit, Mich.
Previous
Next

Energy Conservation was the theme of a striking 10¢ commemorative stamp issued Sept. 20, 1974, in recognition of the World Energy Conference held in Detroit in September of that year (Scott 1547).

The illustration on the stamp was the work of  graphic designer Robert W. Bode. The Scott Specialized Catalogue of United States Stamps and Covers describes the design as showing “molecules and drops of gasoline and oil.”

About a month before the stamp’s issue date, Samuel A. Tower, The New York Times stamp columnist, wrote: “The new stamp, with colors of incandescence like the fires bursting out from the rim of the sun was designed by Robert W. Bode of Chappaqua, N.Y. who previously designed the Johnny Appleseed and Davy Crockett stamps [Scott 1317 and 1330, respectively] in the American Folklore series.”

Other designs considered for the Energy Conservation stamp were shown in the Minkus Stamp Journal, Vol. 3 of 1975, as part of the regular feature called “Designs That Didn’t Make It.”

That article said of the sketch on which the stamp design was based that it “stresses the sun as the great energy source — a light pink radiating disk on massive pink block letters in three lines ‘EN/ER/GY’.

“Below it is ‘CONSERVATION’ in a light blue, and at bottom an orange block with yellow gas flame, drop of oil and molecules, and a pale green block with the denomination in white and ‘UNITED STATES’ in black.”

Now comes a note from Linn’s reader Jerry Riddle of Anchorage, Alaska, who reported that in 2012 he saw the billboard that is shown with this column.

The billboard was located by a roadside in Laurens, S.C., and credited to the Laurens Commission of Public Works. When Riddle returned to the area in 2013, the billboard had been changed.

After seeing the design of this billboard, I wonder whether the Bode stamp design has been adopted by the energy conservative community and if it has been found elsewhere.

Of course there is another possibility: Perhaps Bode used an already existing logo in designing the stamp. If that’s the case and a Linn’s reader can document it, I would be equally interested in a report.